Have You Reached Out to Your Mom or Dad's Friends ?

I drop by the store, not because it's the closest Wal-mart, but to visit with

his co-workers who miss him so dearly.  After he passed, I had Mom contact the local newspaper and reporter phoned and they ran a very nice article about Dad.

My Mom had 1 very close and dear friend who lives in the same town that she did.

Over the past year, I have called that friend at least once a week.

It's helped us both over the past year.   I love to hear Mom's friend reminisce

about their bingo outings, or trips to the doctor.  I gave this friend a copy

of a photo of both my parents.   She is a widow herself and lives alone.

every morning.  She LOVES the photo.

If you've not reached out and connected with any of your parents friends,

give it a try.   Perhaps first by sending a card or note in the mail letting them know

anytime they would like to talk, you are there for them. (Include your number)

I've attached a photo of Mom and 'S' from the day of my Dad's funeral.

Mom invited 'S' to ride with the family in the limousine.   'S' is originally from

West Virgina and that morning she said....  'My goodness, I've never ridden

in a limo before'.   It was so sweet.   I jumped up right after she said that and snapped this photo of my Mom and her.   Mom is in red and 'S' is in blue.

Mom and her friend 'S' -  The day of Dad's funeral 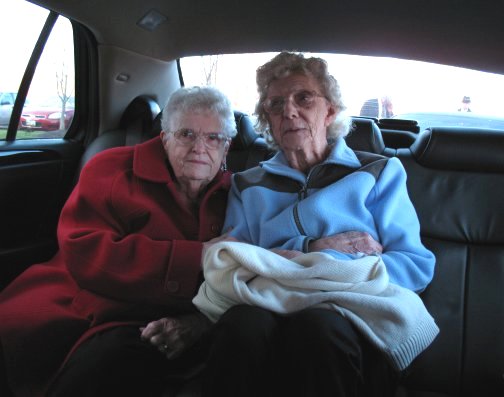