Steve I love the planter, I think Im going to do that, what website did you find this on

This is sort of for Sara, who mentioned her dreams and fear of drowning. I have just reread all these compelling posts..and I remembered something I had forgotten. Mostly this scene is played out in older movies..it doesn,t matter what time period is depicted..it is always the same. It is a peaceful  little village..in any small village in any country...Asian, African,  western, Middle East, the British empire, whatever..but it is always the same. The village people are at the well, socializing, getting water, having a pleasant day..WHEN YOU HEAR THE RIDERS ON THEIR HORSES coming. Even as a little kid, I would scream inside my head..”RUN AWAY! HIDE! there were never guns,,only SWORDS!

i could not watch this carnage, even if it wasn,t really shown on the screen..it was the screaming, and the slaughter..that wasn,t really shown it was a lauded to, but I knew  they were dead, and some were BEHEADED. That is how either how I died in a post life, or saw everyone die I know it. Even as early as childhood, I will never wear a tight necklace, a scarf colar..and to me being beheaded is the worst way to die. I can barely think of it.

back to Sara’s post..about seeing people in dreams that she knows she once knew..how wonderful that must be. And the thought of parallel universes..ever see the TV show SLIDERS? I find that riveting.

One of the things Edgar Cayce says, is that we have lived on many different planets. The idea that only earth is inhabited is ludicrous. We were,tmeant to know..we would just screw it up.

there is a wonderful older movie which is a Science Fiction movie, but the real message is about love and acceptance and iswonderful. It is called “Enemy Mine” with Dennis Quaid and Lou Alzader...it gets a bit muddled, and there is a lot of gratuitous scenes about slavery...but the main message is no matter what our species, intelligent life is not so different after all.

Steve ...  The planter is absolutely beautiful and I know Mark is smiling down at you always.  Thank you so much for sharing.

I honestly believe that our spouses are near us and especially when we feel at our worst.  Believe!  Hope you are hanging in there and feeling a little better.

Steve......I love this planter.  What a great tribute to Mark.

Chuck.....Very well said.  I too love our family here.  We can talk about anything without judgment.  It's refreshing and what I consider my safe place :) 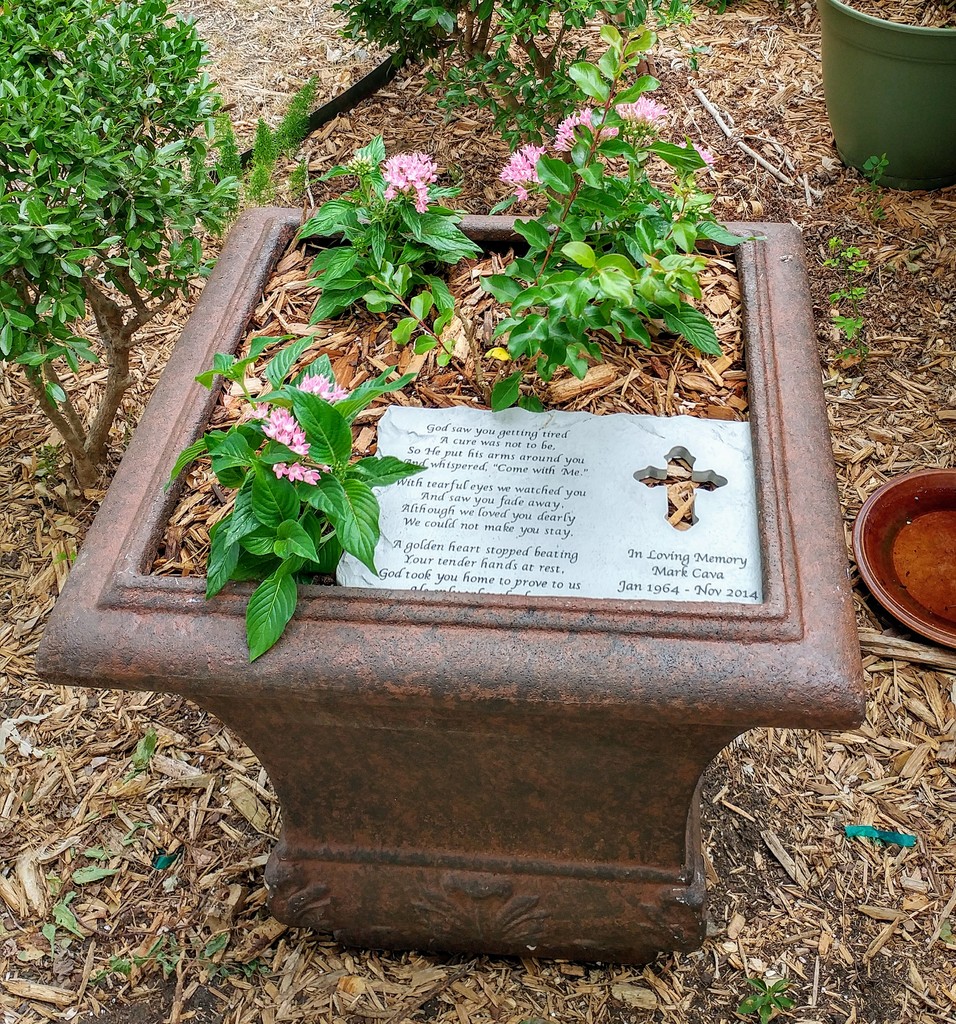 This is a picture of the planter where I placed Marks cremains in the Bio Urn.  The crape myrtle will become his growing memory.

Chen Yan is now a member of LegacyConnect
Friday
Welcome Them!