I ask a rhetorical question, because I know the answer for all my Legacy family is “yes”.

Have you had a thought – a memory – so completely and unexpectedly overtake you that you temporarily lost contact with where you were, what you were doing, even your own identity? The person standing there in present day is gone, replaced by someone young, idealistic, and terribly and completely in love for the first time?

I had such a moment today, but it was not about my beloved Larry whose loss led me here. No, I was a young man, still a boy really, spending the summer in a small town in the Berkshire Mountains in Mass. I had befriended another boy with fine hair so blonde it was almost white, sensitive blue eyes, and what looked like a million freckles. He took me on long walks through the woods, along streams and over steep mountain trails, never getting lost and teaching me how to step silently so as not to scare away the wildlife and birds he showed me. His nature was gentle, his manner quiet, and his laughter easy and genuine. As our friendship grew over the summers we had together, I came to realize that I was hopelessly in love with him.

I finally told him of my feelings, and he confessed having the same feelings for me – but that he wasn’t gay. I suppose we could be viewed charitably by some as star-crossed lovers. In time he met a girl, moved across country, and had a daughter. We stayed in touch, and he became for me a question that would never have an answer – what if?

In 1999 I received a phone call two days before my January 24th birthday from his sister. He had killed himself on January 19th. A part of me died the day he did, and my questions about why will never be completely answered.

Ghosts of the past do not limit themselves to appearances at Christmas - they visit unbidden but not unwelcome. Such a ghost touched me this morning, and the lingering emotions stirred have yet to be still. With it came a tear to the eye, a pain to the heart – and a small smile to the lips. Also accompanying it was this - simple question that will circle within while I draw breath unanswered… 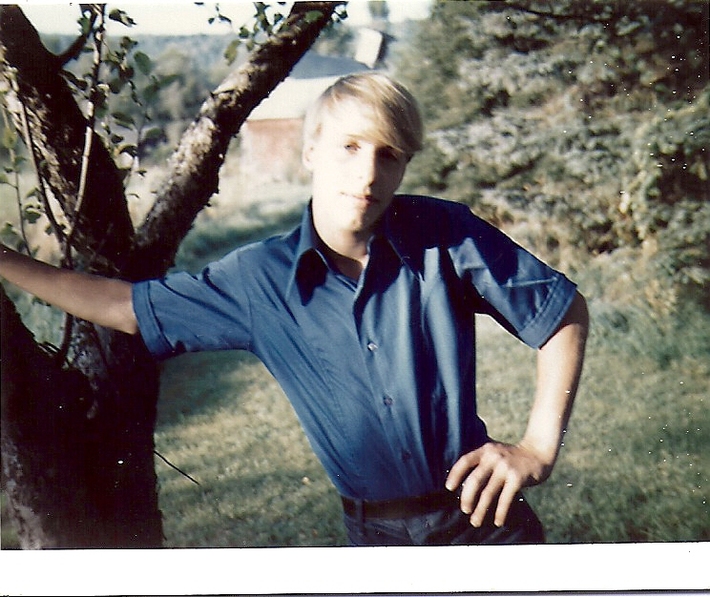 Mary Jane...the pillow is 12x16 so it's not too big.  I ordered it from Shutterfly

What an amazing pillow! Very cool!

That is WONDERFUL! I’ve never seen anything like that, and it came out very clear! The fabric must be very special, to have such clarity and color.,How large is it? Beautiful.

Sara ...  What a beautiful pillow!  A great idea and I love the words and the photos.

Sara ... I'm so glad that you enjoyed the Youtube and am a believer such as I am.  All those things that happened to your friend Diana, I am sure is Ken getting a message to you.  Most of us expect our spouses to just show signs to us, but now I realize their messages can come from others as well.  So happy you had this experience.

Pillow.jpg  I'm not sure how well this picture will come through but it's a pillow i ordered for myself, kind of like an anniversary/memorial gift for me. I attached the pic as a link and also attached it in the body of the email.  It's hard to see what it looks like while typing in this little box. 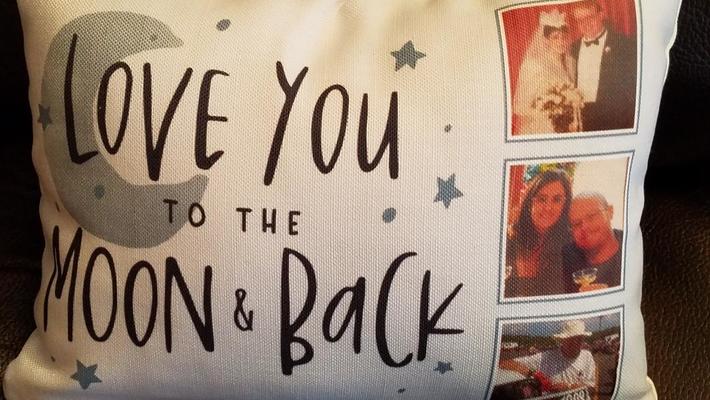 Marsha....I looked at the video and I've always been a believer, even before losing Ken but more so since.  In fact, on the 5 yr anniversary Wednesday, I was wondering if he was going to send me a sign that he was there.  He made his presence known, not directly to me but through my friend of 37 years, Diana.   Last week, Diana was cleaning out a drawer in her husbands' office and found the prayer card from his funeral service.  A couple days later she opened a drawer in her kitchen and found her copy of the prayer card.  She read it and placed it on a table.  On Wednesday, she saw a flash by the window and when she looked outside, she saw a cardinal sitting on a machine in her back yard.  Then, also on Wednesday she was putting a coat on and the prayer card she placed on the table fell off and landed at her feet.  Ken was really pounding home the fact that he was there.  He knew Diana would recognize his presence and let me know.  Like the man in the video who was tapped on the shoulder, Ken went through Diana to get the message to me.  He was always a character with a huge sense of humor so I think he had some fun with it.

It is wonderful to see you post and I know how you long for Joseph as I do Ernie and the rest of us here all feel this most of the time.  I try to remember what I learned from Ernie throughout our years and the good spirit he had and I feel I need to act on those lessons and carry the torch for him.  Joseph was such a good man with wonderful qualities (I feel I know him from all the posts you have made) so my dear, carry that torch for Joseph,  I believe one day we will see them again.

I am hanging in there, but being retired and a senior it's tough at times just trying to keep active.  Everything was going much better with my volunteering until Covid came along and changed all our lives.  So far I am lucky and healthy.  We wear masks here, but are more liberal than our neighbor in the U.S.A.  I can shop in a mall if I want and have gone to Costco; walk the dogs a lot weather permitting.  The dogs are my saviors cuddling up with me in front of a fire in the evening.  I miss seeing my friends like all of us do and do keep in touch by phone or email.  I am able to see my small immediate family as they are considered to be in my 'bubble.'

I do pray for everyone on here and in America and hope soon all this will be behind us so please keep safe and know Joseph is there and all of us will make it.

Much love & Hugs my friend

To my Angels on this forum:

Many of us wonder if our spouses are close and this video says it all.  So, please, listen to that silent message you may receive and act upon it like this man did.  I am a believer that in one form or other our spouses make contact with us every so often and it can come in different forms.

I  hope this gives all of you hope that as I said before our loved ones are in our hearts.  They have not forgotten us.