Creating a Caring Space through Prayer 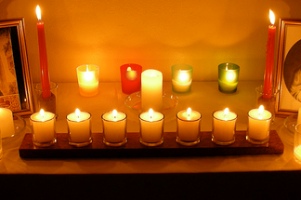 One summer I was visiting in North Carolina from California, and my granddaughter Jennafer was attending day care at the Baptist Church. I would frequently pick her up there in the afternoons. In the lobby, I saw a long list of names on a bulletin board. At first I thought they were probably people who gave to a building fund. Then I saw the heading over the names. It read, “Intercessory Prayers.” Intercessory prayers are those offered on behalf of others. I read the names then with a prayerful attitude, knowing that each was in need of strength or healing for reasons I did not know.

Several years ago, before Eastern Airlines got gobbled up, the company was in a state of some distress. As I checked in for a flight, I asked the woman at the counter how she was doing. The tears began to flow, and she told me she was looking for another job. I went to the boarding area to wait for my flight and was surprised when she came over to me. Apparently she had seen “Reverend” next to my name. She told me that she had changed my seat to first class. Then she said, “Pray for me, Reverend.”

I told the young woman I would pray for her, and I did.

I like the way the Quakers express it. “I hold you in the Light,” they say. That’s a beautiful concept.

I do not always pray for people in the traditional way, but I keep a written list of the names of those I want to hold in the Light. It goes on a tag that I stick to my desktop, where I will see it several times a day. As I say people’s names, I hold them in the Light. This is more than thinking of them or caring for them or wishing them health. I call on a transcendent and mysterious power that I cannot name.

Scientific studies have been conducted to determine the power of prayer to heal people with illness. Some of these studies have demonstrated that even when people were not aware that others were praying for them, they have shown greater improvement than those in control groups.

This research suggests that somewhere in the mysteries of our universe, there might be a power – a healing power – available to us. It suggests that if all who gather in a community of caring offer a prayer or hold one another in the Light, it makes a difference.

Whether or not you pray, it is important to hold those who suffer or grieve in the Light and to say out loud, in another’s presence, that you are doing this. Light a candle and say a name – that is enough. Or join in a circle, inviting images of love and gratitude into the circle. If you are comfortable using that circle in a physical way to embrace a person in pain or grief, do it. If not, try doing it in words. I have participated in many communities where healing circles were offered. On a few occasions, feeling the need for the physical feeling of being held in the Light, I entered the circle and felt the loving energy that gathered in the center where I was held and held up. It works. Whether prayers are spoken, chanted or offered in a silent touch, this circle of caring works. There is a remarkable power in the sense of spiritual connection with others, known and unknown.

My colleague Rob Eller-Isaacs says, “I don’t really know if prayer makes things happen. But I have no doubt, prayer makes love flow.”


Also by Sarah York:
• Giving Sorrow Words
• When an Infant Dies
• When a Teenager Dies
• Planning a Memorial Service after a Suicide

Sarah York is an author and Unitarian Universalist minister. Her book Remembering Well: Rituals for Celebrating Life and Mourning Death

, now available in a new paperback edition, speaks to people who do not want a religious or spiritual context for ritual as well as those who do. The book received outstanding reviews from numerous publications, including Publishers Weekly, USA Today, The Washington Post, and the American Journal of Hospice and Palliative Care. Ms. York is semi-retired and is available as a keynote speaker and workshop presenter on topics related to her books.