Loss of Our Assumptive World 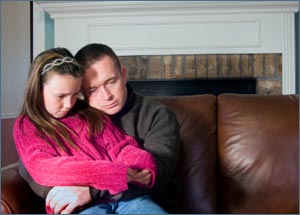 When my mother, ten years younger than my father and in good health, surprised everyone by dying first, I felt she—and my sister, brother, and I—had been betrayed by life. We had expected to have her with us at least a decade after Daddy died. Perhaps we could help make up some for the years of sacrificial care she gave our ailing father. She’d go with us on trips, which she loved to do. Even in her late seventies she still imagined that she might take a course or two at the local community college. I could imagine helping to make that possible when our father died. I was surprised at how angry I became when we got to do none of these things. I was also surprised at how many years and how much work it took for me to handle that anger. Sensible? No. Understandable? Yes. My assumptive world had been logical; it just had not been realistic. (Excerpt from Tough Transitions by Elizabeth Harper Neeld)

When we are dealing with loss, we know what we have lost in the outside world. We miss a person and everything that entails. What we are often surprised by is that, in addition to losing a person, we have lost something internally. We have lost the rudder that guided our lives.

What we think of as a rudder can also be thought of as the assumptions on which we based our lives, assumptions that seemed firm and dependable until they suddenly weren’t. I think of the deck on the back of our house. Ordinarily, I don’t go around thinking about the framework of that deck. The structure is just there. Until one day I see termites swarming on that deck. Then I start to think about the posts that hold up that deck and the foundation on which the deck is built.

The assumptions each of us holds about how life works can be compared to the structure of a deck on a house. What kinds of assumptions are normal?

I will grow old with this person.

Family members will be helpful.

Friends will always be there for me.

Now, if you pin us down, we know these assumptions don’t always hold. We all can give examples of more than one of these assumptions that did not prove to be true. But the fact is that it is normal for human beings to act as if the assumptions by which we live can be counted on. It is these mental maps, our assumptions, that shape our daily actions and thoughts without our realizing it. When a loss shatters that assumptive world, we suddenly find ourselves questioning everything we lived by in the past.

Building a new assumptive world takes time. We have to identify and examine all the assumptions we have unconsciously lived by and decide which of these continue to hold true for us and which must be jettisoned, clarified, or amended. We have to examine and reflect on what we now believe, what we now know. When we have done this, we stand on an even more solid foundation of a life that has been examined. Until that new assumptive world can be built, however, we feel as if we are living in Pogo’s “Land of the Trembling Earth.”

How to Think About Rebuilding Our Assumptive World

A young man whose father died and who himself had just recovered from a life-threatening disease told me:

Then something comes along to contest that clause. With no warning, with no signs pointing to it….All of a sudden everything is shattered….So I have realized that the clause has gotten canceled, and I have to rewrite the contract completely. The whole contract with life has to be renegotiated because none of it makes sense any longer. I’m now in the process of doing that renegotiation. (Excerpt from Seven Choices by Elizabeth Harper Neeld)

Related articles:
• The Purpose of Grief and Mourning
• Family Reorganization After a Loss
• The Grief of Sibling Survivors
• When an Infant Dies
• The Grief of Grandparents

Also by Elizabeth Harper Neeld:
• How Can We Hope When There Is No Hope?
• What Helps When We're Experiencing the Unthinkable
• The Value of Reminiscing
• What About This Thing Called 'Acceptance'?

- she is committed to work that helps lift the human spirit.
Author's photo by Joey Bieber

Though I thought I was appreciating each day I was able to share with my Sister , now I wish or know that maybe I did not . She sadly passed away just a few months ago . The assumption that we would we grow old together and laugh about who has more gray hair or who can remember what . Well we were wrong .  She had been sick yet for some reason she endured time after time so only to assume each time going into the hospital we would go home together , no we wrong.   The belief that medicine would have ways to take care her , we were wrong . I thought her wishes  would be heard and respected as would be too , I was so wrong .  I thought my words would be heeded for her so that her life could go on , No I failed and was so wrong !!       Even as she lay there the last few days as they told me that they decide that they would stop all treatment , I assumed that they would continue , I was wrong. I assumed that others would understand the pain with out her ,  I was disappointedly wrong . That I could some how change it all as some her last words to me when " we go home " no I failed and assumed and was so wrong   Though I sit here now remembering how she lived trying teach me that sometimes having expectations is only going to hurt . Which now if only time in life she was so right .   To want family and friend around was and expectation that I assumed would be there , only to learn that it is what it was before she died so why is it that I would want anything different . My question is why can we not hope in life.  The only hope I had and saw was when she was here .  She saw beyond what others had or did not have and was able to accept yet still felt the pain . I am one that hold all the pain inside both her and mine .

One thing is not and assumption that what ever love I have now in my shattered heart for my Sister will be always and forever .     Knowing that is where it will stay .Something no one can take away