Suicide Survivors: Running Through the Pain 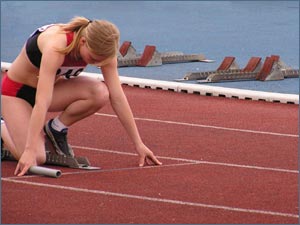 To the majority of viewers who watched the Olympic Games coverage from Sydney, Australia, Suzy Favor-Hamilton was simply the woman who fell in the last 150 meters of the 1500-meter final. But for Suzy and other suicide survivors, her fall resonated much more deeply than any physical ailment.

In a sense, the fall was the culmination of Suzy’s attempt to cope with her brother Dan Favor’s suicide on Sept. 9, 1999. The death changed her life in ways she couldn’t understand until returning home from Sydney.

“I was upset [when he died], but I was training for the Olympics so my focus was still on the Olympics,” she said in a phone interview from her home in New Glarus, Wisconsin. “In my head, I thought, I have to keep training. My brother died. I have to do this. I can run and do really well and honor him. I thought the better I did, the more I could honor him and the better my family would feel. Maybe I could make all the pain go away.”

She continued: “It’s silly thinking, but in my head, that’s how I was dealing with his death. The running for me really blocked everything out. I would go in my world and train, train, train. That was my outlet.”

Suzy, 32, finished second in the 1500 at the U. S. Olympic Trials and was considered a medal contender at Sydney. She made it through the preliminary rounds into the finals, and even led going into the final stretch. But in the last 150 meters, as other runners passed her, she found herself on the ground. She managed to get up and finish the race, not knowing what had happened or why. Later, she would discover that she was severely dehydrated.

“This is the first week I realized I put all this pressure on myself to win because I thought that was the only way I could honor my brother,” she said, three weeks after that night in Sydney. “That was so much for one person to carry on her shoulders. It’s a good steppingstone to realize my brother wouldn’t have cared which place I got in the Olympics.”

Dan was 37 when he jumped from a nine-story building in Wausau, Wisconsin, where he had convinced a janitor to let him in and watch the sun rise. Suzy had been training at the University of Wisconsin, in Madison, when she called her husband Mark to chat, only to find he had been called away from work. When she finally reached Mark at home, he told her the news.

Her brother, the oldest of the four Favor children, had suffered from manic depression the majority of his life. Five years separated Suzy from her brother — Suzy is the youngest with sisters Carrie and Chris in between — but she has fond memories of her childhood with him. Dan liked to tease his youngest sister, but he also allowed her to ride on his motorcycles with him.

“I always remember him being this daredevil; always taking me out in the country and going really fast,” she said. “He had this great adventure side to him. Just his need to be on the edge.”

But Suzy acknowledges there are some sad memories because of Dan’s illness. There were shock treatments and a stream of doctors as her parents sought to help their son. She also remembers his paranoia and his childhood habit of opening and closing doors or continually straightening things. He was put on medication 15 years ago.

“It’s hard on the family to see all this going on, especially at a young age. In my own little world I tried to block everything out and that was my way of not dealing with it. And running was such a big part of my world that I could just go for a run and it would take away everything,” she said.

Indeed, Suzy’s life revolved around running. She was a top prep runner before leaving her hometown of Stevens Point, Wisconsin, for the University of Wisconsin. After winning 11 Wisconsin state titles as a high school runner, Suzy added nine NCAA championships and 23 Big Ten titles to her resume. A three-time Olympian, she is also a six-time U.S. national champion and only one of two American women to run under 4:00 in the 1500-meter run (3:57.40 in 2000).

After going to college and then moving to California with her husband, Suzy says she only saw her brother on holidays. They talked on the phone when they could: They had their own lives, making steady communication impossible.

Recently, however, when Suzy and Mark moved back to Wisconsin, she began to draw closer to her oldest sibling. They shared a love of art and dogs. They also e-mailed constantly.

“I feel like I was the closest to my brother the past few years,” she said. “I saw him about a week before he died. My parents and I went up to his house for a picnic. My last memory of my brother is I gave him a big kiss on the cheek and told him I loved him.”

Dan’s medication caused him to gain about 40 pounds in the last year. He had been very conscious about his appearance, so Suzy knows he didn’t like the way he looked. “But right before he died, he looked really good. He was biking ten miles a day,” she recalled. “It didn’t surprise me [that he was in good shape] because I knew he had it in him. I was thrilled for him. He was so happy.”

But neither Suzy nor her family knew that Dan had stopped taking his medication. Nor did they realize Dan was caught in a downward spiral he couldn’t reverse. He would die by suicide a week later. Suzy said she now knows that Dan must have felt strong enough to cease taking his pills, But once Dan stopped, he had no concept of the path he was on. Neither did she.

“I honestly didn’t understand his disease until after he died and I did research to answer some questions in my mind,” she said. “It’s been a real strong need for me to educate people about the signs. There are real dramatic signs people will show when they are off their medication and he was showing every one in the book. We just didn’t know.”

Immediately following Dan’s suicide, Suzy said she was filled with the “Whys?” all suicide survivors know so well. Although she has immersed herself in research, she is also at the point where she feels she can ask more questions about Dan’s death; questions she didn’t think were appropriate to ask until now.

It was at the funeral, she said, that she knew her life had changed. “I had this overwhelming feeling of compassion. It was this gift my brother had given me. He was telling me to be compassionate toward people. I wanted to hug everyone. I told myself when I felt that at the funeral, I would never let it leave me.”

And she’s found people, right down to the strangers sitting next to her on airplanes, to listen to her story. She also credits her family and Mark, her husband of nine years, for their help. “I’ve had an overwhelming amount of support so I’ve kept talking,” she said.

Then there’s the artwork. Suzy has a bachelor’s degree in graphic art; Dan was an artist as well. Suzy had purchased a painting from Dan two years ago, and she’s pleased that it’s in her possession.

“After his death, I dove into my artwork and I couldn’t stop,” she said. “Again, it was my way of dealing with it; I was doing something he loved. Art has always brought me so much happiness, so this was a connection to be close to him. He has just inspired me.”

But, most importantly, Suzy has begun to learn the hard lesson all suicide survivors must endure: to let grief run its course. “After the [Olympics] race, I was so upset,” she admitted, having thought she could change the world with a win that would have honored her brother. But through talking with her husband, she began to see what she could realistically do. “I realize now I can make a difference. Maybe it will affect some people. And that’s what is really important.”

She has plans to work with a sports psychologist about issues concerning her running and Dan’s suicide. But now that she’s able to see how she was hurting herself, she feels she’s ready to move on.

As only a survivor of suicide understands.

Related articles:
• Why Did This Happen?
• Adult Loss of a Sibling
• Planning a Memorial Service after a Suicide
• Creatively Coping With Grief
• When You Fear Someone May Take Their Life

Also by Michelle Linn-Gust:
• The Grief of Sibling Survivors

. Her first book, based on the suicide of her younger sister Denise, Do They Have Bad Days in Heaven? Surviving the Suicide Loss of a Sibling, inspired siblings around the world in their survival after a loved one’s suicide. Her first fiction novel, The Australian Pen Pal, was released as an ebook in April 2011. She is the President of the American Association of Suicidology and lives in Albuquerque, N.M. Read more about Michelle at www.michellelinngust.com or read Michelle's blog Coping with Loss & Change.

Alyse Kathryn Hipes is now a member of LegacyConnect
Tuesday
Welcome Them!