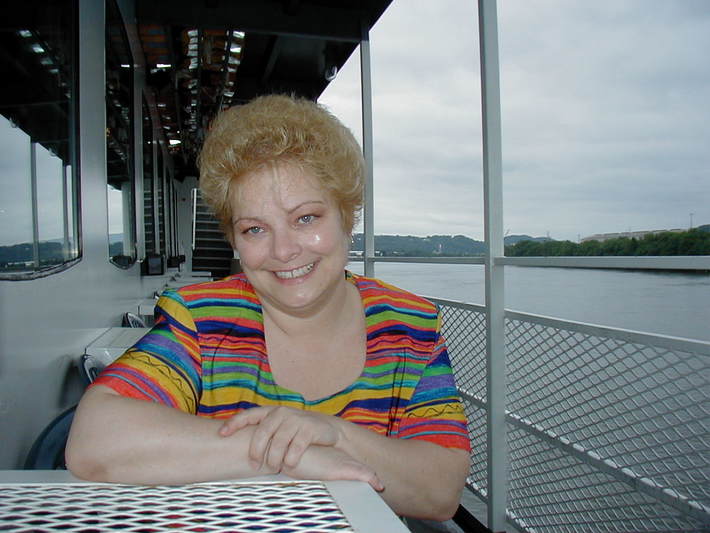 Ever wonder what a difference a day can make? What thoughts come to mind? Joy, hope, sorrow, fear? In my wildest dreams, I never thought it would include “caregiver.”

Gregory and I moved to the Atlanta, GA September 1998. Greg's nephew spoke of “jobs a plenty,” especially for artists. Upon arriving, Gregory immediately set out to secure a job in the graphics world. We were elated a week later when he returned from an interview announcing he was starting a new position October 5th. We were happy accomplishing our goal for moving to Georgia.

Friday October 2nd, Greg indicated he didn't feel right. Sunday morning he felt extremely fatigued and his legs felt like lead. Several times he fell down. He didn't know why. Sunday night he fell again; this time he couldn't get up on his own. I decided to take him to the emergency room. We struggled for two hours to get him off the floor, dressed, up a flight of stairs to the parking lot and in the car. When we arrived at the hospital, he could not get out of the car. It appeared he was experiencing paralysis. Thankfully two security men saw us struggling and came to assist.

While trying to make sense of all this information I thought, “Where do we go from here?” My thoughts lead to our respective jobs. How am I going to tell our loved ones, especially his mom? We had been together almost three years and always talked of traveling through life together. We were alone, 850 miles from both families, presented with a challenge which ultimately, was a true test of our devotion to one another. I prayed for strength for Greg and guidance for myself. I waited for Greg to wake up.

Several days passed; I was at the hospital 20 hours per day. Occasionally Greg would become conscious enough to recognize my presence, then immediately fade away. I came to cherish those moments. Thursday evening the Neurologist announced he wanted to give Greg medication to shrink swelling in the brain. He thought it may improve his condition. About 30 minutes after the medication was introduced into the IV, Greg woke up. Not just for a few fleeting moments; he was awake, coherent and he spoke. That was the very first moment I realized the extent of damage the stroke had done. I wept.

The stroke was a right brain injury, left side affected. I knew there would be physical impairments. What I never thought of, nor expected, were the cognitive impairments. In retrospect I should have known, a stroke is a brain injury.

“The lights are on, but no one is home.” When I looked into Greg's eyes, it was as if there were no active thought processes except for what was happening in that very moment. I needed to learn more about the effects of this type of stroke quickly. I spent every moment Greg was sleeping doing research. Sadly, if you don't know what to ask medical personnel, many times they don't volunteer information.

After a few weeks, Greg was moved to the rehabilitation floor. It was there I realized if you can't fend for yourself in a hospital, you better have someone there who will. I shudder at the thought of what could have become of Greg.

This is where I first encountered a social worker. I will never forget her exact words “You two aren't married, you have no obligation to him. Put him in a nursing home and move on with your life.” Yes, you read that correctly. Are you envisioning a vibrant, artistic, 39 year old man wasting away in a nursing home? Did those words anger you? They did me. I heard that little voice inside tell me; “That's not the way. You will not be forgiven.”

I started my response with “Look! Let me tell you something” and did not back down. She tried every rebuttal in the book to persuade me. By the time I was finished, she was so frustrated she finally said “Fine! But if he's back in here with any broken bones, I'm putting him in a nursing home.” That was just one of several encounters I had with “professionals” whom, in my opinion, were way off base in their prognosis of Greg's situation. Now don't misunderstand, for each negative encounter, there were many more resulting in a positive outcome.

It was a long six weeks on the rehabilitation floor. I knew Greg would be busy with therapists trying to recover. I started working four hours per day. Working was a nice diversion from what had already become routine in my life. Each day I arrived at the hospital at 12:30pm, stayed until midnight, ensuring Greg was receiving proper care and assisting where I could. From not being able to sustain consciousness, to the point he was at when he was discharged was a great improvement, however we still had a long, long way to go.

I was told the greatest improvements will be achieved within the first six months. With the proper therapy, the neuron pathways will grow around the injured part of the brain. Improvements after six months would be small and infrequent. I'm not a medical professional, but I'm not ignorant either. What that meant to me was therapy, therapy, therapy. Three times per week for, what turned out to be, six weeks. He was doing so good, but obviously needed a lot more work. Why stop his treatment? That's when I learned about insurance and the blanket limitations of treatment they impose upon patients. I would love to know who came up with the notion that all stroke victims get six weeks of outpatient physical therapy. Strokes affect each person differently. In Greg's case, it was very obvious he needed more therapy.

With the new year, came new challenges. I was on a mission. I was determined to make a small difference in Greg's life everyday. I was working about a mile from home. I came home on my lunch breaks and we walked to our mail box as a way of continued therapy. When I returned home in the evening, we worked on the exercises provided on the last day of therapy. When summer came, we went to the pool and walked in the water for a couple hours per day. We played memory games, did word search puzzles, and continued working toward him regaining strength and control of the left side of his body. In between, we went to never ending medical appointments for the severe health issues lupus brought him.

My supervisors grew weary of my personal needs. I decided it may be better if I worked a second shift job. I would then have mornings free to take Greg to his appointments. That plan worked 'almost' beautifully for four years. As Greg's health worsened, I was able to ensure he received proper medical attention. Over these years, among many other issues, lupus caused him to become legally deaf with degenerative nerve disease, severe lung issues requiring oxygen 24/7, kidney and heart disease. His own body's fighter cells don't know his vital organs actually belong there, so they are being attacked. Coupled with continued cognitive and memory issues, it became apparent Greg needed assistance with everyday needs.

I laugh at some of the mishaps that occurred while Greg was home alone; like the time he was going to wash the dishes. He started filling the sink with water, got distracted by the TV, sat down to watch TV and forgot the water was running. Because of his hearing impairment, he couldn't hear the water running. Oh yes. He flooded the apartment. It was so bad, the water seeped under the walls into adjacent rooms. Luckily we lived on the ground floor. I knew Greg would never be able to work in a structured environment again. I had to figure out a way to work from home.

“When one door closes, another opens.” Although we loved living in GA, we decided to move back to WI at our families urging. It was if my prayers were answered. In 2003 while searching for employment, I found an agency contracted to hire work at home call center personnel. Having a solid, twenty year, corporate career history - taking that work at home position opened up a whole new world for me.

Sometimes Greg becomes discouraged, considering himself a burden to me. I know he would love to provide for me “the way a man is supposed to” as he puts it. That just breaks my heart. What he doesn't understand is, I have cherished everyday of this, albeit, challenging adventure. He has never taken his frustrations out on me. He remains positive saying, “to be ornery won't improve my health, so why waste the energy.”

My heart breaks watching how hard he struggles each day with ordinary tasks; like breathing and walking. Over the years, we have lost everything financially several times. We have lost friends and family who knew Greg “before” and just can't stand to see him in the condition he's in now.

Greg's serious health issues take precedence in our lives. While Greg will never be 100%, I still look for and amazingly find small improvements. I continue to subtly challenge him to use his left side, help him remember daily tasks and ensure we are free from those mishaps of yesteryear.

We've been together almost thirteen years now. I fully realize as each day of his life passes, we are one day closer to his death. This dear, sweet, kind man will not live to a ripe old age. Knowing all this, doesn't and won't make his death any easier when the time comes. He is dearly loved and will be sorrowfully missed.

First, there are two paths in life; the point A to B path or the scenic route. We've chosen to live the scenic route. We are good to, and for, each other. Together we live and endure the struggle, supporting one another, making this an exciting journey.