Justin was my heart.

Justin is the youngest of my three sons and had just turned 28. He was my baby and always very close to me. Justin was killed on July 12, 2009 at 5 am in a car accident. His car left the expressway on a curve and ended up in a stand of trees next to an expressway ramp near our small town. Three days and 12 hours later I found my son's wrecked car and him inside it. I had a very bad feeling from the time I knew he was missing as he always kept close contact with his family. After our family… Continue

Christmas for my husbands family

Im lost and I just dont know what to do. I have been apart of Jimmies family since I was 14 years old. So all his sisters kids know me as their aunt and I loved them as my own. We have always done all holidays together but this year is different. Everyone blames me for his death since he took his own life, I guess they just need someone to blame. His sister isnt talking to me. I sent her a letter and she put return to sender and mailed it back from what Jimmies mom says. Now I havent received… Continue

Reflections Of A Beautiful Soul 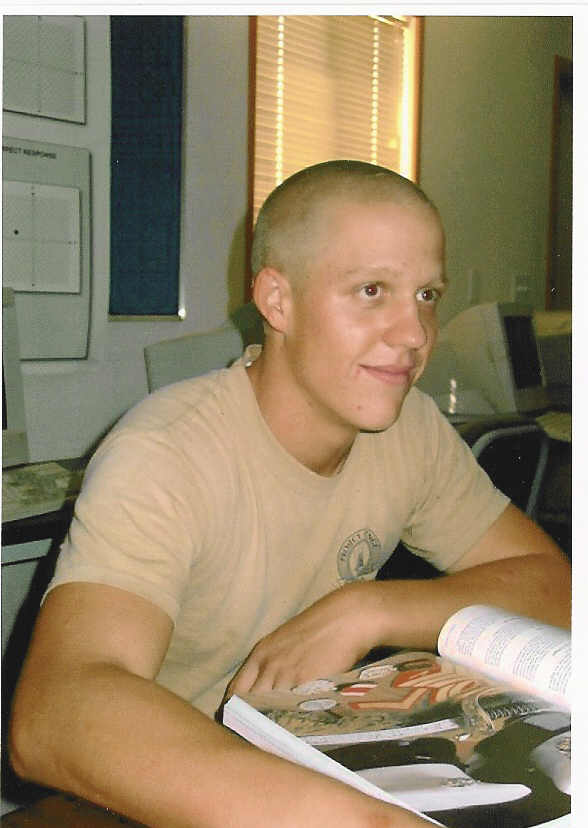 March 4th 2005, the day my life will have changed forever. It was like any other day, or so I thought…until I received the news about my son, Ryan. having been killed in a single vehicle rollover accident on I-10 near Tonopah AZ. I have been on an emotional roller coaster ride ever since. Up one day and down the next…Realizing I would never get to hear his voice, his laugh; oh could he laugh. Never receiving another phone call saying, wuz up mom, or… Continue

how to help my husband with the loss of his son

My husband has lost his son in October. I need some help finding help for him. With the holidays approaching it is getting more difficult. I worry about losing him to if I don't find a group where there are people who are experiencing the same situtation.

WE JUST WANT TO SEND A MESSAGE SOME HOW, THAT WE MISS AND LOVE YOU SO MUCH AND THAT NO ONE OR NOTHING CAN TAKE THE HURT AWAY.

I HAVE PICS AND NOTES ON OUR MYSPACE AND FACEBOOK ACCOUNTS. I HAVE READ THE MESSAGES FROM YOUR FRIENDS AND FAMILY AND I SEE HOW SOME HAVE MOVED ON AND OTHERS WILL NEVER EVER FORGET YOU.

I HOPE WE GET THRU THANKSGIVING. THIS WILL BE THE SECOND ONE WITHOUT YOU AND IT IS SO HARD BECAUSE THE FIRST ONE THAT WAS AT YOUR BROTHERS HOUSE THAT HE FINALLY GOT… Continue

How do I express my profound sadness and disappointment to my brother who refused to attend my/his sister's funeral?

My sister, best friend and "surrogate mother" (my Mom died when I was 11) died on October 14. She had been living with me for nine months during her illness and we had bonded even further during that time. She was a wonderful, loving and caring mother, wife and sister.

One of my brothers and his family did not attend the funeral, nor did they extend any support or condolences to the rest of the family who were experiencing deep grief and sorrow. I can only attribute my brother's… Continue

I lost my son Michael James Heyworth seven years ago. He was taken in a horrible car accident. He was not drivng, a young lady was. They say the pain and saddness heals in time, but not for me. I don;t think that pain and saddness will ever go away for me. I* think of how much Mike has missed out on, getting married, having children. He was only 31 years old. He has missed out on so much with his neices and nephew. I will miss him forever. I kept alot of his things in a second bedroom in my… Continue

My brother was 46 when he jumped from the roof of the Condo building where he was the on site maintenance man. It was Vetern's Day 2006, two days after our mom's bithday. I still miss him. He was a very talented pianist. He could play by ear and sang like an Angel. He will always be my angel! His daughter looks like her mother, but she has her Daddy's personality. I found this website and let her know about it. She thanked me, because she says she feels alone in her sadness. I told her she wll… Continue

Learning to say no!

I'm the executor for my aunt and grandmother. Everyone has a request and lately I've been feeling very tired. Today I said no that I would not respond to a request. It bothered me at first, but I'm really glad that I refused to be imposed on today.

As I sit here reading tears are falling down my face, I can't control them they fall freely. One minute I try to pretend my daughter is still here, but the next moment I remember she is up in heaven. I pray to God for help, the pain is so intense I feel like I am torn in two
Tammy
Ashleigh's mom forever and ever

How To Resolve The Guilt of a Suicide Survivor

No one can know the depth of despair to which a person may sink upon contemplation of suicide. Possibly, the black hole in which one finds him/herself gets deeper and darker as the days go by. Soon, even the smallest sliver of light is blocked from view. And then, instead of being frightening, the darkness becomes comforting and safe. It cradles and protects the person from all outside forces – from life and all the decisions to be made, both large and small. Eternal sleep and “supposed”… Continue

A Grief Out of Season

We are not prepared to lose a friend and colleague in the span of a weekend. We are not prepared to have death come to us so suddenly, unexpectedly, almost assaultively. Work is the known world—the place for demonstrating our strength and competence, our viability to exact predictable results. We are broadsided by the news of sudden, violent, and senseless death. And it is as if, for a moment, time stands still, as we take in the information that a person of youth and promise, our friend and… Continue

Tender Mercies; remembering both your smiles...

My beautiful grand- baby Megan' was diagnosed with neroblastoma, stage4 at 2 years old. I, whom my children look up to as i did my parents" as an invincible human being... When they said the word cancer; i was cut off at the knees. And, in thus' my family and i were drawn in to the world of suffering 'angels'... Our saying to her, was, fight maggie, fight! And, fight she did; as brave as any solider in the wars of today. All the precious children did... For 18mo. Megan fought until a lung… Continue

My son Jeremy was killed on June 7, 2008 by a big rig truck driver. Jeremy was on a motorcycle. He had just been at a big motorcycle stunt show and was on his way home for his oldest daughters 13th birthday party. He had called me 10 minutes before the accident so excited because he had just won me and his dad tickets to the Nascar races the next weekend (he knew we watched them every weekend and had gone a couple times) His last words to me were "Mom I gotta go, we're getting ready to leave, I… Continue

Dad I miss you so and want the family to grow together, not fall apart. Please guide us thru. I am happy you are at peace and taking care of things we on earth cannot understand." Please Lord take the wheel"

My mom passed a few weeks ago.
I spent 3 weeks packing up her belongings. My siblings came in and took anything of practical value and left the meaningful, sentimental stuff. I made little pkgs for ppl who really cared for mom. Her glasses went to Lighthouse for the Blind, her hearing Aids went to Disabled Vets and her clothes and shoes went to a Battered Women's Shelter.
Now I am back home. And no matter how much I know I did the best I could and how many ppl tell me how beaut the… Continue

I lost my husband April 20, 2009 due to a subdural hematoma from a fall. He had been suffering from chronic back pain and kidney failure but this fall was a total shocker. We would have been married for 30 years in August.

Taking Care of Yourself

In order to stay as balanced as possible when grief evokes intense and variable emotional states, we must attend to body, mind and spirit. Use gentle, peaceful means, and be patient with your self and your process.

BODY
Make gentle, slow changes that you can hold to the rest of your life.

Nutrition: Avoid the standard American diet of too much sugar, fat, salt, protein, and processed foods, which include most of the above, plus toxic chemicals. Move towards whole… Continue