On Friday, December 30, for no specific reason, I drove to the cemetery where both my dad and my sister are buried. As I began to drive away, I noticed that the song playing on the “'80s on 8” station was called “Fly High Michelle.” I thought I knew every song from the 1980s, but this one from a band called Enuff Z’Nuff was new to me. I was baffled to see my name on the song display, and it took a few minutes for me to register what was happening. I often joke that I wish my deceased family members would send me direct messages and here was one at the cemetery. 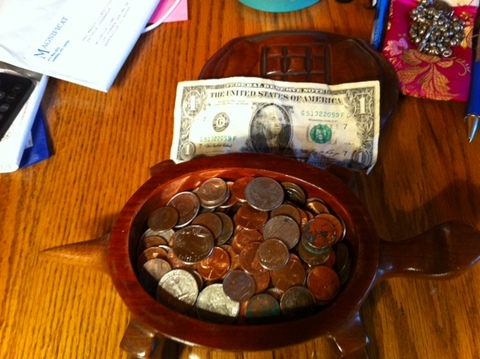 New Year’s Eve marks the day when I tally the coins I have found for the year, the coins I view as signs from my dad. In each of the past two years I found about $6.00 per year but this year was $13.33 including the dollar I found one morning last week frozen to the street. The previous night had been difficult and I couldn’t help but laugh when I picked up the dollar. It was a clear sign from my dad that, despite all the disappointments I’m enduring now, all will be great. He didn’t just send a quarter (I had also found one of those earlier that morning); his message was loud and clear with a paper bill.

My dad always bought lottery tickets. His car was constantly littered with them and when he went out of town, someone got the job of going to the White Hen Pantry around the corner to buy his weekly ticket. As this was my first New Year’s in my hometown since before his death, I drove over to the old White Hen Pantry (not a White Hen anymore) with all my coins and purchased several Powerball tickets. The lady behind the counter patiently watched me count out my change; the other customers in the store peered over to see what I pulled out of my Ziploc bags.

Although I would love to win the jackpot, I know that over the past few days I already have. Once again, thanks for the messages, Dad. I know you’re still with me.