Am I grieving for Whitney Houston? 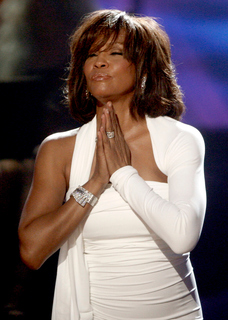 Is it possible to grieve for someone you don’t know? When they announced Whitney Houston’s death, I felt a deep sense of loss. I never saw or met Houston but I loved her music. Her songs were the soundtrack to many milestones in my life and I felt so sad at the tragic loss of so much talent at far too young an age.

As I watched a recap of Houston’s performances in the days following her death, and then some of the coverage of her funeral, I was struck by how many lives she touched by both her talent and her death. Were we bereaved at the silence of such a beautiful voice?

This isn’t the first time I’ve experienced a sense of loss following the death of someone famous. I remember experiencing shock and disbelief at the news of Tim Russert’s sudden death; and a real sadness when Peter Jennings died. In both cases, it felt as if I’d lost a friend. After all, I let these newscasters into my home every day when I watched the news. I was influenced by their reporting and in doing so, their opinions and observances impacted my life. I really missed them when they were gone.

So I ponder, am I grieving? How does feeling sad and a sense of loss differ from the grief I might feel while mourning the death of someone I know? I think the answer is in the word “mourn.” I can feel a terrible sadness, a sharp sense of loss, and I can truly miss a celebrity or high profile individual. But I’m not really mourning. Their death doesn’t impact my daily activities and the sadness doesn’t linger.

I bounced back quickly after Jennings' and Russert’s deaths. I continued to watch their newscasts and got used to the new anchors. When I saw an exhibit at the Newseum that paid homage to Russert, I truly enjoyed revisiting his legacy. I feel a twinge of sadness listening to Houston but I know that one day soon, those songs that are the soundtrack of my life will once again conjure happy memories of my milestones.

What I will remember from these three deaths is the lasting influence these individuals had on my life. What a gift they had to impact me and so many others in such positive ways. That’s something worth remembering.

Top Image: In this Nov. 22, 2009, file photo, singer Whitney Houston receives the International Artist Award onstage at the 37th Annual American Music Awards in Los Angeles. Houston, who reigned as pop music's queen until her majestic voice and regal image were ravaged by drug use, has died, Saturday, Feb. 11, 2012. She was 48. (AP Photo/Matt Sayles, File)

The reason why we all feel a sense of lost or sadness with death in the case of someone we know or even admire- is that it is not normal.  We were created to live forever.  However, due to sin and man's choice in the beginning to disobey God -  we are suffering the consequences  of disobediences.  (Genesis 3:24)

I believe we all felt a sense of lost at the death of Whitney Houston.  I just thought to myself such a beautiful person with a gift God gave her in being able to sing and bring such beautiful sounding lyrics to so many people.  It really amazes me when I actually sit back and see the various gifts we all possess in one way or another.   We all have an impact on those that surrounds us each and everyday.  Beautiful talents - the ability to dance, sing, design, paint, build and create - they are all very special gifts given to us by God - so when one die - it is truly missed.  Their voice, touch, influence, words, creation, melody, and calm.  We miss it all!!!  That is why - while we are alive we should tell all those in our heart how much we love them and never let the sun sit with us in a provoke state - as we do not know what tomorrow may bring.

So, your sadness is very much understood.   So, the thoughts of Whitney Houston will linger on and the tone of her voice and melody will never be forgotten.   We will all miss the melody she created and joy her music placed in so many people hearts.