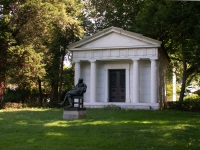 My dictionary defines a mausoleum as a large, stately building that houses above-ground tombs. The word derives from the Greek for Mausolus, king of Caria, who died circa 353 B.C. And it's true that many mausoleums are very grand in size, big enough to walk into for both privacy and shelter from the elements and to accommodate the crypts of a large family. Marble or granite is common material. The most lavish structures may feature budgetbusters like a chapel, paintings, stained-glass windows and bronze doors. The thicker the walls, the higher the cost.

However, an outdoor (or "garden") version, which does not include a covered area, is considerably less expensive, in part because there are no heating costs. An above-ground stand-alone crypt can cost as little as $1,000, depending on size, details, land prices and geographical location. Additional fees may also apply.

Another option is a community mausoleum, which is likely to offer amenities like a chapel – plus separate crypts for large numbers of people (thousands in some cases) who may be strangers to each other. The community concept, less costly than a private mausoleum (although pricier than simple burial and gravestone), began in Spain and France – and caught on in the United States about 150 years ago. Today, improved construction techniques have pared costs to as low as $3,000 for a crypt, plus opening, closing and other charges. In addition, interest in columbaria (which offer niches for cremation urns) in mausoleums has grown. In 2012, 43.2 percent of deaths involved cremation versus only 26.17 percent in 2000, according to the Cremation Association of North America. Niches can start at a few hundred dollars. More information on mausoleum costs is available at www.personalfinance.costhelper.com . Or just type "mausoleum prices" in your search engine. Photos of various mausoleum styles are available online, as well.

Before making a decision, do consider which cemetery you want. Some cemeteries don't permit mausoleums. Arlington National Cemetery has only two – one for Brig. Gen. Thomas Crook Sullivan and his family and the other for Lt. Gen. Nelson Appleton Miles.