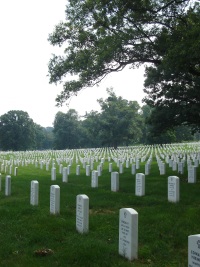 Q. I heard that an acquaintance of mine, who just died, is going to be buried in Arlington National Cemetery. Is that possible? He was just an ordinary guy. I thought you had to be a military hero or someone important in the government. Also, how much does it cost?

We tend to assume that burial at Arlington National Cemetery is only for heroes and the high and mighty. After all, it’s hard to imagine a greater honor. Yet many other people are actually candidates for Arlington, as well.

Interment of casketed or cremated remains is possible at no cost for those who are eligible. The latter include most active duty members of the Armed Forces, retired members, former members who were honorably discharged from the last active duty, and winners of the Medal of Honor, Purple Heart, Silver Star or certain other medals. Prisoners of war who served honorably and died on or after Nov. 30, 1993, can be interred at Arlington, too.

The eligible also include elected officials of the U.S. government; the chief justice and associate justices of the U.S. Supreme Court; and certain other public servants. The spouses and minor children of anyone eligible for Arlington are entitled to burial there, as well. There is no charge for any services at Arlington unless the next of kin want a private headstone or vault rather than what the government provides. Military honors can be provided for enlisted Armed Forces personnel, officers and their dependents.

There is a catch, however. Roughly 7,000 people are buried at Arlington every year. It can take from several weeks to several months to schedule funeral services, depending on the volume at the time, chapel availability, special requests by families and other factors. Not every family is willing to wait. In one recent case, next of kin were told it would take three or four weeks for the funeral to take place – and possibly longer. The bereaved ultimately opted for a funeral at a time of their choice and found a military cemetery a few hours from their home. The deceased was buried there with military honors. His widow will be buried there as well.