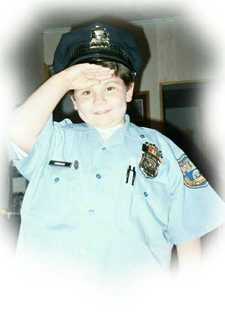 Tasha and Jun have been family for over ten years.  Jun, short for Junior and because I refuse to spell his nick-name with an "e", was my partner in the 12th District when I was still in uniform.  For nearly four years, we save each other's butts on more than one occasion.  Jun is Alaina's God-Father; Tasha is Charlotte's God-Mother.  Almost every Christmas, after presents are opened, we would have breakfast at their home.  From the moment the news of Timmy's death was making its way through the police network, and the news media, they both were there pulling up almost at the same time at the hospital in separate cars.

The Fraternal Order of Police arranged for cooked meals to be sent to the house during the week as we prepared for the funeral.  I sat in the kitchen, a mug of coffee in front of me; my cigarettes and lighter set next to it.  Tasha came into the kitchen.

"Oh no mister," Tasha said trying, in a failed attempt, to sound like a drill sergeant.  "You have to keep up your strength and I am saying you're going to eat."

I looked past her at Jun.  He shrugged his shoulders in a "What do you want me to do?" motion.

Tasha marched into the living room where the small buffet was set up and returned with a plate of food; turkey breast, mashed potatoes, string beans, and stuffing piled on it.  She took a napkin and stuffed it in my shirt collar, then pivoted and began to cut the turkey into small morsels.

"Now take a bite," she said holding the forkful of turkey breast.

I looked at her and knew it was a losing battle.  After a few forkful bites of turkey being fed to me like an infant, I finally took the fork.

"If I eat this, will you leave me alone?"

For that week, Jun chauffeured me around taking me from one meeting to the next.  He wasn't there to play chauffeur as much as he was there to protect me, even if it meant protecting me from me.  He knew I wasn't suicidal.  But he knew me.  He knew all my tells from all the arrests and investigations we had made together.  He was there as my friend, my partner.  He was there as my brother.  Somehow or another, he was detailed to be my shadow ordered to stop me if looked like I were to do something stupid.  I know I wore his patients thin.  But if he was wearing the shoes I now wore, I would do the same for him.

Dee m is now a member of LegacyConnect
19 hours ago
Welcome Them!