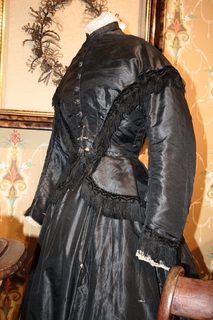 The fashion shows recently rolled out in New York, London and Milan reminded me of a fashion show of an entirely different sort I attended last year in Montana. It was during a week of seminars and workshops on aging issues, and I was invited to present ObitKit: A Guide to Celebrating Your Life, which I created to help people chronicle their life stories and end-of-life wishes.

A fashionista from New York actually did a session on how to dress for your own funeral! Of course it was tongue-in-cheek and didn’t really offer practical ideas for that final trip, but it did spur conversation on that topic: What’s my favorite outfit? What do I look best in? Could I still get into that designer dress from 10 years ago I’d like to “travel” in?

It might sound odd, but people do think about this.

In a 2011 interview in The New York Times Magazine, the philosopher-professor-political activist was asked by writer Andrew Goldman:

“What’s with the black suit, white shirt, black tie outfit you always wear? Do you have anything else in your closet?”

West: “I’ve got four black suits that I circulate, and they are my cemetery clothes – my uniform that keeps me ready for battle.”

West: “It’s ready to die, brother. If I drop dead, I am coffin ready. I got my tie, my white shirt, everything. Just fix my Afro nice in the coffin.”

Ria Pell, an eccentric restaurateur in Atlanta, was quoted in her obituary with her last wishes, saying: “I would like to be buried in my best overalls, white dress shirt, bow tie, plaid pork pie hat and my favorite boots.”

Even a funeral home encouraging all of us to plan ahead has gotten into the act in a recent advertisement. It featured an elderly woman delivering this message: "You've always said you wouldn't be caught dead in that dress. You'd better tell them now."

Increasingly, obituaries mention people’s interest in clothes and their particular sense of style. Here are some recent examples:

Travis requested that there be no black at his funeral. He was known for his vibrance which he expressed through his attire. To honor his request, please dress with the pizzazz that you know he would appreciate.

Ruth danced like a teenager long after she was one and never met a Chanel pocketbook she didn't like.

… Johnston and her husband were avid square dancers – so much so that each wanted to be buried in costume.

A man of selective indulgences, Tim loved his Moped, his Jaguar and full closet of fine clothes.

He loved playing tennis, sitting in the sun, reading and fresh French bread. He was a sharp dresser … but was always barefoot when he could be.

A tiny, fragile-looking woman who favored big jewelry, fishnet stockings and minidresses till she was well into her 80s, she was a regular guest at society soirees and appeared often on television.

His signature everyday look was … a plain pocketed T-shirt designed by the fashion house Fruit of the Loom, his black label elastic-waist shorts … and a pair of old school Wallabees.

When we buried my father’s ashes in a small cemetery in Connecticut, we made sure to include a few things that were his trademarks: a Hershey bar, a bottle of scotch, some tennis balls and – his own statement of style – a favorite bow tie.

evn saed i wud luv a mutlu clord boz i wud