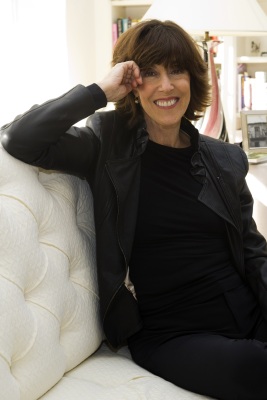 So many of us could relate to her writings, musings, movies and books – not to mention a failed marriage or botched film that made her really human to her fans. When I was starting my own writing career in Washington, D.C. in the early 1970s, she was writing essays for Esquire that were always pithy, self-effacing and spot on. If you never read A Few Words about Breasts, check it out.

Our generation of women could really relate to her and vice versa. “I was so in tune with everything she talked about,” one of my friends emailed. She got us and we got her. Maybe it’s because she took her writer-mother’s advice – “Everything is copy” – to heart and assimilated dialogue she heard or spoke into her books and movies.

From her we learned how to live, how to laugh (especially at ourselves), and, now maybe, even how to die: Still full of life.

Over the past several years, there was no public wailing about her demise from leukemia; no gaunt, haunting pictures of her in Peoplemagazine; no wallowing in premature tributes of appreciation and adoration that never seem to strike the right note. There was also no chance to get used to the idea she was bowing out. If you’re Nora Ephron you can’t exactly be a private person, but she managed to write her final script with personal grace, privacy and dignity.

With only the closest friends and family in the know, she just — seemingly suddenly — died. Friends have said she was optimistic she could beat the leukemia but it was pneumonia that finally stilled her voice. The beautifully written obituary from Charles McGrath in The New York Times this morning ended with excerpts of two lists she had included in her last book, I Remember Nothing.

Things she would not miss:

The sound of a vacuum cleaner

Among the things she would miss:

Coming over the bridge to Manhattan

It struck me how much that said about Nora just to have those few words in her obit. I wondered what my list would be and then wondered what my friends’ lists would say about them if such lists were included in death notices. I sent out an email to various friends, mostly women and a few men, and asked for spontaneous responses. Some answers were predictable – yes, kids, grandkids, husbands, coffee in the morning, wine at night and chocolate will be missed – but the "Won't Miss" category included a wide range of responses, some very telling (Rush Limbaugh and other conservative talking heads came up a lot). I am sharing each person’s Won’t Miss and Will Miss lists as they form a more complete picture of the person. See what you think.

My own list includes many items listed above but I will boil it down to this and hope some of them actually make it into my obit:

People who yak on cellphones in restaurants and grocery stores, rampant obesity, taxes, old age, stupid ads on TV (yikes, sounds like old age already has a hold on me!)

This exercise taught me things about some of my friends I didn’t know. Fruit overrated? Really? And I didn’t know talking heads struck such a nerve with so many of them! Some also sent back specific references to things they read or saw or loved from Nora Ephron. “Thank you for the exercise of making me think about it,” said one. “I will be more appreciative as I see things all around me that I would miss. As I saw the tributes to Nora (first name basis) yesterday I had the sense of a truly great spirit passing from us.”

And another wrote, “Ever since HeartburnI think about eating mashed potatoes in the bed when I am feeling sorry for myself! Haven’t actually done it, but I want to.” Might be a nice way to pay tribute to a woman of wit and wisdom who will be missed.

Susie, Susie, Susie...we have our own group of "Harpies" and you're our Nora!  Great blog post!  Gini

Carrie Daniels is now a member of LegacyConnect
17 hours ago
Welcome Them!