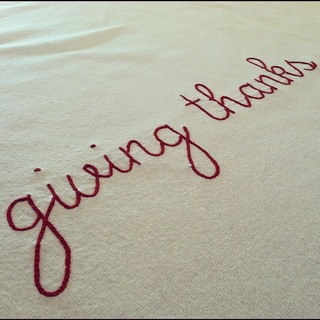 Over the past year, there have been an inordinate number of people on my radar – neither family nor very close friends, but certainly in my life – who will not be at their Thanksgiving tables this year. I suspect that’s true of many others. The empty chairs serve as reminders of the beloved souls – young, old, healthy, infirm – whom friends and family will sorely miss. Let’s hope that along with the grief there will be time spent telling stories, paying tribute and celebrating their lives to keep their spirits and memories ongoing.

As obituaries become more and more personal, including the special characteristics and quirks that make each of us unique, it strikes me that they also are becoming a way of saying, “Thank you for the gifts you left us … and for the memories we will always hold close.”

One recent obituary comes to mind: “Nobody was funnier, and the stories and memories of his larger-than-life personality and clever wit will live on. …” Could there possibly be a better legacy than bringing mirth and joy to this world?

As I write or read through and collect memorable passages from obituaries, so much gratitude comes through in the simple ways people are remembered by their families. Here are some to share:

Thank you for sharing your joy…

She could often be spotted in the village shopping, picking up a Patsy’s pizza or sipping a frozen margarita with her husband during Sunday brunch. …She always looked forward to her annual 3B reunion trip with college roommates, a tradition that lasted 30 years. She enjoyed socializing, and “Build Me Up, Buttercup” never failed to get her up to dance. – Christine Clark, 54

He was a gifted writer and graphic designer, woodworker, wood carver, metalworker and outdoorsman. He took as much pride in adeptly handling a chain saw and driving a tractor while wearing bib overalls as he did in emceeing formal events dressed in a tuxedo. John, 75, also was quoted in the obituary as saying, “It’s been said that life is a journey and most of my life has been a magic carpet ride. …”

In his spare time he tied flies for the fly fishing community and for himself, which he tested on the waters of the Chattahoochee River in the catch-and-release waters he loved. A tradition every year for many years was a camping trip to Sapelo Island that included three generations of fellow nature lovers and the same core group of friends who loved his camp-kitchen prowess. – Mike, 63

Thank you for being a wonderful parent…

He led an exemplary life as an artist, a father and a grandfather. His sons insist that he was “the best effing father of all time.” – Ivan, 68

Her mother died of Bright’s disease when she was nine. Just before her death, her mother told her to “always be a good girl and take care of your little brother.” Her brother was the apple of her eye and, for many years, she talked on the phone with him every Sunday (right after 60 Minutes). – Penny, 93

His children – who knew him to be a good listener – did not escape his analytic eye, either, and his role as a counseling physician sometimes crept into his home life. His step-daughters often referred to him as doctor, and when he told a son, “You can change,” he did. – Kingsley, 79

She delighted in spending time with her husband and grandchildren at the lake, where her newly planted daylilies and the sunsets she enjoyed will be reminders of her family’s enduring love for her. – Jenny, 65

Thank you for being a good boss…

He was known for empowering employees, creating opportunities to achieve and shine, and he enjoyed engaging with hospital staffers whether serving meals in the cafeteria, helping out in surgical supply or cleaning hospital rooms. He relished developing leaders in his organizations and started the Women’s Leadership Alliance to inspire more women to move into leadership positions. – Tim, 60

Thank you for community service…

He designed and supervised building a school in Croix des Bouquets, Haiti, using shipping containers for the construction. He was honored at the school’s ribbon cutting in March. The 53 elementary school-age children surprised him by singing the Haiti national anthem in French and the American national anthem in English. – Richard

Thank you for making holidays special…

Christmas was a favorite time for her as she made each holiday magical by decorating the family home with theme trees including a white tree with Chinese fans, a bird-and-fruit tree, a mouse tree and … her Christmas cards were always decorated with images of mice. – Ann, 84

Her greatest pleasure in life was to gather her family together and mark the celebration of holidays such as Fourth of July, Thanksgiving and Christmas. At every gathering she handed out sheet music to her favorite hymns and patriotic songs. Everyone was required to sing. – Jane, 84

Those who knew Martha could tell you how perfectly she embodied the essence of a true Southern woman. …She had a lifelong love of cooking and would prepare a true feast of scrumptious food even for the smallest of gatherings, always worrying that there wouldn’t be enough. Those lucky enough to enjoy one of her unbelievable holiday spreads would agree they’re certainly eating well in heaven now! – Martha, 81

His enthusiasm for Christmas was legendary among all who knew him. – James, 92

Thank you for being you…

She could walk into a room and make friends with her smile, especially if she was wearing her witches set of zombie green and yellow teeth. – Hoodie, 63

She was a lifelong student and loved nothing more than to climb into bed with the latest tome on the kings and queens of England whom she could recite to you if asked, from Alfred to Elizabeth II. – Lisa, 62

A dyed-in-the-wool University of Georgia fan, she had a bumper sticker on her car which she drove into her 90s that read, “Damn Right, I’m a Dawg!” She used a walker she named Herschel. – Caroline, 99

He excelled at woodworking and home-improvement projects, and his legacy of porches, decks, fences and pathways will be with us always. – Glenn, 66

Mark was a Renaissance man who especially enjoyed reading any historical book he could get his hands on, most recently Herodotus. He would speak with passion on topics ranging from dirty politics to fast cars to technology and to his favorite birds visiting his feeders. He waged a continual war with the squirrels, who would eat all the seed. – John, 62

Last spring, only months before turning 90, she auditioned for a Senior Idol show in Fort Lauderdale. Her son selected some of her show gowns from the closet, had them altered, arranged for nail and hair appointments and turned her loose. She was one of 12 selected from 150 senior citizens to perform at the Parker Playhouse and was a runner-up for second place. It was her final performance. – Ruth, 89

Thank you for taking us places…

Travel has been a favorite family pursuit with him at the helm, enjoying the planning as much as the adventure. … Among the places he explored were the Baltic, Bhutan, Turkey, Machu Picchu, Hong Kong, Thailand, Brazil and Europe. To celebrate the 40th birthdays of his son and son-in-law, he took the young men on a golf trip to Pebble Beach and the Cyprus Point Club. … – Skip, 67

After retiring from the insurance business, he and Beverly spent six years exploring the Caribbean on their 41-foot sailboat, enjoying his passion for the ocean, scuba and free diving and spear fishing. – Charles, 80

He favored the “scenic route” even if it took longer or he got lost. – English, 74

Now six years is a long time for a young woman to be sick, but be assured that some of the happiest moments of our lives came during the period from living life in ways that we would not have done had she been in perfect health. We traveled and laughed and loved and had fun and enjoyed each other as a family in ways which will provide enduring comfort long after the pain of losing her has faded. And the intimacy that comes to a couple from care giving during illness is also a rare gift, as it turns out. – Christine, 39

For families and friends who will enjoy an intact holiday with no newly missing faces this year, it’s always a good time to build on making new memories and appreciating the time together. As a Native American saying goes, “Give thanks for unknown blessings already on their way.”