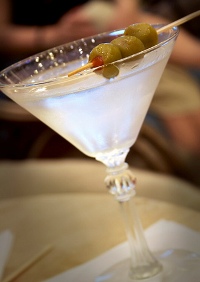 My dad died 14 years ago, on my brother’s June birthday. My friend Jane’s father died on her June birthday. Not surprisingly, when Father’s Day comes, it underscores the shocking and ill-timed departures of those guys we loved so much.

Even though at first we couldn’t really talk about our emotions, Jane and I have learned to share them just about every year since 1997 at our annual Dead Dads Dinner. Each May, when we know we’re heading into the blues that come with those anniversaries, we hit them head on with a tried-and-true Southern ritual of dealing with sadness: Let’s eat!

This gives us the opportunity each summer to celebrate the memories of two beloved men with a good martini and the best steak Atlanta has to offer at Bone's steakhouse.

Because of Jane’s friendship with the owners, Susan DeRose and her partner Richard Lewis, we got the royal treatment the night we launched the Dead Dads Dinner. The wait staff – always consummate professionals – knew that we were celebrating, or, rather, burying our grief in a good stiff drink – and could not have been more attentive or caring. When they delivered our first drink in individual silver cocktail shakers with the restaurant name engraved on one side and each of our dad’s initials on the other, well, of course, we lost it.

Since that first memorable dinner, we’ve both lost other family members and friends, and we toast them, too. We have come to realize the value in celebrating someone who’s gone and encourage others to do that, too.

I had written my share of obituaries as a young reporter at Newsday on Long Island, but not until my dad died suddenly, in the middle of the night on June 28, 1996, was I faced with writing from the heart.

At 4 a.m., with no resources to pull from other than the heartbreaking calls to my sister and brother, the end result was underreported and overwritten. Oh, of course, we knew the basics but had little time to make sure we had dates and titles right, much less to try to due justice to his colorful life in black and white print. I never needed an editor more!

Since then, I’ve had a hand in dozens of obituaries – as writer, editor, researcher, friend and family member – and know the value of having something to refer to, whether a list of achievements and attributes or thoughts that might be spun into a meaningful eulogy.

When my father died, we scattered some ashes off his beloved beach in Ponte Vedra, Fla. and read the following passage:

I am standing on the seashore. A ship appears and spreads her white sails to the morning breeze and starts for the ocean.

She is an object of beauty and I stand watching her till at last she fades away on the horizon and someone at my side quietly says, “She is gone.”

Gone where? Gone from my vision, that is all; she is just as large as when I saw her last and just as able to bear her load of living freight to its destination.

The diminished size and the total loss of sight is in me, not in her; and just as the moment when someone at my side says, “She is gone,” there are others who are watching her coming and other voices take up a joyful shout, “Here she comes!”

The warm welcome portrayed in this passage sustains my siblings and my self, each year as we face this tough month of celebrating dads – loving the ones here and missing so much the ones who are gone.

Comment by nina morzenti on June 22, 2011 at 6:49pm
I spend all of my parents Special Days in observence... and "all" holds more than one might think at first glance. On Father's Day 2011 I observed my mother and step-dad's (Roy) 50th Wedding Anniversary, even tho they only had 30 years together. It was more than enough for me to continue remembering their 1961 wedding. I was 17 and went off to UMass that Sept. I lived only 2 months with Mother&Roy. He was a gem. He died at 91 in 1991. Roy spent 20 years caring for his first wife, Rose, who died from her long time cancer 2 days after her 50th birthday and a week after their daughter, Mary was married. Roy&Rose knew mother since her divorce from my Dad 15 years before. In his grief Roy began to visit mother and they married and built a life around many mutual interests but not without little irritations. It's Mother's 3rd Wedding Anniversary.
My dad, John, was mother's 2nd husband of 10 years. I observed their 50th Anniversary on May 7, 1987 and will observe their 75th on May 7, 2012. Dad died at 69 in 1975. As the father of five I include him in my Father's Day observances.

Mother's 1st Wedding was on her young husband, Henry's 20th birthday on Aug 20, 1929. Their 50th Anniversary was in 1969... before I observed these days. But in 1994 I observed their 75th. My half-brother from that marriage drowned when he was 25 in 1956 when I was 12. He gave me a silver dollar for each all A Report card in my 5th, 6th and 7th grades between his return from the Korean War and his death on the last day of my 7th grade year. I observe Hank's birthday, death day and on Father's Day as the father of 3 children who don't remember him.
I do this alone because my own 2 brothers have 'mixed-feelings' of resentment about our parents... particularly mother. I had a few 'feelings' while they were alive but now only love for all of them... especially Roy who as the loving husband of two women til death parted them, demonstrated the meaning of being a 'wonderful father' to the children involved. Recently a life long friend of mine said of her son, who left his wife of 15 years with their 3 children to marry another with 2 children, that he is a "wonderful father". I don't think so. My experience says a wonderful father is first and foremost a wonderful husband til death parts. Nonetheless I do include the fathers in my mother's life on Father's Day but the "wonderful" one is the example of a loving husband.
I'd love to observe with my various siblings and their children but they aren't inclined. Perhaps a group who share similar feelings is a good idea. Thanks for the idea, Nina Morzenti@ yahoo.com

Comment by Robbie Miller Kaplan on June 15, 2010 at 6:32pm
This is really beautiful Susan. I have enjoyed reading all your posts. If you'd like to chat sometime, my contact information is on http://www.wordsthatcomfort.com.