Hats off to Mickey Easterling for Her Flamboyant Funeral 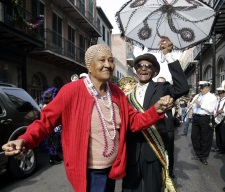 Clothes are often mentioned in obituaries – as in “clothes horse,” “favorite dress,” “designed and sewed beautifully,” “fashion driven,” etc. – but rarely does the word “hat” appear in the very first sentence.

The Nola.com/The Times-Picayune obit for a patron and party-giver was topped off like this: “Mickey Easterling, 83, a New Orleans socialite known as much for her grand lifestyle and outlandish hats as for her civic, cultural and political activism, died Monday at her Lakefront home.”

But it was only in the very end of the tribute that readers learned Easterling would appear at her own funeral in late April dressed to the nines including a pink feather boa and, yes, wearing a hat.

Easterling, who was given to say, “Age is a number, and mine’s unlisted,” was a flamboyant figure in an equally colorful town. Born Marycathyren Gambino to a Catholic family of nine, Easterling lavishly entertained locals and celebrities alike. According to the obit written by Dennis Persica, guests included singers Paul Simon and Robert Goulet, actor Larry Hagman, writer and composer Paul Bowles and political figures including former Gov. Edwin Edwards and retired Gen. Wesley Clark.

She was fond of Champagne but fussy about the flutes, Persica writes, and sometimes carried her own Waterford crystal to restaurants.

In a 1998 interview for the paper, Easterling told writer David Cuthbert she’d been wearing hats since age 2 – except when bouffant hairstyles made it difficult during the 1960s – and had hundreds of them stashed around her house – in boxes, closets and even in the bathroom. The house also featured many portraits of Easterling, and there was a nude sculpture of her out by the pool.

On the flip side, however, she was a known philanthropist, active in charity events, particularly those for the arts and sick or disabled children.

Once other media learned about Easterling’s funeral, the obituary went viral and there was live television coverage of the event. From the New York Daily News to the Daily Mail in the United Kingdom, stories included glittery details from the extravagant send-off right down to Easterling’s brooch that spelled out “B----” in diamonds.

The embalmed Easterling was propped up in the Saenger Theater on an iron bench surrounded by white orchids in a garden setting said to replicate her backyard. A bottle of Veuve Clicquot and a pack of cigarettes were close at hand, and Easterling had her own cigarette holder between two of her lacquered fingernails.

An ABC News story reported by Alyssa Newcomb included an interview with Caleb Wilde, a sixth-generation Pennsylvania mortician said, “Most funeral homes, the most extreme thing they might do is dressing the deceased in shorts.” He said the “extreme embalming” necessary to have a dead person hold a pose is rare.

But it's not unique. Jazz drummer “Uncle” Lionel Batiste was propped up on a street lamp for his 2012 wake and in Puerto Rico, a dead cyclist was astride a motorcycle at his viewing.

Easterling’s daughter, Nancy Myke Easterling, said her mother “loved the limelight” and that her specific request for the funeral event were “a nice way to say, ‘The party’s over.’”

Cheryl Clemmens is now a member of LegacyConnect
11 hours ago
Welcome Them!