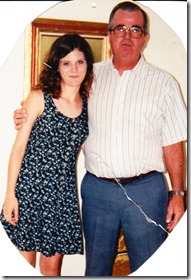 In late January of 2010 I got the news that my father had a tumor and he had to have surgery. But the catch was the tumor was in his thyroid and they had to remove it and get all the cancer. Well on February 9th 2010, he called to tell me he loved me and that he had a good feeling about it and not to worry god was watching over him. He told me he would call me the next day after he was awake from surgery, to let me know he was ok.  I told him I loved him and I would be praying and we hung up. That night I prayed and cried and prayed and cried. I kept thinking I am only 32 and I can’t lose my dad this young.

I got up the next day, with hope of hearing from him and all day I stayed glued to my phone waiting. I called my sister and she said she had not heard yet either and that he had a friend of his there and surely we would’ve heard something if it was bad. So I left it at that and still had a sharp pain in my gut. The next day I got a phone call from my sister who informed me that dad had pneumonia and she was flying to Florida to be there and she would keep me posted.

Well soon after she got there she called to tell me I needed to come, that it did not look good. Here I was thinking no not now god no. And why now so close to my birthday, not like this, I was angry with the whole entire world. So the first flight I caught was Feb. 20th the day after my 33rd birthday.

I got to Florida and the first thing I wanted to do was see my dad. I had been warned by my sister of what he looked like, but I didn’t care. I walked into my dad’s ICU room and all I saw was my dad laying