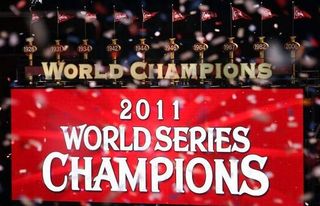 As the St. Louis Cardinals and Arizona Diamondbacks play their opening game of the 2013 season on April Fools’ Day, there is a “team” of fans who will be watching with particular nostalgia. The grown children of John George Hendel who died March 16 will no doubt be thinking of their dad, who was a fan of both teams as he was born in St. Louis but lived and died in Phoenix.

That would be Jean, Mike, Rick, Bob, Garry, Pat, Mark, Beth and Chris – ages 67 to 51—who honored their father’s fondness for the sport in a short-but-sweet obituary that read like a draft notice:

In negotiations concluded earlier today, John Hendel was traded to the Angels. Originally from St. Louis, Mo. and a life-long Cardinals fan, along with his teammate of 35 years, Montrose [drafted in 1979], now with the Angels, they fielded a team of their own (nine) here in Arizona.

Jean Hendel Martorana, the oldest of the siblings, said that despite her father’s age, 94, they had not thought about an obituary. “We had thought about a eulogy and who was going to speak but didn’t think about the obit until the last second.” Her brother Richard said the idea for the baseball draft came to him when he was cutting the lawn – “a needed distraction” after being cloistered with his siblings for his dad’s last days.

“It had to be about sports,” he said. “He had taken us to our first baseball games, I had taken him to the Diamondbacks game ever and the World Series a few short years later."

Montrose, John’s first wife, had been a night club singer with Les Brown and His Band of Renown, but died – “was drafted” – just days after diagnosis in 1979 of acute leukemia. Richard said the six boys rented suits and served as her pallbearers. Polly, John’s widow, was cited in the obituary for adding “star players” to the team on the “deep bench.”

When the family attended ballgames at Chase Field, they sat in two rows, back-to-back, and wore baseball gear. On the last Father’s Day when the “team” was all together a couple of years ago, Jean said they took turns “sneaking” to the concession to bring back Diamondbacks paraphernalia as gifts for their dad.

Jean, an English teacher, said, “We didn’t want it to be too baseball-y, but enough to show his interests – in baseball and family.”

At 94, John's heart was still in the game and his loss puts a big hole in the roster, but we knew that his talents were needed up in The Big Show.

You can read the full obituary on AZCentral.com.