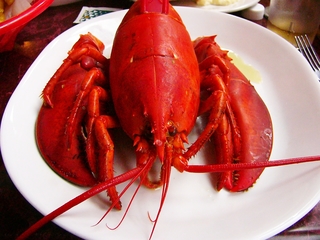 Why lobster? Because no one we’ve ever known before or since could pick a lobster cleaner than Suzanne “Hebe” Moeller Soper. She perfected handling of lobster “crackers” and picks to get any and every edible morsel out of the shell. Out of each skinny leg and each piece of the flat, fanned pieces at the end of the tail. Even including the gooey green stuff that made the rest of us cringe!

She could do the same thing with a pork chop or chicken wing, stripping it clean to the bone and then some. But notice that we selected lobster to celebrate her: a much more special treat.

When she died in 1968, at the age of 45, we were just coming into our own but still needing the sure hand and guidance of our dad who was very supportive and creative in his own celebrations – so maybe we picked up that commemorative gene from him.

When our mother turned 40, she insisted she didn’t want any “fuss” – no parties, no surprises, no special attention. We all took her so to heart that we essentially ignored the day altogether and, of course, she was devastated. We thought we were doing exactly what she wanted, but now I understand perfectly well how women often don’t mean exactly what they say – particularly when a birthday is involved!

Five years later, she was gone and, with our dad leading the way, the rest of the family began putting an over-emphasis on birthdays culminating in 40th celebrations he planned for us that were total surprises and tailor-made to suit each one.

So, now, carrying on, we don’t miss a chance to celebrate Hebe’s birthday – she’d be 88 this year – and we look forward to the lobster feasts.

In better economies, we have dressed up and gone out or ordered lobsters to be delivered direct from Maine, caught fresh the day before and carefully wrapped in seaweed and dry ice. We have hosted lobster dinners for friends – high school friends, college friends, new friends – even, one year, an old boyfriend who was the last non-family member to see Hebe (before he shipped out for Vietnam). We have picked them out from grocery store tanks and were lucky enough to be in Maine during one July birthday where we happily had lobster for every meal.

This year, we enjoyed a delicious dinner at Red Lobster with another couple, a new experience altogether.

The point is, it’s not hard to settle on a way to remember a person who deserves to be kept alive – one way or another, flush or thrifty, party or solo.

Focusing on lobsters doesn’t mean we don’t remember our mother’s intelligence, literary and artistic skills, her beauty, life lessons or especially the years of loving care she generously gave us – all things that are celebrated in our minds and hearts on a daily basis. But it’s fun to wrap them up, wearing a bib, dripping butter and drinking a toast: “Happy Birthday, Hebe!”