George and Mal had been unlikely friends. A 70-ish white man, decidedly Republican and retired though not a “suit.” And a handsome, 20-something African-American who left the University of Michigan – after winning the NCAA singles championship – to play professional tennis. Mal went on to become number 11 in singles, beating such players as Agassi, Connors, Becker and McEnroe. But through my dad’s work with the ATP (Association of Tennis Professionals) in Ponte Vedra, they bonded over time and, in a way, are still bonding over the annual George M. Soper Player of the Year trophy and scholarship awarded by the MaliVai Washington Kids Foundation to a kid from 10 to 14 or 15 who has excelled in character and potential and needs a boost to help make great things happen in life.

The Foundation started by offering tennis lessons to select Boys & Girls Club youth and has expanded to offer a variety of activities for students in kindergarten through high school. In 2008, the MaliVai Washington Youth Center opened in Jacksonville’s roughest, poorest, most challenging area as a place for inner-city Jacksonville kids to go to feel safe, learn fundamental life skills, get help with homework, find a mentor and learn the sport – and life lessons – of tennis.

Each year on the Monday following Labor Day, these kids join top tennis players, celebrity athletes, a handful of actors and scores of dedicated supporters and volunteers of all ages at a gala awards dinner. They literally blow the adults away with their presence, speeches, accomplishments, dedication and humor.

Although we often think we don’t have enough time or money to make the trip from Atlanta to Florida, we are always glad to attend the event and each year vow we’ll never miss it. I hope we never do.

This year, 21 kids received scholarships worth $100,000. Jim Furyk, who just won at the Tour Championship and the FedEx Cup, recently gave a $30,000 check to the foundation – a portion of the Presidents Cup he won at Harding Park in California.

Since the beginning, more than $400,000 in scholarship money has gone to students and now some of them are leading the way, going through college on tennis scholarships and even teaching tennis.

Because many of these student-athletes have overcome incredible odds – virtually all have been challenged by poverty, many have relatives in jail, some have witnessed shootings, one emigrated to the U.S during the Bosnian conflict – the George Soper Players of the Year deserve a nod. Of the 14 who have taken a small replica of the trophy home, the foundation has lost touch with only two. Here’s how the others are faring: 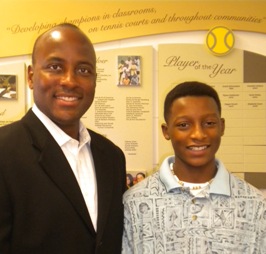 1998: Candida Breland attended the University of North Florida, is now a manager of a restaurant in Jacksonville and attends the gala every year.
1999: Gracie Edmondson works at a daycare and is in school part-time.
2001: Markevius Collier is attending Florida State College Jacksonville and works for the foundation teaching tennis. He also gave a very self-assured and inspiring speech at the dinner this year.
2002: Marc Atkinson also works for the foundation in the summer when he’s not attending classes at FAMU.
2003: Rijana Hadziadvic graduated from the University of North Florida and is now working full-time.
2004: Kenia Stokes is at FSCJ with Syreeta Smith (2006).
2005: Keanna Bell is a senior at Stanton College Prep.
2007: Reggie Bryant is at Sante Fe Community College.
2008: Shadarian Davis is at South Carolina State University.
2009: Adrienne Clark is an 8th grader, as is this year’s winner Trenden Davis (pictured here with Mal Washington) who, after I handed him this year’s trophy, took me over to meet his mother who gave me a huge hug.

No question that George Soper never imagined his friend Mal would create a foundation serving up so much hope, touching the lives of so many kids – almost 20,000 so far. But for those of us who wish he had lived forever, this is a way to keep at least his energy and spirit alive in a way he would understand: teaching life skills, fair play and good sportsmanship. While Mal Washington is quietly developing young champions, he is also helping our family keep our hero alive, too.

Are you keeping the memory of a loved one alive? Whether you celebrate a loved one's legacy with a 5K memorial race, an annual festival or a quiet meal, we'd love to hear from you. Please contact Susan at info@obitkit.com or share your story in the comments section below.

Comment by lynne lawrence on October 18, 2010 at 11:29am
Hi my name is Lynne and I lost my beautiful daughter Vicki, she was beautiful inside and out and had just started her training to be a childrens nurse. she got to ware her uniform for just one night, She was a little poorley for two days and went to the doctors on the thursday on the thursday who diagnosed her with gastro-enteritus the next day she died in my arms. This happended 12th dec 2008 and we buried my gorgeous girl on 23rd Dec. I really can'tcome to terms with her death. she was 19 just when her life had begun it was snatched away from her. each day Iam in floods of tears. I am so sad that my family is not complete and dread the run up to christmas