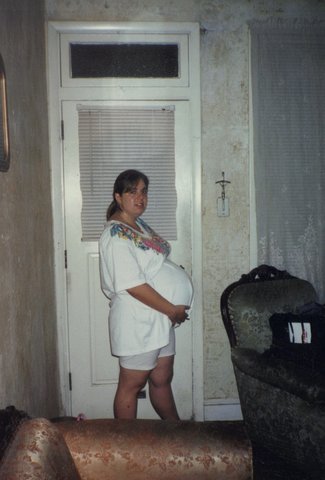 When Gi was pregnant with Timmy, Live, an alternative rock group from York, PA, released their album Throwing Copper.  There was a song, Lightning Crashes that put a fear in me.  The song was about a woman dying while another gives birth.  The image of an angel with pale blue eyes stood out in my mind.  This angel standing between two events of life and death; witnessing the confusion of the human condition of grief and joy as she closes her eyes as the “old mother dies” and opens them as a baby cries for the first time.

Every time I heard the song I would tell Timmy how it reminded me of his birth.   I know he got tired of hearing me say it; but when the song came on the radio he would turn up the volume to the maximum.  He asked me what was it that hooked me on the song and I told him about the angel.

When he was an infant, he would look up to the corner of the room.  When asked what he was looking at, I replied an angel.  I believed that babies can see things we can’t because of their innocence.

It was around the same time that the show ER had an episode of a woman dying during child birth and the father having to face raising his child alone.   I sat and balled my eyes out.  I felt like I was about to live that moment when Timmy was born.