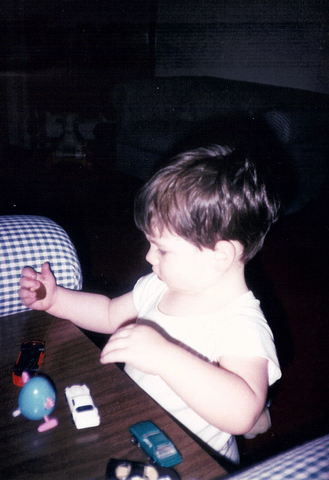 When Timmy was one year old, I started buying him Hot Wheels.  At first it started with the Happy Meals at McDonald’s.  I would stop at the McDonald’s near Girard Avenue and buy the Happy Meal, eat the burger, fries, and slurp down the soda just to get the toy car for my son.  Timmy enjoyed playing with the Hot Wheels and Matchbox.  I started going to Toys R Us just to find special packages that I remembered playing with as a little boy.

Soon I was taking Timmy out.  Simple little walks with him in the stroller.  I would walk up the McDonald’s up at Castor and Aramingo.  It wasn’t the same one that is there now, it was the old style from the Seventies with a defunct playground in the front.  I would order the food and then put Timmy in a high chair.  I would turn and face Timmy until the order was up.  I was so afraid of someone taking my baby.  He was no more than five feet from me.  Within time we had become so regular that the counter-girls would give Timmy an extra toy or put in an extra order of fries.

It was on one of these treks we stopped at the flea market that was in an old warehouse on Venango Avenue, about a block in from Aramingo Avenue.  I was still working for a private ambulance company, and had been promoted to dispatcher.  The Mars Pathfinder rover had just landed on Mars a month or so earlier in July, 1997.  Hot Wheels put out a limited toy to commemorate the NASA mission.  I wanted to get one for Timmy and couldn’t find it anywhere.  As I browsed the flea market stalls, with Timmy in the stroller, I found one and paid a collectors price of ten dollars.  It was selling for about four dollars in Toys R Us…Amazon.com didn’t exist yet, let alone the internet as we know it.  I figured I would put it on a shelf for when Timmy was old enough to appreciate the toy.  I didn’t understand the determination of a two year-old boy to get a toy.

About a week or so after putting the toy up on the shelf, Tim and his cousin John used his crib to climb to the shelf and opened the package.  I was annoyed.  I shouldn’t have been.  But I had found a second edition of the toy later at a KB Toys that I put away for when Timmy would be older.  There were a few toys I bought duplicates of over the years, including the movie edition of the twelve inch Spider-Man action figure and a silver edition of Hot Wheels and NASCAR toy cars.

It was around the same time browsing the flea market with my son; we wound up adopting a kitten.  Tim saw the kitten in a box, she was all black.  Timmy refused to leave without the kitten and I would have no other choice but open my heart to adopting this animal.  We brought the cat home and Timmy promptly named her Sabrina after the character from the television show.  I had to make a separate trip to Kmart and Acme for cat litter, litter box, bowl, and food.

It was the beginning of our father-son outings.