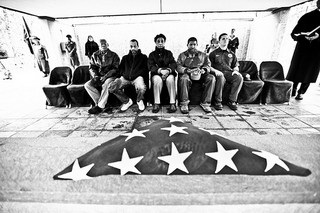 Plans are underway for a military family bereavement study, according to the Military Times. The proposed 5-year study – the first of its kind – would focus exclusively on military families and the impact of death – whether in combat, by suicide, or due to accident or other cause.

Conducted by the Center for the Study of Traumatic Stress (CSTS), the study seeks to survey 3,000 survivors and also plans focus groups and interviews of survivors. According to Dr. Stephen Cozza, psychiatrist and associate director for CSTS, more than 10,000 service members have died since 2001. The study hopes this spring to begin enrolling participants, including spouses, parents and siblings of deceased service members.

More about this military bereavement study on MilitaryTimes.com

I would like to see a change in the way the military handles how they communicate with the family after the death of the solider. My son was found dead in his barracks by another solider. the military did a investigation on my sons death which took a year to be compleated. i had gotten the wrong information so many times durning this investigation. it was driving me crazy. it seemed know one knew what they were doing. i would get calls from different people who were handeling my sons affairs back at ft campbell,ky i would be told onething and then i would receive another call and be told something else.they need to have only one contact person with the family. half the time i felt the right hand didnt know what the left hand was doing.they even gave the causality officer  wrong information and the run around. she was always saying Mrs Johnson i am so sorry this has never happend before i am so sorry.they treat our dead soliders like a number instead of someones loved one.

I would like to see more help given from our military with making sure the widow has proper counseling. I had a horrible experience with decision making from a councilor giving very poor advice that has affected my intire life due to his lack of knowlege regarding counceling a grieving widow...This is so curcial, as most of us widow's are not in our right  mind to think clearly, as we are so vulnerable the first year or so, and should NEVER make any life changing decision's the first year, and with very wise and knowlegable council.....please do more to help with counseling...i would pray not one more widow would have to endure what I went through...thanks!