Well, one of the things I've accomplished is an Associate's Degree as a Medical Administrative Assistant.  I would have never gone to college if it weren't for losing Tom.  We were married right out of high school and Tom always took care of me.  I had been a stay at home mom and small daycare provider since we closed our store in 2001 and before that it was 1997 since I had worked in the real world.  After he died I had no idea how I was going to support us so I decided to go to college.  I was so blessed to receive a full scholarship.  That was definitely some divine intervention!  I was able to hold a 4.0 average and at graduation received the distinctive Director's Award...such an honor.  I was also interviewed for a story for a supplement in the LA Times.  I got to tell my story and promote online education.  Again, I felt so honored and blessed to be able to do this.  As hard as it was to start taking classes they really helped keep me distracted from my grief and gave me something positive to focus on.  I haven't started the job hunting process, but I will have to start very soon, Our baby will be graduating from high school and going off to college next year, so it's time for me to venture out into the big world.

Tom was really missed and needed when our niece, Taylor, was in a bad car accident.  She broke her pelvis in multiple places and was wheelchair bound for a couple of months, plus fractured vertebrae, and small brain bleed.  Taylor adores her Uncle Bunzy and I just have to believe that, although he wasn't here to help us or her though this, he certainly must have been there holding her hand through the accident and all of her healing.  Thankfully, Taylor is doing very well.  She's now a hairdresser and is getting married next Wednesday, 12/12/12.  I know she wishes Uncle Bunzy could be by her side that day, but he will always be with her in spirit.

Getting a headstone for Tom was huge drama! I have always wanted a double heart shaped stone with our picture engraved in it.  When I ordered the stone I designed the double heart with our picture plus pics of Tom with his Chevelle and his snowmobile and the back was to be pic of a water scene with Tom fishing and the words Always and Forever written on top and a saying at the bottom.  It was suggested by the sales lady that I put the water scene on one half of the heart and the words on the other half.  So I agreed to that, but when the drawning came back for approval the water scene looked like someone slapped on an 8x10 photo instead of the pic filling in the whole heart.  I asked about that and was told the pic will look bigger once it is shaded around the edges.  Ok, that answer worked for me.  When the stone came in...it was awful.  None of the pictures had shading as they were supposed to, the water scene was as small as it was when I approved the drawing and because I wanted so much on the stone I was told I need a very large stone.  Well, this stone had so much empty space on it I paid for way more stone than was necessary. I was crushed that the stone was not what it was supposed to be.  I paid a lot of money to be unsatisfied.  The company said they wanted to work with me, but after over 3 months of discussion and them wanting to charge me a lot more money to fix it I finally "fired" them.  I had another company come pick up the stone off their lot and basically redo most of it and they didn't charge me what the original company wanted to charge me.  When the work was done by the second company I was so pleased with all their work.  They fixed the shading on all the pics, they made the water scene fill the whole back of the stone and redid all the lettering on the back.  The stone was perfect!!  When they placed the stone I had it covered with a sheet so no one could see it and we had a big unveiling with many of our family and friends.  Everyone was in awe at how beautiful the stone turned out. So, it took two years for me to design the stone and over a year for it to be completed the way I wanted it, and it was placed so that we could have our unveiling on our 28th wedding anniversary.  It was the best anniversary I'd had in 3 years.

Tom's missed out on so much of our son's adventures.  Nick has tried to make us into a farm with all his birds.  He's had a love for birds since he was little and has hatched quails and pheasants since he was about 10.  This past few years it has gotten out of control.  We now have had multiple kinds of peacocks, turkeys, pheasants, quail, partridge, chickens, and all kinds of exotic ducks.  I have to keep reminding him he is going off to college next year and the birds are all going away before he goes.  Dad has missed out on all the hunting and fishing trips and Nick getting his permit and teaching him how to drive because mom is way too nervous about it.  Nick actually started hanging out with friends; he used to be quite a loaner.  I even let him camp and hunt with his friends - that was such a hard decision for me to make.  I wasn't ready for him to have this independence, but I had to remind myself that Tom did those things when he was a teenager and I'm sure he would have allowed Nick to do those things, too, so I gave in.  Tom's missed out on our son becoming Senior Class President.  That was a total shock.  Nick never wanted to be involved in any school activities, hunting and fishing were way more important, but he decided to run for president and won.  So, this year Nick has participated in dances, gone to basketball games, stayed after for meetings - all things he had never done before.  He was voted class clown and most likely to become president. Who knows where the world will lead him!

Our middle daughter, Amanda, made us grandparents a year after Tom left us so he missed out on our Lilyanna Tommi and her growing and changing everyday.  She definitely keeps us on our toes. Amanda has since graduated with her second degree as a Physical Therapy Assistant to go along with her degree of Sports Nutrition Fitness Management. She's been working since graduation as a PTA and she still continues to work part time for the same place she's worked since she was 14 years old.  She's hoping to make it into the State Troopers next summer.  She's got what it takes and I know she can do it!  She's really working hard and making a life for her little family.

Our oldest daughter, Autumn has graduated with her Master's in Art Education.  She also graduated from Aesthetics school.  She is a worker and works 3 jobs: doing make-up at Sephora, doing facials at a spa, and teaching Aestetics,  She just never slows down.  And....the biggest thing is...she got married October 7th.  Her husband is wonderful and Tom would have loved him.  We tease Autumn that she finally got it right by choosing Mitch - her other boyfriends, well...they never really hit Tom's approval mark, but Mitch was heaven sent.  The wedding was amazingly beautiful!!!  Dad was missed so much!!!  Nick walked her down the aisle (that was hard to see).  He looked so proud and handsome walking with her, but it hurt to know it wasn't her Daddy walking her.  We had a seat saved for Tom next to me for the ceremony and Lily placed her lily flower on his seat and we had a rememberance table set up to honor Tom.  Of course, my father in law didn't think that was good enough and wanted a moment of silence, so he caused a scene getting our son and Autumn very upset.  She didn't want a moment of silence because it would have been too painful, plus less than half the room knew who he was.  It wasn't a memorial - it was a WEDDING!  Needless to say, he left.  Autumn will always feel he ruined her wedding, but in time she will see that it was only a small glitch, but the rest of the wedding was perfect!

I'm sure there are many adventures and events that I am leaving out, but this is a highlight of all that has gone on without Tom here.  Everytime something happens I immediately wish Tom was here to be a part of it, but I do know that even if we can't see him he is here and not really missing out on anything.

Bunzy, you are so missed each and every day.  You are a part of every breath I take.  Everything I do is with you on my mind.

I love you, Bunzy ~Always and Forever~

Scroll down...I've added pics of the headstone and some family pics, too.  Here's a video and some pics from the wedding 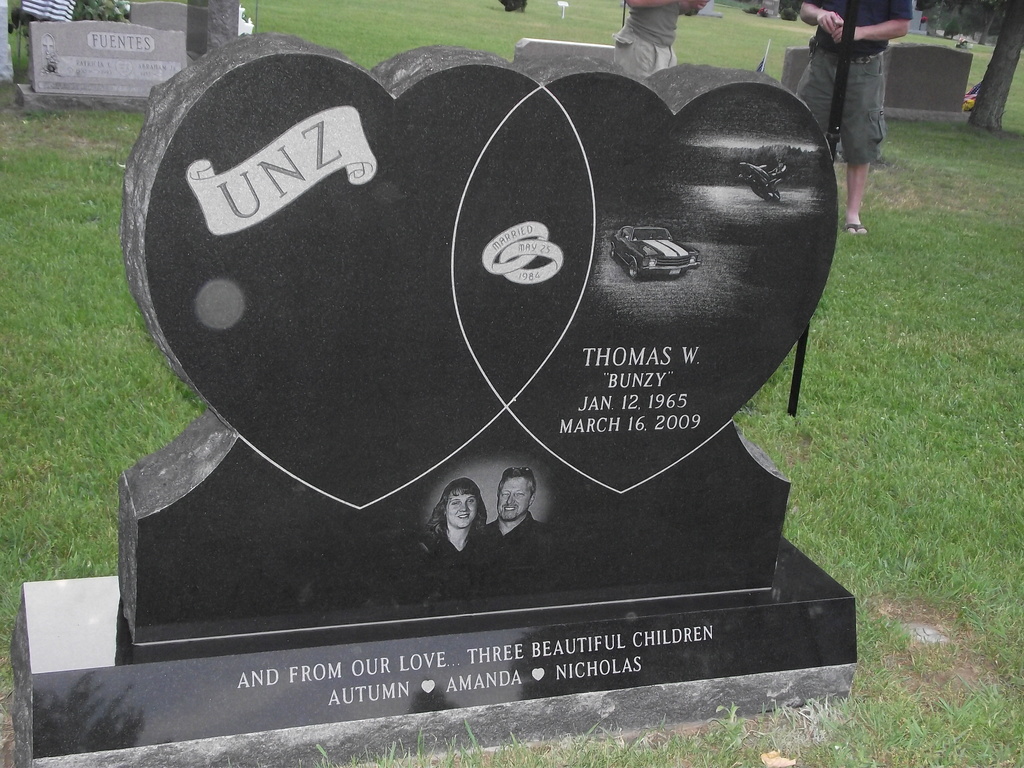 Front side  I just realized there is a spot (maybe an orb?) on the headstone that's not really on it. 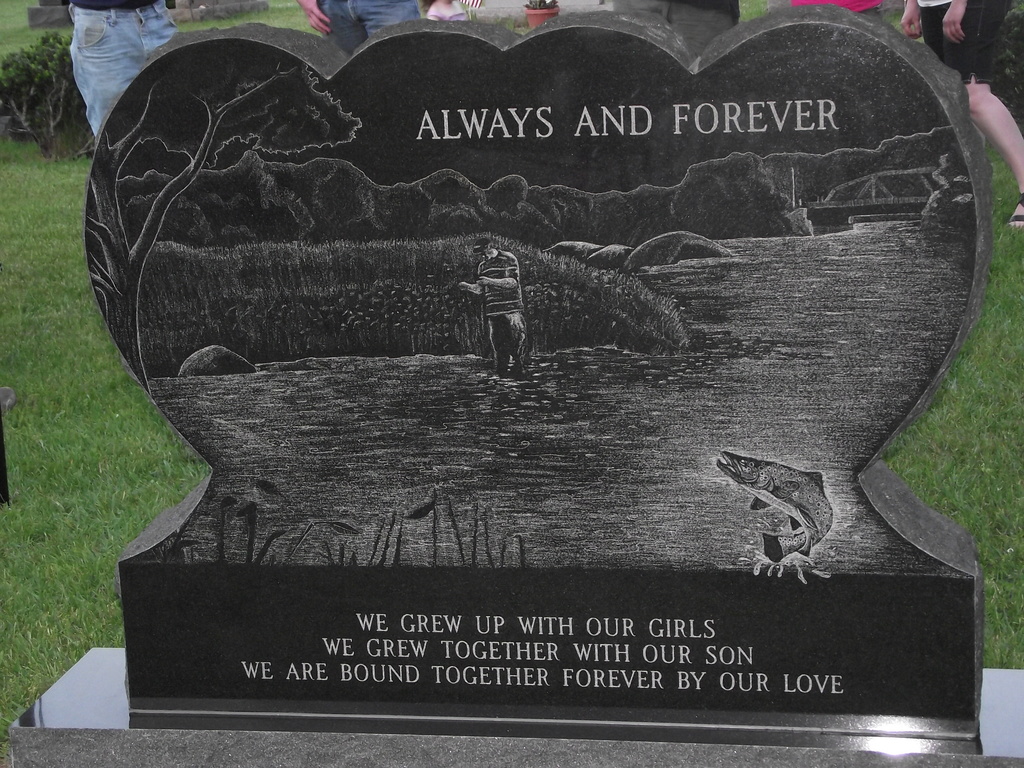 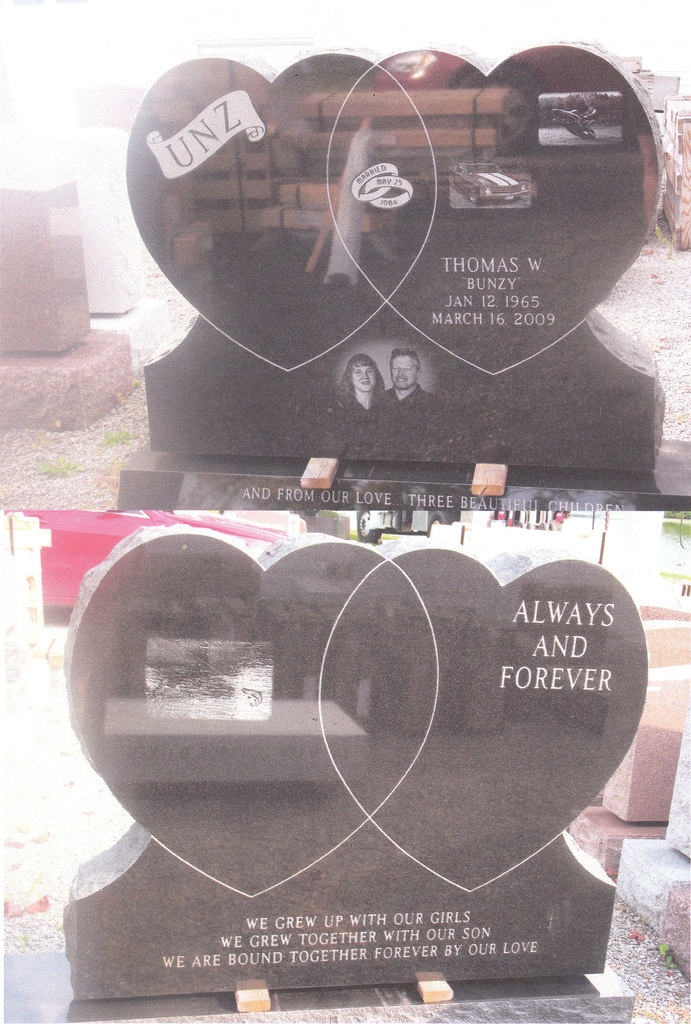 This is the headstone before it was fixed ;( 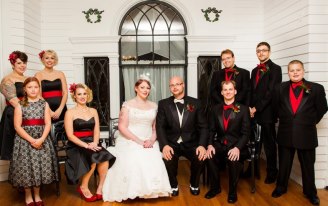 The wedding: Autumn and Mitch, of course, Amanda to the right of Autumn and Taylor, our niece, the blonde behind Amanda. 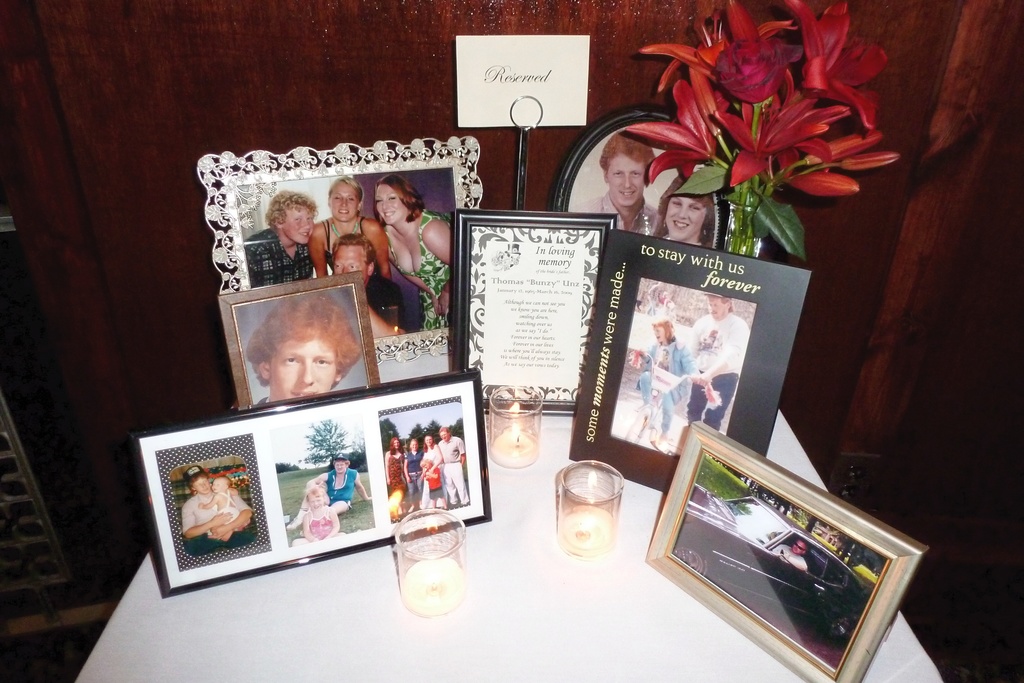 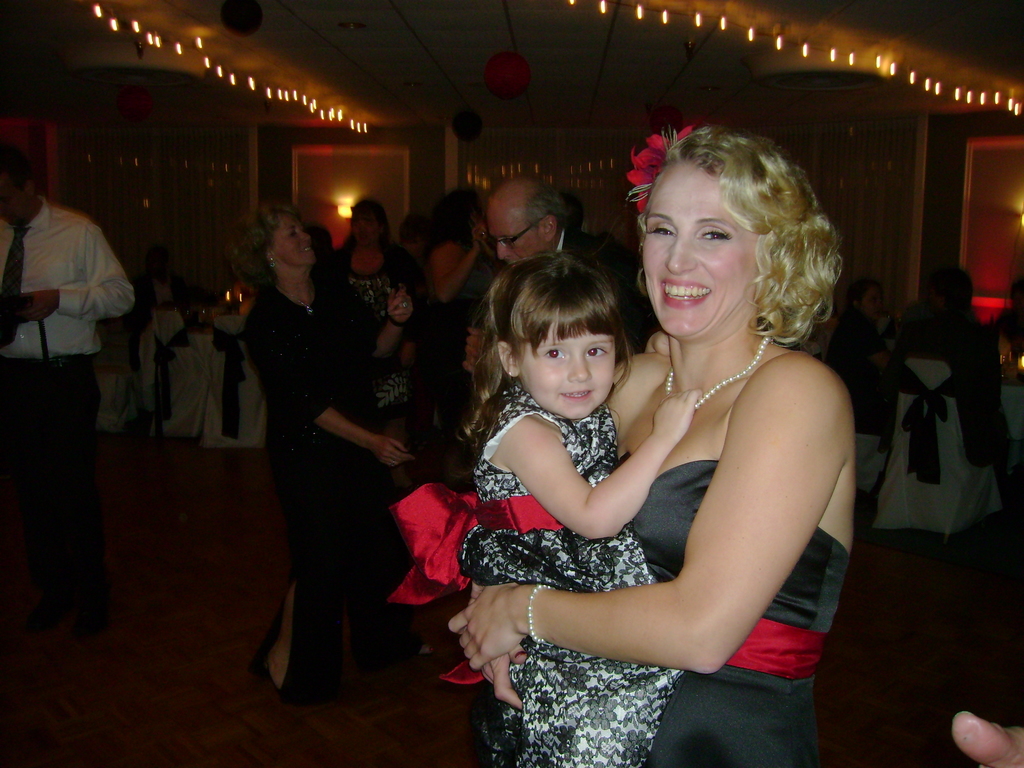 Amanda and Lily at the weddng. 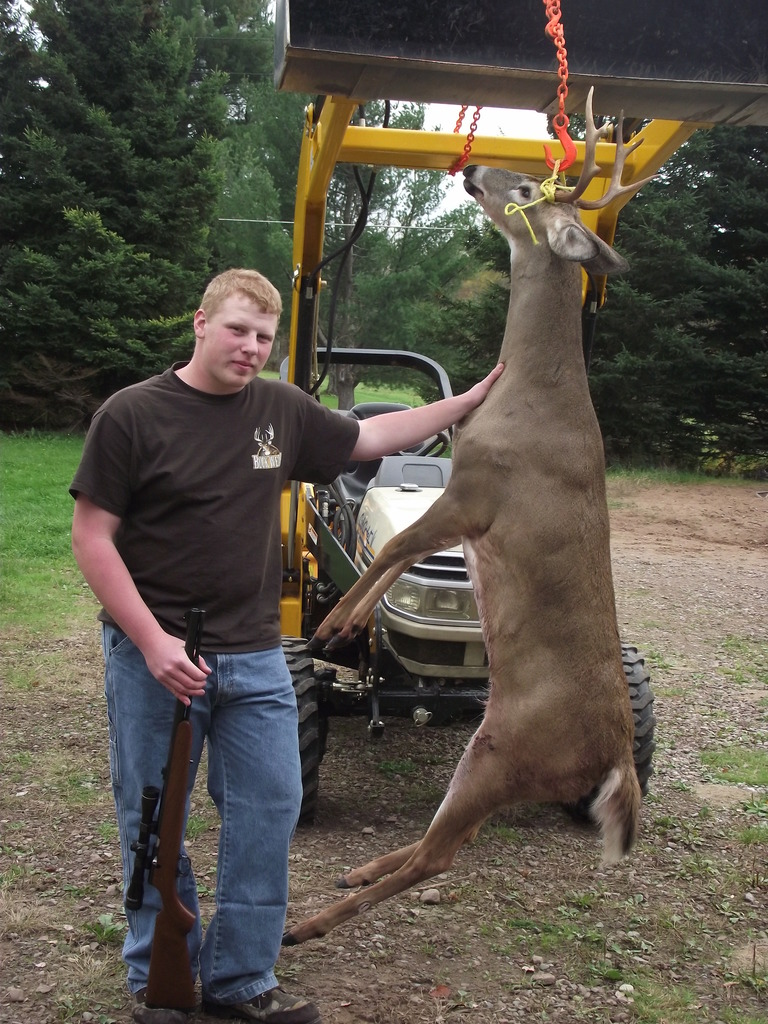 Nick and his deer.

Marlena,  The stone is just perfect and I hope someday to pick out one like it for my beloved wife, Noreen, who passed away on Aug. 28th.  The grief is so raw right now that it is like being in a fog and just seems unbearably. She was just 60 and we were together for over 40 years. Reading your post about how your life has gone on in so many positive ways gives hope that better days may be possible. Life is just about unbearable now an I am not wishing for a long life without her. Your son looks a little like my 18 year old grandson, Justin, who just got his 150 lb. doe last week. He signed up for 4 years in the Marines when he graduates in June. I tried to talk him into the Coast Guard or Navy but he had his heart set on the Marines since childhood.  My Noreen would have been so worried about his choice.  Good luck to you in finding a job and best wishes for your wonderful children.  It is nice when people such as you come back after years have passed to give us hope as to what the future can be for us.

I am so proud of everything that you have accomplished for yourself and the family! and the stone you designed and worked so hard to "make right" is absolutely magnificent. I am overjoyed reading about your wonderful focus, career goals, family, dear Bunzy, everything is just so well attended. Hugs and best wishes....you are one beautiful lady!

Nicole Shephard is now a member of LegacyConnect
Friday
Welcome Them!