New Year's Day Can Be Any Day 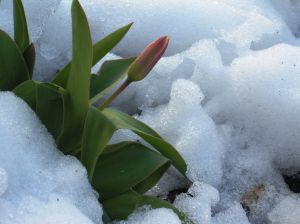 Last January I was a complete washout! I allowed a disturbing telephone conversation with a family member to push me into deep depression. Any thoughts of evaluating my past year and making resolutions were abandoned. So I’ve chosen TODAY as my New Year’s Day instead. I take stock of my life.

WHERE HAVE I BEEN? I’ve been to the bottom! Those periods of deep mourning for Joe were the absolute pits. I went through it, as I knew I had to, but thank God the worst is over. I’ve dealt with frustrations, disappointments, and loneliness. I’m learning to talk to myself with more nurturing words. Nights were the hardest, but I survived. Joe’s belongings have been shared or saved. Memorials have been established. I’ve made new friends. My affairs are more in order. Much of the guilt has been released. I am learning to take better care of myself. I have found strength to go on. I’ve come a long way.

WHERE AM I NOW? I’m not the same as I was before Joe died. I now am a person in my own right, not sharing an identity role with another. Without being selfish or totally self-centered, I place more value on myself. I am beginning to experience today as being more important than yesterday or tomorrow. My proven strength is intact; I can draw on it. I value relationships more and the quality of interaction. Therefore, I choose friends more wisely. I can touch the depth of others’ grief, but I cannot take it from them. I am more calm and centered. I can keep my memories and love for Joe while choosing a new life for myself.

WHERE DO I WANT TO GO AND HOW? I choose to continue the positives I’ve begun: good health habits, nurturing self-talk, pleasure in the moment, and quality relationships. My primary direction, however, is to add more meaning and purpose to my life. I choose to do this by returning to my field of work and selecting a specialty, continuing to write, reconnecting with my family in more mutually fulfilling ways, and deepening my religious faith and outreach.

Goals need to be stated in measurable terms. The areas described above each deserve a page where I can list specific actions to reach each goal. I also need to find ways to check my progress at specified intervals. The doing is up to me.

Where have you been? Where are you now? Where do you want to go and how?
Share your story below.

Marta Felber, author of Grief Expressed When a Mate Dies

and Finding Your Way After Your Spouse Dies

, has held many counseling and consulting positions in the U.S. and abroad, including serving for 10 years as director and head counselor at a center for expatriates in Jakarta, Indonesia.

The old saying ,"Lightening never strikes twice" is far from true, as I am living proof.  Twice, I was left a widow in a twenty year period. When my first husband died suddenly at age forty, I was totally devastated.  He was my high school sweetheart whom I started dating at age sixteen.

When he died, my intense grief was assurance that I would never love again.  Much to my surprise, I was wrong.  I met the most wonderful man and married again within a year. Peter was my true soulmate.  He, too, had lost his wife about the same time that my husband died.

Our shared grief was what got us together.  He was a radio broadcaster, and proposed to me over the air. I will never forget driving down the highway listening to his evening news cast and suddenly, in the middle of it, hearing our favorite instrumental song as background for his beautiful, melodic voice. "We began our life in grief and sorrow, then with every passing morrow, came to find so tenderly, a bond uniting you and me. How quickly dear that love has grown...like nothing I have ever known.  Susan, dear, hear my plea, marry me."

That was the beginning of the most wonderful life I will ever know. It ended with his death over a year ago.

Where have I been?

One would think I could draw on my past experience to get through my loss but it did not happen for me. This time was different.  I tried to go on with my life, doing the same things I always did.  I grieved only in private. Everybody would say how wonderful I was handling my loss.  If they only knew.  There were times when I was hit so hard I could not get out of bed.  I lay there listening to his voice on the many tapes of his voiceovers.  I watched the numerous videos of our wedding, trips, and community theatre performances. I became obsessed with going to sleep each night listening to his voice.

I continued to work five days a week and was okay while at my job.  As a registered nurse, I had to keep my wits about me while at the hospital.

Six months later I began to see a man that had lost his wife several years earlier.  He was funny, made me laugh, and totally different from Peter.  I thought maybe that's what I needed, someone totally opposite of Peter, doing things we never did , start anew.

That lasted for only a couple of months before I knew I had to end the relationship. I was not ready to start over.  I was not through the grief process.

Where am I now?

It has been fifteen months since Peter died.  I have come to realize that there is no time limit on grieving.  Everybody's situation is different.  Even my two situations are different. I found out there is truth in Kubler Ross's stages of grief.  One will pass through all five stages of grief, but not always in the order listed.  Sooner or later you will pass through the stage you thought you would skip.

Every time I think I have worked through the stages, I suddenly find myself angry at him for leaving me even though I know he had no choice in the matter.  I still think of him morning, noon, and night.  I hear something that I know would amuse him and think to myself, I can't wait to tell Peter about this.  I still have a hard time accepting he is gone. But, I am better each day. I have come so far.

I remember saying to  him just before he died that I could not live without him  He said, "Yes you can, and you will.  You are a strong person and will get through it."

I now surround myself with my children and grandchildren.  I travel to places we never went as a couple.  I finally got rid of his chair, and painted a red accent wall in the study where he worked. I have faced the fact that what was will never be again but I still have my moments of tears when least expected. I rely heavily on prayer.  When my grief overcomes me I give it to God and pray for peace.

Where do I want to go?

Right now, my goal is to one day be able to let another

Joe Lastella is now a member of LegacyConnect
14 hours ago
Welcome Them!