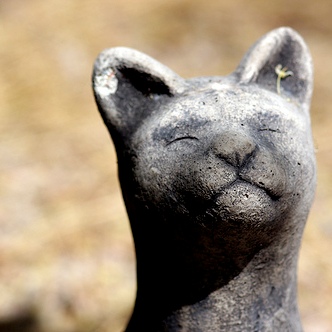 There are also many websites that will post pet obits (just Google "pet obituaries" and you’ll find them) and crematories will often offer to post an obituary, too. There are even online guest books you can log onto to share your sympathy and condolences.

And why not? Four-legged creatures are sometimes more beloved than some of the two-legged folks under the same roof!

I have a handful of friends who have memorialized their beloved dogs in a variety of ways, including in written tributes, two of which I have shared below. One is about an English setter and the other is about a Boykin spaniel who was a hunter extraordinaire. Both dogs lived in the Carolinas and brought much joy to their families.

Their personalities and special quirks come alive in these loving portraits and, indeed, will continue to live on even though new dogs have taken their place on the furniture – but not in their owners’ hearts. 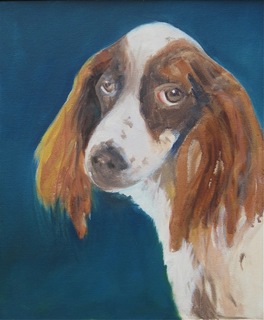 When she was just a young puppy, the vet warned us that she would not be good for breeding, and probably would not have a long life; it was apparent she had a heart murmur. We had only briefly considered breeding her, and decided against it, but were really sad to think we might not have her in this world for very long.

I think she spent the rest of her 17 years defying just what the vet predicted. She was one of the fastest dogs we had ever seen. She would stop awed folks in their tracks as she ran down the beach chasing birds, which she never seemed to get, but never gave up.

She was a beautiful English setter – light brown and white, with wonderful markings and enough spots to make her distinguished. She was very spirited and “birdy.” They said she would be good in the field – but we never tried that since we’re not hunters. We just loved her to pieces, and she took advantage of that at every turn, rolling those big, beautiful, watery brown eyes to get her way (which was sleeping on the furniture).

She loved us back by guarding us from strangers, and running interference to keep little ones from running too fast down the back lawn.

She never became an old fat dog – with the heart murmur and all, she kept her stylish figure and only slowed down those last few years. Friends commented that she stayed skinny to fit in with the rest of the tall trim family, especially her 6-foot plus brothers, who would carry her like a lamb draped on their shoulders.

I never knew how much I loved her, what good company she was after the boys went to college, until I did not have her anymore. The week after she died, I wept and wept; I decided it might be good therapy to paint her portrait; it turned out to be a very consoling way to mourn her.

After some time we got another dog, who is a personality of his own; but there will never be another Rocket Dot Commander.

I guess the good news is that in this life one can have lots of dogs!

Another good friend, Tommy Baysden, wrote this tribute to his dog, Major, as the family’s Christmas greeting several years ago. Not your usual holiday chit-chat but a loving tribute that everyone could appreciate. 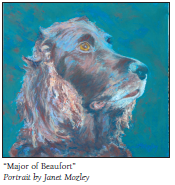 From the moment I first laid eyes on Major, I knew he had the right stuff.

Even as a puppy, he was big for a Boykin, his searing yellow eyes and wispy blond ears a testament to his forbearers – Chesapeake and Water Spaniel – so many generations back. If the AKC had really wanted to standardize the breed, they could simply have pointed to Major and said: “there – now that’s a Boykin Spaniel!”

His behavior that first day was another tip-off that he had his priorities straight. He took one look at Martha-the-cat-from-hell and knew exactly what he was supposed to do. (They reconciled eventually, after Major gained respect for the punitive power of razor-sharp claws.)

Naturally, he came equipped with the patented Boykin energy. (The word “hyper” is sometimes used outside Boykin circles). The local vet finally persuaded me, against all my instincts, to rob him of his manhood. I am here to bear witness that if this diminished his hunting prowess by one iota—it is positively scary to think of what might have been.

Training was pure joy. I quickly realized that all I really needed to do with Major was to show him what I wanted and get out of the way.

I took him to a Sporting Clays clinic where the celebrated instructor Dan Carlisle was holding forth, poised to administer a panacea of back-stroking and dog bits as soon as the shooting began. But at the first 12-gauge blast, the leash was ripped from my hand and off went Major, looking not for a place to hide, but hell-bent on finding something to bring back.

And then there were the squirrels. For Major, squirrels ranked right up there with grizzly bears and timber wolves. Those vicious rodents posed a threat to our family, and any one daring enough to come to ground was quickly dispatched, with that series of high-pitched squealing yelps that means "treed" to any hunter of coons or cougars – or squirrels.

His hunting debut took place on a dove shoot at Fife Plantation, the wonderful old Harrison family property adjoining the Savannah National Refuge. The usual retinue of Black Lab studs was on hand. You know, those muscular bruisers with heads like cinder blocks and names like “Brutus,” “Rambo” and “Thor.” Now, I love Labs, I really do. But this particular day saw the tables turned in a most amusing way.

“Baysden brought his poodle,” somebody said, as we climbed into the back of the truck. “I’d be worried about that thing if a good-size dove gets ahold of him,” someone else pitched in. 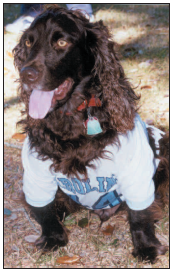 As fate would have it, the downed birds were falling on a huge pile of stacked wood, disappearing into the spaces between logs, where those big chunky Lab heads would never fit. As the other dogs circled the woodpile, whining in frustration, Major went straight up the side of the woodpile, disappearing into one of the cracks where a Lab would never have fit. Seconds later, dogs and hunters alike watched in awe as the little brown dog emerged from the pile with no less than three dead birds in tow.

Last Christmas, hunting ducks at Skeet Burris’ place near Hampton, Andrew noticed that Major seemed to be having trouble swimming straight to the birds. I brushed it off at the time, but three weeks later he was stone blind. Though it was breaking our hearts, we were prepared to love and take care of him in that condition for the rest of his life. But when kidney failure kicked in around June, the handwriting was on the wall.

Dogs reward their Masters with unconditional love – you hear that a lot. But Major took it to a new level. When inside, he had to be not only in the room with me, but touching me, stuck to me like Velcro, taking a step each time I did. In the years that we were together he was my friend, my traveling companion, my playmate, my partner in the field. No matter how mad or frustrated I got with him, he never got mad or frustrated with me.

You can never really replace a great dog, for they are as different one from another as we humans are. But you can hold them in your heart and your memory, and lavish that same love and appreciation on the next one to come along, should God grant you such luck.

So farewell, old dear Major. Come on in, Jackson Browne!