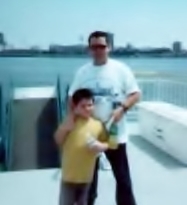 In August 2001, my vacation time finally came around.  We were planning a trip to Knoebels Amusement Park in the Poconos and trip to an underground cavern near Pittsburgh and possibly a trip to the Statue of Liberty.  I can’t explain why I felt uneasy about the trip within a few days we were to pack up and go.  But I did.  I decided we would take a stay-cation and go to the Camden Aquarium and the beach instead.  I didn’t want to disappoint Timmy, but my unease grew greater until I won the argument with his mother.  I wasn’t looking to win.  I was, in my mind, wanting to protect my family and I couldn’t explain my “feeling.”

The first day was to the aquarium, now renamed Adventure Aquarium, where first we stopped at Penn’s Landing and showed Tim the Olympia, sister ship to the Maine – the Maine was sunk in Havana Harbor and started the Spanish-American War.  The Olympia was the flagship of Admiral Dewey.  Next to the Olympia is the Bacuna, a World War II submarine.  We took the tour of the vessels.  Tim enjoyed being able to pretty much run about as any six year-old would.  He explored every nook and cranny that was not hindered by Plexiglas, chain, or door.

I told Tim how in 1965, my parents had gone to see the Olympia docked for tourist.  There was military pomp and circumstance, a throng of Navy officers and enlisted were on hand.  My parents had me dressed in a sailor suit and a group of sailors asked if they could take me on a tour.  He asked if my parents had come with me and the sailors.  I told him I was too young to remember.  I wasn’t a year-old at the time.  He laughed and said that maybe I was kidnapped and raised by one of the sailors’ family.  Tim didn’t care about the Spanish-American War, Admiral Dewey, or anything for that matter about the ship and submarine.  They were just playgrounds on water.

After the ships we went to the aquarium by ferry from Penn’s Landing.  We went to the upper deck where the mounted coin-operated binoculars were.  I picked Tim up to have him look through all points of the compass.  It was hot that day, nearly 100 degrees or more.  I remember Gi and I couldn’t wait to get to the passenger deck to get out of the sun. 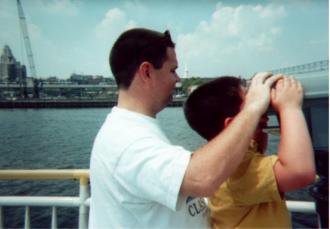 When we docked and disembarked, the aquarium stood before us.  Once inside Tim couldn’t wait to seek out his first love of animals – the sharks and mantas.  He knew they were related.  He knew quite a bit about sharks.  We got him everything printed or VHS tape.  My mother had taped Shark Week on the Discovery Channel for Tim.

When he was younger he tried to sneak a copy of Jaws into the shopping cart at Wal-Mart.  Tim was seated in the child seat of the cart.  I took it out and put it back on the display.

“You’re too young for this movie.  You’ll have bad dreams and I’ll get in trouble.”  I admonished Tim.

“Aw, Daddy,” he said with a pouting lip.

I saw another movie that I thought Tim would be interested.  I turned for a moment.  I knew later I shouldn’t have.

As we were purchasing our items, the cashier told me the total was twenty dollars more than I expected.  I asked her to check the receipt.  I wasn’t watching her scan and bag our items; I was playing taking the nose with Tim.  As I stood there with my thumb between my index and middle finger, saying “I got your nose” the girl showed the receipt to my wife.

I stood there with crossed brows, and shook my finger at Timmy.  I turned to his mother.  “Well…no, not really, but he does like sharks.”  I figured I would fast forward through the gory scenes that I remembered from the summer of 1975.  I remembered my own nightmares and it didn’t help living at the shore.  Tim, however, was more brazen.