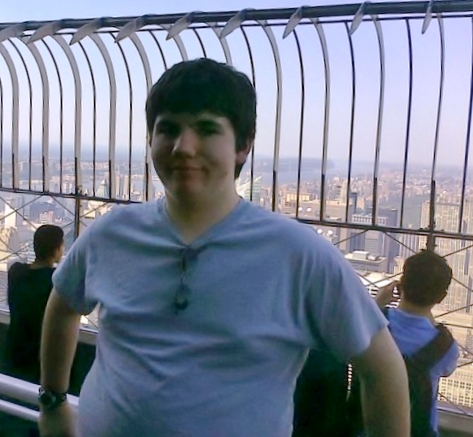 A few days after Tim’s birthday, in July 2010, I took him to the Empire State Building.  I told how it was something I hadn’t done and I knew he would enjoy.  We started out late in the morning of July 28th.  I wanted to be up earlier, but both of us overslept.  We headed up I-95 to the New Jersey Turnpike then the Holland Tunnel into Mid-town Manhattan.  Tim thought it was great driving through the theater district.  He saw again all the places he had visited two months before on a school trip to see In the Heights on Broadway.  We found a parking garage at 46th and Lexington and walked on our way to the Empire State Building.  As we were walking, Tim asked if we could take a few pictures in front of Grand Central Station.  He loved the train station – it was portrayed in several movies and even a couple of Spider-Man Playstation games.  I promised him that we would go there on the way back to the car.

We finally got to Empire State Building.  While waiting in line, I attempted to take as many pictures of Tim as I could, but other tourists and Tim’s shy disposition to be anyone’s way hindered some shots – but I still managed.  We stood in line for the elevator, only to take another until we got to a roped maze for the admission tickets on the 80th floor.  The windows were frosted over and it was a bit annoying, I guess they did it to keep the tourist attraction of the 86th Floor Observation Deck and 102nd Floor Observation for an additional fee.  Tim had gone over to look at a small display of the original King Kong standing atop the skyscraper.  There was even a digital camera kiosk set up so you could appear in a picture with Manhattan in the background from the observation deck…I guess that is for the faint of heart.

Tim made a comment how great it was not to see a Starbucks on the upper floors.  We had passed a dozen or more walking from the garage to the skyscraper.  Once we got to the observation deck, I asked Tim if he wanted to venture to the 102nd floor observation deck, which is really no bigger than a closet.  He didn’t want to, no interest.

“What am I going to see that is different?”

We walked about the inner and outer observation areas taking pictures of the cityscape and each other for about an hour.  We laughed and joked about King Kong, and the amount of power it took to power the lights, air conditioning, and other electric items.  Soon we decided to head back to ground level, and had to pass through the gift shop.  A television played Breakfast at Tiffany’s.  There were overpriced coffee mugs, foam Statue of Liberty crowns, and other tourist items.  At one point I had my back to Tim, and he hit me in the head with a foam Liberty torch.  We clowned around with some of the gag gifts and decided not to buy anything.  Soon we were back on the ground and looking for another part of Manhattan to have an adventure exploring.

Pamela Kruger is now a member of LegacyConnect
4 hours ago
Welcome Them!