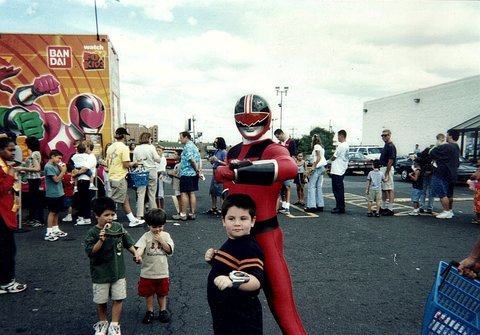 Like most kids, the Power Rangers were a part of my Timmy’s television favorites. It started with the repeats of the original series and the subsequent series. Tim’s toy chest was filled with Power Ranger action figures and Zords, the separate vehicles of each Power Ranger that would combine to giant robot that in the shows would repel the giant monster of the episode. Along with the action figures and vehicles, the Morpher – a device on the show that would transform the teen hero into a Power Ranger; Tim had each one that would light up and make sounds like the one on the show. When I didn’t have to work, I would sit in the kitchen and watch the shows with him.

In the summer of 2000, the show’s producers and studio and Toys R Us had a truck to tour the country to showcase another inception of the show, Power Rangers Time Force. The truck was a mini-movie theater that promised not only 3D viewing but a tactile experience. In addition, the Red Ranger would be there to greet fans and give photo opportunity.

We had missed the truck at our neighborhood store, and found that the next day it would be at the Toys R Us in South Philly from the leaflet in the store. It was during my summer vacation period so having the day off wouldn’t be a problem or interfere.  When we arrived there were people already gathered, a fairly good size crowd of parents and their kids. I was afraid Timmy wouldn’t get an opportunity to meet the Red Ranger, but somehow that didn’t stop my son’s determination. 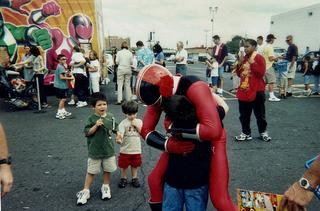 As soon as I parked the car, Tim got out with his mother, pulling and yanking by the hand. Timmy ran right up to the Red Ranger and gave him a hug. Then as the Red Ranger took on different poses, Timmy followed step by step, arm movement for arm movement. My wife and I clicked off numerous pictures of this meeting. I was thrilled my son was happy to meet a hero of his, fictitious or not; Timmy was happy and that is all that mattered to me.