This Thanksgiving, Thursday, November 22, 2012 marks the beginning of the second holiday season without Timmy.  As melancholy as it is without my son, I am grateful for the memories and love I have of my son, as I am grateful for my surviving children.  I am grateful for the support I had received from family and friends during the course of the past eighteen months since Tim’s death; without that support I would have fallen into an abyss which may have been a struggle to climb out of and possibly no escape.  My plans for the day are simple. 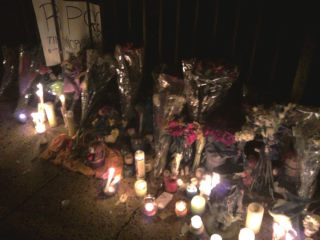 First, stay out of the kitchen.

Second, watch the parade on television as floats, bands, celebrities, and the jolly fat man to run up the steps of the Philadelphia Art Museum to officiate the beginning of the Holiday Season and the countdown to Christmas Day.

Five, sit down to dinner with my family and give thanks over a turkey dinner.

It may not sound like much, the emotions and memories have not come to fruition as I write this entry.  I check my email alerts and I see posts from parents who have lost a child or children.  I see from those posts those who every day is a struggle, because the emotions shred the fabric of his or her person; I also see those that, like myself, know each day is a struggle – but are determined to know that the best way of keeping whole is to live each day and embracing their memories of their child and using it in an attempt to educate those that do not understand that this grief is different from most other feelings of grief and to help those who are among our ranks know they have support and an offer of friendship when it comes to feeling no one else understands the pain they feel.

If I were to say I have my heart on my sleeve, I do.  I wear it in the form of a tattoo in my son’s memory; with ink and flesh I wear with pride and shame in constant conflict.  I don’t care who understands the symbols I had chosen or modified by my tattooist.  I share my stories of my son and this journey I am on which, like any other bereaved parent, can be akin to Dante’s Divine Comedy.  I don’t seek atonement or forgiveness – I simply express the love I have for my son, my children, and thankfulness for the people, especially the kids from Archbishop Ryan and the neighborhood, who each and together as a community, kept the faith alive.  Faith in a future, faith in my place as a parent, and faith in how my Tim saw the world without my cynicism; each time I run into one of these kids or receive a message from them I see how they were affected by the accident and resulting death of Tim.

I look to the past to anchor my thoughts of the future without inhibiting what may come or diminish what it means when it drifts to the past.  There are times when the memories rush in like the waves of the ocean when a hurricane blows inland.  I could choose to let the wave rush over me and become submerged, or swim to the surface aware of its presence and drift with the current of the memory until I reach the shore which is the present.

Over the summer, a friend lost his daughter to Sudden Infant Death Syndrome.  I watched his posts on Facebook or the comments made by other friends of his.  I understood his pain, but to say I knew it would be wrong.  His pain is something only he could feel.  I understood because I knew my pain and I could interpret his expressions and relate them to my own.  It wasn’t that I didn’t know what to say to him, I didn’t want him to feel that I was attempting to overshadow his grief with my own.  A day or two after his daughter’s death, I received a message from him asking if he could talk to me on the phone.  As I feared overshadowing his grief with my own; he feared opening any wound that I may have had dealing with my son’s death.  I told him he could call me, and call me at any time.

I remembered when someone, I never met, did that for me.  It’s when I learned that as grieving parents we do not walk alone.

Mickey Hirsch is someone that reached out; know all too well the pitfalls of being a bereaved parent.  Mickey is a transplanted contractor who lives in New Jersey.  His son died about two years before Timmy due after fighting a strain of H1N1 influenza.  Mickey wrote to me and asked me to call him, I did and I have never forgotten our conversation.

"You may not want to hear this now," Mickey said.  "You will get through this.  You will carry this hole in your heart, but you will survive.  One day you may be saying this to another parent."

Mickey described his son with love and honesty.  Despite all the love that Mickey described and relayed for his son, sadly he was a young man who, in my thoughts, life had jilted; Kevin was born with Down Syndrome.  He worked at the McDonald's at the Franklin Mills Shopping Center.  I remembered Kevin and realized I hadn't seen him in recent months.  Still I remembered him sweeping the floor, doing other tasks in the dining area of the fast food restaurant.  I remembered he always said hello or politely excused himself if he moved a chair to sweep under a vacant table.  Kevin, for fifteen of his twenty-six years, never called out sick – was never late, and took pride in his work.  To me, Kevin did more for his wage than the majority of people in the same employment.

Mickey told me that I will laugh and find some joy again; he told I will feel again.  Now over a year and a half later, although not healed, Mickey had been right.  I don't know who helped him, or supported him; it seemed to be a knowledge that is passed from one grieving parent to another.  For that one hour conversation, I am grateful to Mickey – he was the catalyst that sparked my first steps forward on this journey.

About a week after Timmy's funeral, I started looking for support groups on-line.  Mickey had offered his friendship.  I took up a position on my sofa, staring into the computer screen and started writing about Timmy.  I found Loss of a Child, an online support group founded by Tami Scalise-Halton.  Tami's son Joey died from a motorcycle accident two years before.  Tami, who lives 3000 miles away in the Bay area, was among the first to welcome me.  I read her posts, looked at her pictures of how she celebrates her son's life.  Pictures of Chinese lantern balloons inspired me to do similar for Timmy's birthday with sixteen red balloons and glow sticks.  Eventually we trade jokes, tease each other over personal photographs with another friend or two, tell about our children both in Heaven and surviving with us.  To be honest, if I didn't find Tami I doubt very much I would be able to write.

So in a nutshell this is only a small note of thanks.

Bravo Martin. You are a sign of strength and love and peace. Thanks, David.

Wonderful post Martin!  Also wishing you peace and love this holiday season.  If that is your Thanksgiving table, it is beautiful.  Good idea staying out of the kitchen, mine is in there all the time since he retired and it's too crowded....t hee

Much of what Tami posted goes for me too.  Somehow we are coming out of the darkness and seeing some kind of light.  We laugh with our families and see the beauty in life.  Hugs to you and your family today.  Your little daughters are so adorable.  You will be very busy raising such beautiful girls.

I wish you Peace and Love this Thanksgiving Martin.  It looks like you have many things for which to be thankful.  Thanks for reminding me that maybe I do too -Love and peace,  Ilona

Comment by Tami on November 22, 2012 at 3:35am
Martin, I read this through tears, you are so right about not being alone, somehow it eases the load a little bit when we have someone to help us carry our grief, or let us know that "yes" it is possible to survive, because as you and I both know all to well that it sure doesn't seem like you will. Then I get to the end of your post...I am so honored to have you as a dear friend, I get you Martin! I "Thank You" for putting a smile on my face and making me laugh out loud like a nut sometimes in the most inappropriate places with your wise cracks and jokes. If I could give you a big bear hug I would! Have a peaceful Thanksgiving and know that you are loved!