When Grief and Engagement Intersect 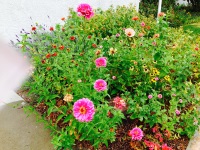 In March, just weeks before my mom died, Greg and I began to discuss a future together. I felt as if we were dancing around the topic a bit, probably because I had been married before and a part of me wanted to make sure it would truly be right, but also knowing that life changes and sometimes you have to go forward into the unknown.

In January, the day after the winter ball for my church, my mom had asked me, "Would the hotel make a nice place for a wedding reception?" She was already thinking I would marry Greg, and this was not her first comment about it. I brushed it off, asking her how I would pay for a wedding. While I thought about being with Greg, I wasn't ready to discuss it.

After Mom's unexpected death, we didn't rush any of our future plans. While things had changed (my mom had been living with me), we knew we had to keep things on the road that they were. When we reached a year together, we discussed, after our big trip together across the country for a month in the summer. Then we could see what was next. We needed more time together to know this was what we both thought it was.

Having worked in the field of grief for nearly half my life, there are things I'm very aware of. One of these is making life decisions in the midst of grief. After my mom died, two other important people in my life also died and I won't lie: This has been a hard time. My energy some days is depleted as I get used to not having these three people around as I did. I can be more cranky and impatient than usual. Some days I am very clear who I am and other days I don't feel like myself.

What I do know is that these are all part of the peaks and valleys of grief. And Greg has weathered them with me. Someone recently said to me what a test a death is to a relationship. Greg has found himself with someone who has lost half her family: both her parents and her sister. But he remains a rock and tolerates my Swiss cheese brain.

We were on this road before Mom died, and little has changed for us in that regard on this journey except for one major aspect: It has made us grow together as we endure one of the biggest tests we might ever face. I'm not saying we've been perfect, but we're doing better than many people I have watched and listened to.

People have told me how much Mom liked Greg, how happy she would be. And I also know that she never wanted to be in the way of any relationship any of her children had. While the happiness of our upcoming wedding is a little matted with sadness that my parents will be there in spirit rather than in physical being, I know that they still are happy for me as Greg and I take our lives together to the next level.

Michelle Linn-Gust, Ph.D. has spent two decades educating people worldwide about coping with loss and change, and has served as president of the American Association of Suicidology. Her first book following her sister's death,Do They Have Bad Days in Heaven? Surviving the Suicide Loss of a Si..., inspired siblings around the world in their survival after a loved one’s suicide. She recently published her eighth book, Conversations with the Water: A Memoir of Cultivating Hope, chronicling her grief journey as she moves forward beyond the suicide and loss field. Learn more about Michelle atwww.inspirebymichelle.com. She invites you to follow her on Twitter @MichelLinnGust. Find her on Facebook as well.

Image courtesy of the author