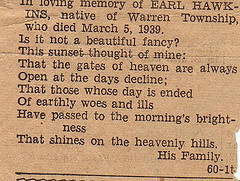 As an avid obit reader (and writer) I like to save these gems to savor and share. Here are some that have recently crossed my radar screen. Each of them, to my eye, paints a small but telling piece of a life – some of them romantic, some humorous, some bordering on tragedy. But all offer a quick but insightful glimpse of a life that will live on in these words. Perhaps they will inspire you if you are at work on your own obit.

All of these obituaries have been publically printed in family-placed death notices in newspapers around the country but because they are just excerpts, small slices of life in death, I have used only initials and ages.

If you have your own favorites, send them on and I’ll try to include them in this space.

She was addicted to The New York Times. Her family joked about her “clipping service” because of the constant stream of articles that regularly arrived by mail to keep the recipients posted about something she knew they were interested in – or that she thought they should know.   JCJ, 85

He was always curious about the world, often taking his family to the darkest and highest hills in Atlanta with a telescope to witness cosmic events…enjoyed reading about a wide range of subjects that ran the gamut from archeology and astronomy to woodworking and model railroads.   JEM, 88

He enjoyed music and was a gifted trumpet player in high school and college. During the Korean War, he was often called on to play Taps for fallen soldiers.        PML, 76

He often said he considered the students his teachers and that he learned more in two years teaching than he did in his entire real estate career.    MJB, 67

The bride and groom celebrated a one-night honeymoon at the Wilcox Inn in Aiken, S.C. before shipping out to England where he was stationed for four years during World War II. Fifty years later, they returned to the Wilcox Inn to celebrate their golden wedding anniversary.   MK, 92

Within a month of 48 years together, his wife died of Hodgkin’s lymphoma. That same year, in October, the spouse of my first love died and we got back together and married in February of 1995. They celebrated 16 years of marriage.   PE, 92

She had a passion for football, rarely missing the high school games her children played.   MWH, 95

She was so full of life you could spot her from a mile away running around town in her bright orange Volkswagen Bug and making friends everywhere she went.   EOG, 62

After the mortgage banking company, Scott could no longer work for anyone else - he had to be the boss. His love for Harleys and choppers led him to open Louisville Performance Motors and he continued that business until he went to the Big House for five years. Once released from the care and custody of the federal government, where he learned the HVAC trade, he recreated his bike shop… Scott was the rock that the people who loved him broke themselves against.     JSDC

Through her work and travel, she fell in love with South Africa and its people, which is what led her to choose it for her honeymoon.     LEK, 40

He regularly left to romp around the arctic conducting ionosphere research and took a break during the international Geophysical Year to skinny dip on the Greenland ice cap.  His great passions involved science and nights spent outdoors under canvas in the rain. One of the crew at the Appalachian Mountain Club, he drove donkeys loaded with supplies to huts into the White Mountains… HWC, 90

Following his honorable discharge, he enrolled at George Washington University where he was a varsity cheerleader. Those who knew him more recently know that he remained a cheerleader to the very end.    OKS, 78

He relished Nutty Bars, low-scoring Braves games, a thick slice of raw onion, a slab of smoked mullet and a well-crafted sermon. He expected promises to be kept and people to be on time. ..He eschewed his hearing aids, gossip, arguing, gum smacking and basketball.   VHW, 86

He was an avid traveler, and one of his favorite sayings was, “Travel is an education you give yourself.”   JKM, 56

He refused to be rushed to create something that he considered substandard. Like most artists, he enjoyed revisiting his handiwork, but he found as much or more satisfaction in remembering how each step along the way contributed to the final product. …He explored his many interests with a childlike enthusiasm, carrying a mechanical pencil wherever he went. While he could be stubborn and headstrong in the service of his art, his twinkling eyes conveyed a warmth and generosity of spirit toward others.    HWW, 74

He always had a great eye for beauty, aesthetics and attention to detail, whether through his love of antiques, design and architecture or endless views of the ocean or layered mountains. Another love was his insatiable passion for food, which often dictated where his global travels took him.    HBM, 74

She also enjoyed her gardens which were a source of great pride and joy. She not only had twin passions for dancing and music but she also had a great desire to learn about different cultures, customs and history through extensive reading and worldwide travel.    JSY, 88