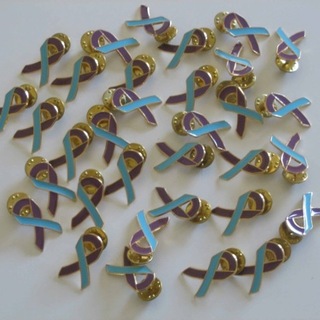 And then it took a moment for me to remember that I was one of two people behind the selection of those colors. The other was Sandy Martin, a mother who lost her son to suicide.

I had been lobbying the state legislature here in New Mexico around suicide prevention funding. It was multicultural day at the capital (the Roundhouse as we call it here) and there were ribbons of every color. I realized that most colors were already claimed by causes, so we would need two to make something unique for suicide. Later Sandy called me while she was waiting for a client to arrive at a house she was showing (in her other life as a realtor). In the ten or so minutes we were on the phone, we decided to use purple and turquoise.

We chose those colors because of their association with healing (turquoise is deemed a healing color by Native Americans and I had heard the same about purple). At first we only used the colors in support of the suicide bereaved but later we branched them out to the entire cause of suicide prevention. I never had a person turn me down when I asked them to wear one of the actual ribbons that LaRita Archibald and I created. As someone said at the American Association of Suicidology conference one year, "I doubt there is anyone in this room who hasn't been affected by suicide."

Eventually two types of pins were made and then wristbands. Last holiday season I saw on Facebook a Christmas tree using only purple and turquoise decorations. We aren't at the place where breast cancer awareness is (in October, pink is everywhere) but slowly and surely we are getting there. After all, slow and steady wins the race. The movement never goes fast enough for me, especially when people are in pain, but I also know that rolling this out in a steady manner will make a more lasting impression as we take it forward.

If you are worried about yourself or a loved one, call the National Suicide Prevention Lifeline at 1-800-273-8255. To learn more about suicide and the warning signs, go to www.suicidology.org.