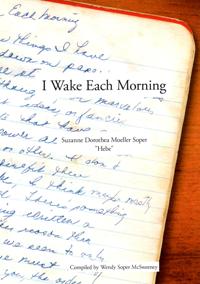 My sister Wendy took the notebook back to Virginia with her, typed the pages in their entirety, and had them printed into small 18-page booklets titled I Wake Each Morning… after the first words our mother had written in the notebook.

I was reminded of this when Elizabeth Edwards died just before Christmas and the media reported endlessly about her “dying letter” to her children.

Edwards’ letter was prompted by her dire breast cancer diagnosis and the 1983 movie Terms of Endearment in which a dying mother writes notes of advice to her children. While Edwards’ “dying letter” has been characterized as a “guide to living,” she herself said, “It’s how you choose who you marry and what to expect from that, how you choose a church…It’s got all that butting-my-nose-into-their-lives-long-after-I’m-gone stuff.”

I Wake Each Morning… is not so much advice-to-children as it is a guide to life, a collection of my mother’s positive outlook and eternally upbeat way of waking up each day with a clean slate.

Here are some excerpts:

“Our lives are relegated by the rising and setting sun – and each new day is a wonder. First, because it is new and fresh and clean and yours. From the moment of waking, you really can make your day – and since you have power over it, make it good.”

“Try a switch in routine: a new route to work, leave five minutes earlier and stop for coffee, speak to someone you may have ignored – it could be interesting – read some item in the paper you would ordinarily skip; do something a little different, maybe even off-beat.”

“Now, again, grab the chance – go, do, participate, accept; don’t deprive yourselves, on trumped up excuses, of an experience…the opportunity or invitation may not come along again.”

Like Edwards, our mother made plans for the Christmas after her death in September. Lanz flannel nightgowns had been ordered for Wendy and me; something special was on hand for Mike. Unlike Edwards, our mother didn’t tell anyone about her notes in the spiral book, so we didn’t have the benefit of her guiding hand during some formative and fateful years. Who knows what, if anything, we might have done differently with her collected thoughts greeting us each day from a desk drawer or bedside table. Now, though, even 40 years later, the book has impact – and not just on us.

As we have shared it with friends – some who knew her and some, as Wendy says in her introduction to the booklet, some who should have – we have been touched and surprised by how much of a mark it leaves. Some have given it as a graduation present or to an aging mother of their own. Overwhelmingly, all have found hope and fortitude that survive long after a loved one is gone. Edwards wrote of that, too.

In the letter read at her funeral by her older daughter Cate, Edwards wrote: “…I have found that in the simple act of living with hope, and in the daily effort to have a positive impact in the world, the days I do have are made all the more meaningful and precious. And for that I am grateful."

Comment by Jessica on January 31, 2011 at 10:21am
Thanks for sharing this story about your mom. She sounds like an amazing, wonderful woman.

Comment by Laurie Ross on January 18, 2011 at 6:14pm
Who do I write the check out for I wake Each Morning?  Legacy.com or Susan Soper?