People Want to Be Helpful, But... 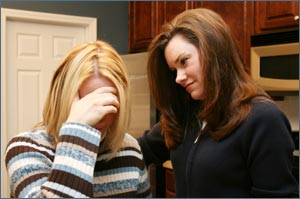 Four months after Claude died, I gave my first dinner party. I worked for days preparing a wonderful menu for eight people with whom he and I had spent many evenings, weekends, and vacations. When the dinner began, I expected that at least one of our friends would suggest a toast to Claude or at least acknowledge in some way his absence.

But I was wrong. Not once during the entire evening did any of the eight mention him. It was as if he had never existed. They probably thought, “She’s having her first dinner, so we won’t say anything to bring the evening down.” But I was so hurt. I felt like standing up and yelling, “How can you just sit there? Claude is dead.” I should have. But I didn’t. During the course of the evening, one man made reference to death in some other context; and I felt a bond with him because at least he had risked mentioning the word. (Excerpt from Seven Choices by Elizabeth Harper Neeld.)

There are two kinds of situations that often occur in the lives of those of us who are grieving.

Some people are so uncomfortable with the experience of death and grieving individuals that they avoid any mention of the loss. I remember when I returned to teach at Texas A&M in the fall after my husband died in July. Greg, like me, had been a professor in the English Department. The first day back, I walked into the mailroom where several colleagues were standing around flipping through their mail and chatting. All of these individuals had worked with Greg and with me for three years, and many had sent me notes when he died. Yet, when I walked into the mailroom, each person there quickly left, one after the other. No one spoke a word to me.

I learned some years later, when I was doing research on grief and loss, that this is not unusual behavior. A lot of people—good people, caring people—are so awkward about what to say when someone dies that they avoid saying anything in case they say the wrong thing. Some researchers suggest this behavior stems from people’s fear of death in general. They want to avoid being reminded about death (perhaps their own vulnerability) so they avoid the subject altogether. Researchers also suggest that some people avoid the subject because they don’t want to make the grieving individual feel worse and they fear that saying anything will hurt rather than help in the situation. Others would say something if they only knew what to say.

Then there are those who say too much. These are the people who attempt to provide comfort by giving a grieving person advice or repeating “words of comfort” or reminding them of “truths.” Someone will almost inevitably say, “Oh, you are strong/young/capable…you will make it.” Someone else says, “There are no accidents; some day all this will make sense to you.” Another opines: “There’s a silver lining to every cloud.” Somebody else asserts that God has a plan and what has happened is part of that plan.

What is best to say?

Something as simple as “I am sorry.”

And what should we do if you are the grieving individual and people share their “truths” with you in a way that doesn’t help? Best, I think, to understand that they mean well but to remind oneself that you aren’t weak or faithless because you can’t see it the same way or don’t find comfort in what these people are saying.

And what about those people who don’t say anything? Again, it helps to remember that this is typical behavior for many people in our society. Such behavior usually isn’t personal.

• What Not to Say

• Making Amends for Something You Said

• How You Can Help Someone Who Is Grieving

• Do Men Grieve Differently from Women?

• How Long Is This Grieving Going to Last?

• The Little Things We Do Make Us Stronger

- she is committed to work that helps lift the human spirit.