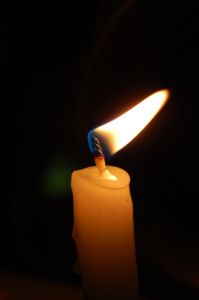 There are few people whose lives have not been touched by suicide. The first time I conducted a memorial for a person who chose death, I became aware of how important it is to name the circumstances of suicide and make space for the feelings that accompany that. I did not know the woman who chose to die, and I did not know any of her family. They had received my name from someone at the funeral home.

Jodie was a physician in her 40s – a bright, successful woman who had mothered two children and appeared to have everything to live for. Twice married and twice divorced, she lived alone.

I spent several hours with her family – or I should say families. After speaking with her former husband, it was clear that I needed to meet separately with her children (from her first marriage). A third group consisted of some other relatives who wanted their own session as well. After about six hours of conversation, I felt I had become acquainted with Jodie – so well, in fact, that after the service, several of her friends and relatives asked how long I had known her. They were astounded that we had never met. The fact was, I had gotten to know this woman because the nature of her death required more of me. It required more of all of us.

Included in my opening remarks, I offered some statements about Jodie’s choice and made room for some of the feelings it evoked.

We come into this time with a range of emotions as deep and complex as the woman we are remembering.
Here there is love – and the searing pain of separation.
Here there is anger – and the futile search to understand why Jodie could not weather the despair that locked her alone into her self.
Here there are questions – why, mostly. Why?
Some of you come feeling bruised by this death and asking what you could have done to prevent it.
Jodie’s choice to die touches the despair that courts many of us in our own moments of loneliness and threatens the structures of meaning that affirm our own lives. Let us remember that no single act of desperation can define a life. No matter how stalked by pain, Jodie’s life also had its moments of delight and happiness, caring and friendship, sharing and love. Death by choice is not a denial of life; it is the cry of despair for more life. It grows from a deep personal alienation or profound suffering and is carried out alone, after a struggle within the self.
When a death such as this cuts across life in its fullness, we are left with a certain incompleteness. We know that Jodie leaves much unfinished, unfulfilled, unsaid. There are still other things you wanted to share with her, and she with you: Graduations, weddings, the birth of grandchildren; another walk on the beach at sunset with Justin, another shopping spree with Ellen, another bridge game with the club. This sadness for the loss of this life, full and blossoming, mingles with the sadness for the loss of possibilities not realized.

The effect of my having said these things was remarkably liberating for those who gathered. There is something heavy and burdensome about entertaining a room where everyone is thinking about something but it is never spoken. The power of the unmentionable subject to tinge both the living and the dead with a subtle shame is defused when it can be named.

It was several years later that I would experience these same issues from the perspective of the bereaved instead of the minister. It was at the memorial service for my stepson, who chose to end his life at the age of 28. I had known and loved him for 27 of those years.

I spoke with Tom on the last day of his life, only minutes before I rushed off to the airport to catch a plane for a conference on the Caribbean island of St. John. By the time my husband, Chuck, was able to reach me (it was a very long and circuitous trip adapted to routes available on frequent-flier credits), Tom had been dead for 24 hours. By the time I was able to arrange another flight back to North Carolina, where Tom and his wife lived, the minister, Janet Harvey, had already met with the rest of the family. She requested time to meet with me alone, which was very helpful, but I went to the service with a sense of being a little on the outside of things. (I was perhaps more sensitive to this exclusion because I was a stepparent.)

By the time the minister had offered her opening remarks, however, I felt that she had opened a circle to hold my feelings as well as those of Tom’s birth parents and his wife. All of us were relieved that she could name Tom’s choice with respect for his human struggle and also with understanding for our difficulty accepting the finality of his actions. After her initial greeting, she said, “We gather to honor Tom’s memory and to support one another in grieving a death that is the hardest death to grieve: death that is chosen.”

She offered a prayer and then said:

On Sunday morning, Tom completed a decision. Where there is pain and confusion, despair and doubt, we long for the end to suffering. For some, like Tom, life no longer has any choices but one. Life left scars that Tom could not find the inner resources to heal. The inner pain was too great – pain that he had contained within himself for years, pain that often lashed out in anger, mostly at himself. Tom chose to end the suffering for himself. The mind was exhausted, the heart frightened, and the end taken. The suffering does not end, however, for those who have loved and cared for him. Friends and family are left with feelings of shock, betrayal, anger, sadness, and – in time – compassion and forgiveness. Those who are left ask and continue to ask, “What could I have done? Why didn’t I see it?”
No one knows. And nothing will bring him back.
No one is responsible for Tom’s choice but Tom.

Related articles:
• What Do I Do Now?
• What is a Memorial Service?
• Running Through the Pain
• Sudden Death

Also by Sarah York:
• Giving Sorrow Words
• Creating a Caring Space through Prayer
• The Seasons of Grief
• When an Infant Dies
• When a Teenager Dies

Very kind and sympathetic article.  Thank you for helping people see another side of suicide.  This is a hard subject to talk about, but you did it well.

Comment by Margo powell on September 25, 2011 at 11:22pm
Enjoyed your article. very insightful!
God bless you to keep up the good work.
Margo Powell

Carol Succarotte Daniels is now a member of LegacyConnect
8 hours ago
Welcome Them!