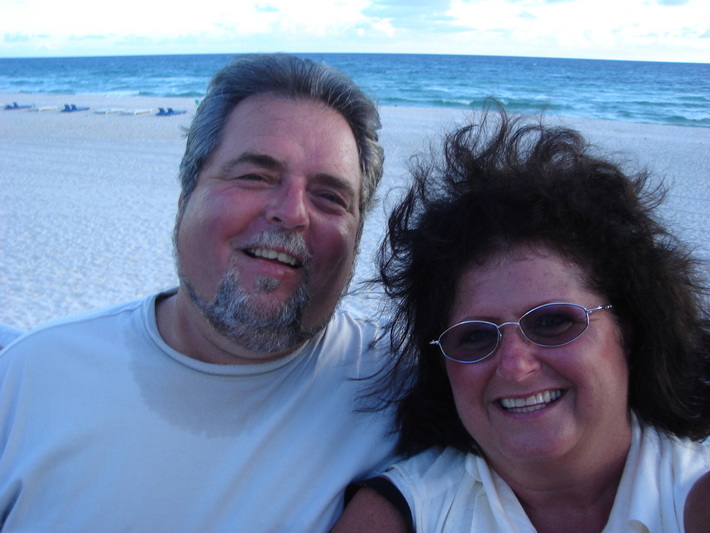 Dear Cindy, I was just reading your post to Christy, and I wanted to say how much I feel in common with you.  While I am healthy (thank you God), my husband Jack was not at all.  He was a 'brittle diabetic' for most of our married life and that in itself created so many problems.   He had so many episodes where he passed out, severe nerve damage (he couldn't feel his feet any more)..it is so heartwrenching.  He had also fell and fractured his back, so was off work for 2 years and had major surgeries as you talk about Cindy.  In fact 4 surgeries for his back and 1 year in rehab.  His doctor said he was amazed he could actually walk again, but Jack was a stubborn strong man with fortitude I have never seen.  The one thing he was so stubborn about though was his smoking and he couldn't stop, no, not at all.  We begged him, but it was a self fulfilling prophesy, and we found out at 56 that he had life threatening cancer of colon/appendix.   He left us at 57 after a valiant struggle.   We had many talks about death and loss and the future, and I am sorry you were not able to have that with your husband.  The words we exchanged at least gave us some sense of comfort at the end.   Jack too, he wouldn't say anything to me about his level of pain, to the kids though he would and then he would say "don't tell your mom  how much pain I am in, she can't take it" and he would pretend.  He wanted life as normal as possible, every day a struggle.  In his honor I try to be strong and stand up straight, as my mom would say....:)  Each day I get up knowing that he loves me so much and I love him, and it carries me through the day.

I hope you find peace and the knowing your husband Jermone is not suffering through the pain and the hurts but is still within your heart and supporting you through your days.

Cindy, I understand how you feel. We can't help but wonder "IF".... So many questions and maybe some regrets, but for me at least, it's not about that. Like you said there was a time years ago when your husband could've been killed but you were blessed with years that secured your committment to each other. You shared in caring for one another. That is real love and some people NEVER experience that. My husband had an accident 4 yrs. before that could've killed him, but he came out fine. We were also blessed.

I think for me that this is a lesson in faith, obedience and perseverance. I am reminded daily of the children's song "Yes, Jesus loves me....I am weak, but He is strong."

I am sad to hear you have MS; I know that's just one more thing that makes losing him harder on you. I can't imagine. I never knew anything about MS until 4 months ago & since then I have met 3 other people who have it. One friend here on Legacy, Margarita, was diagnosed recently. I was told by one of them to take good care of myself because she actually was 1st struck paralyzed w/ it after the granddaughter she had been caring for many years died from her illness. Of course Margarita here, also was grieving when it happened. It seems quite scarey to me to know so many people are effected & I never even knew about it. You remain in my prayers.  Sorry for rambling.. Christy

Kathleen Franck said…
Cindy, Good to hear from you. 6 months is like yesterday. You are barely into this...I am so sorry! I too had so many things to do after Wade left...the sewer had to be put in 2 months after Wade left. My Brother-in-law stepped in and did the contractor part of it but still very expensive $9400. to the city. Whew Too much But I couldn't think of digging up the septic tank every 2 years....Then the following May Our roof began to leak so I had to make the decision to get rid of the tile roof and have a brand new roof put on in late July. (My daughters fiance' did it for us at a fraction of the price.) Yes God has been good but I have been keeping busy. I painted the outside of the house and started on the inside. I think I was being a bit OCD but it helped me have a purpose to get up in the AM. So many big decisions when I had never made those before!
I am facing a new time in my life right now because my last ( "child" at 28) moved out the last week of June. I have not had the luxury of grieving alone for the entire two years Wade has been gone. I Know God had it in his control. My kids (all three living with me) were all here for me at a time when I think I may have curled up and died. Wade was my everything! I see a future right now though I am still devastated with being abandoned.
I am so sorry to hear about your MS. I know how debilitating that disease can be. I'm so glad you have people in your life to help you! How old are your kids? Mine are 25, 28 and 30. Yeah we started young. I'm 52. Too young to be where I am. It sounds like you are too. You can't fit an entire life into an e-mail. If you want to e-mail me with no space constraints my e-mail is kfrancklady@hotmail.com .... The lessons I have learned in the last 3 years could fill a book. My goal is eternity. In a life that all goes right. It's so very difficult to keep ones perspective. I too feel that we have much in common. I pray the Lord will give us direction in our conversation so that we wil

Cindy, I offer you my prayers and best wishes. I feel as you and many others here feel about losing the one who made life worth living. My husband was suddenly gone almost a year ago from a work incident- I don't say accident, because it was neglect that killed my 38 yr. od, healthy, optimistic, soul mate. I don't know how I have managed to exist for almost a yr. without him. We were constant companions & lived & worked together for 8 yrs. Life was great. He accepted a new job 6 months prior to his death that would advance his career... I could barely stand being without him during the work day for those 6 mos. but now I see that was God's way of preparing me to be without him now. So many things that show me God is at work. It hurts so bad, but God reminds me that Larry is great and me & the kids, granddaughter are fine. My church family has really embraced me & I have found new friends through this. I wish you well and try to stay focused on the moment or day, and don't look to far into the future because it causes undue stress. P.S. Cry without shame & don't let others who have not experienced this themself tell you how you should feel! Hugs~ Christy

Hi Cindy I wrote you an e-mail but it seems like it is not working. I won't give you all my back ground so I can fit my message in. I have said your very words. Who am I? I was a great wife and mother. I stayed at home with our kids. Pretty much I was Wades other half. I too didn't mind. Until he left and left me with an empty life. I knew that my search for "Kathleen" couldn't happen until I was on my own. When Wade left it shook my very foundations of faith. I had expected God to heal him. I felt that I had been ripped in half....Then I felt God tell me that I needed to find who I was. I would have happily lived as Wades wife but God had other plans.
Just in the last couple of months I can sense a change in my out look. Yes I'm still sad and I miss Wade horribly but I must "Do Life". I wish I had an answer for you on what to do. All you can do is put one foot in front of the other and pray for guidance. My drive has been to get my house in order and it seems like that is a silly goal but I feel as I start this process I will discover my purpose. Another thing that I have discovered is I am a blend of Wade and I even if he is not here physically. That is a gift that we have been given by God. All the good and wonderful aspects of our husbands we hold in our heart. I know it's not what we want we want our husbands but as you said we know where they are and they are waiting for us. I thank God daily for Wade for his provision through Wade. I do have my little stubborn shoots of anger wanting Wade back but I know that we see through a glass darkly and we do not know what is is that the Lord has prepared for us. I must trust. I don't know how long you have been a widow (I hate that word) but truly God does have us in his hands. I pray Lord God that you would show Cindy the first step. Comfort her, put your arms around her and reassure that you have not forgotten us. Blessings to you Hugs from me too. Kathleen