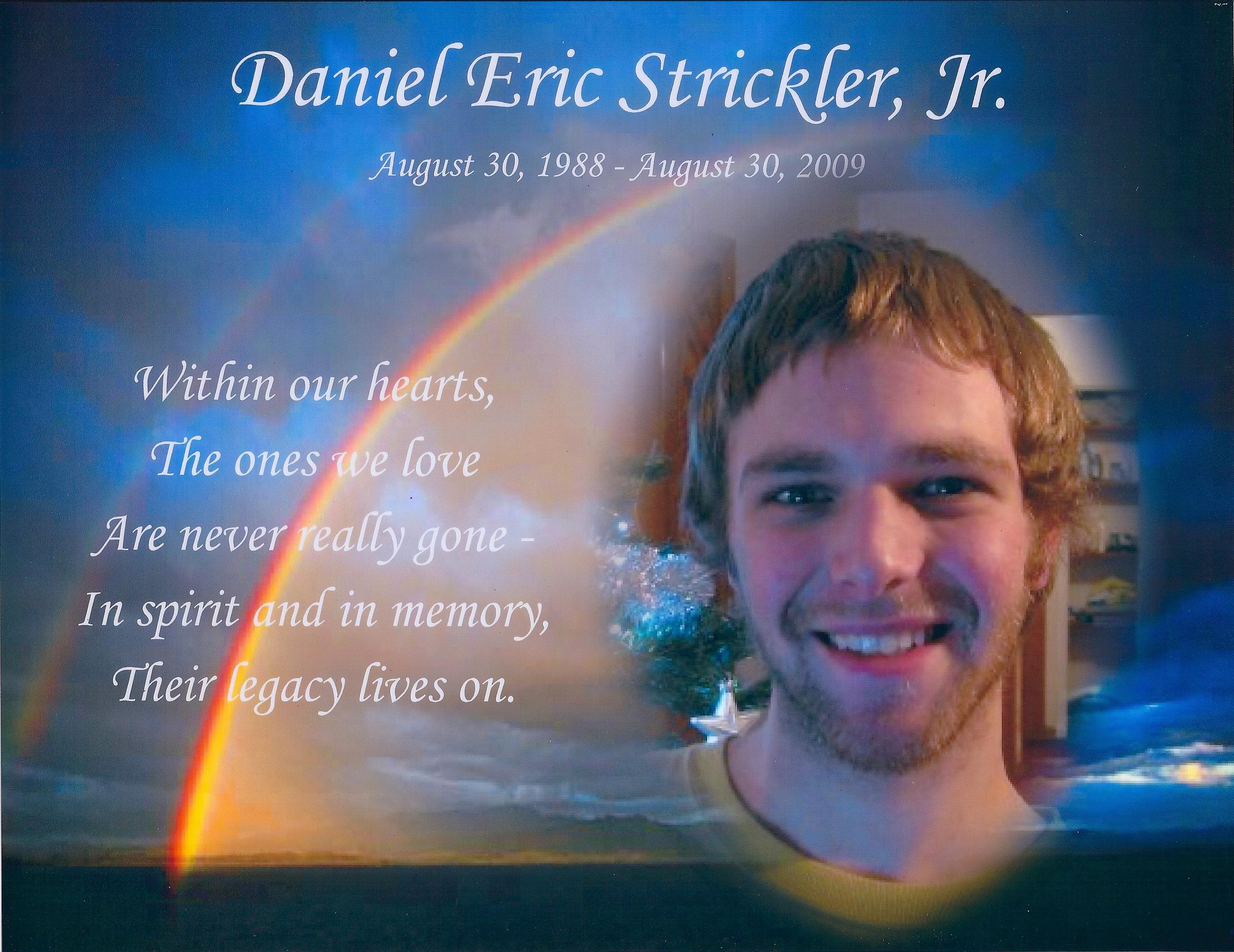 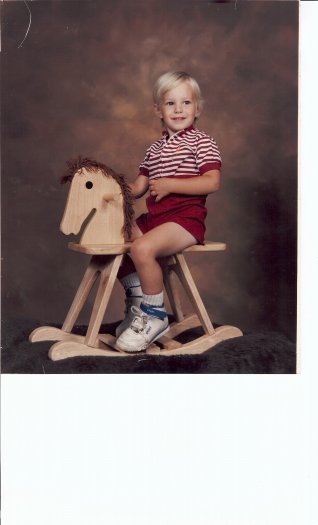 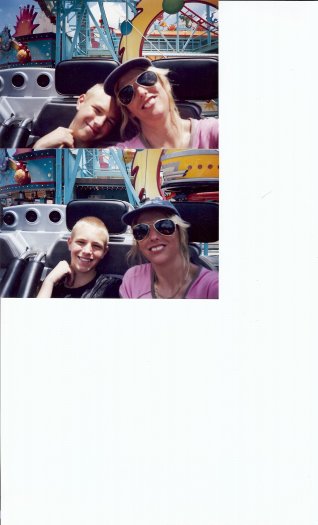 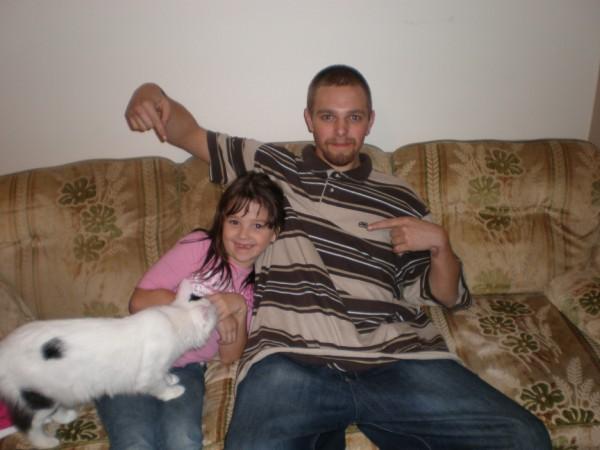 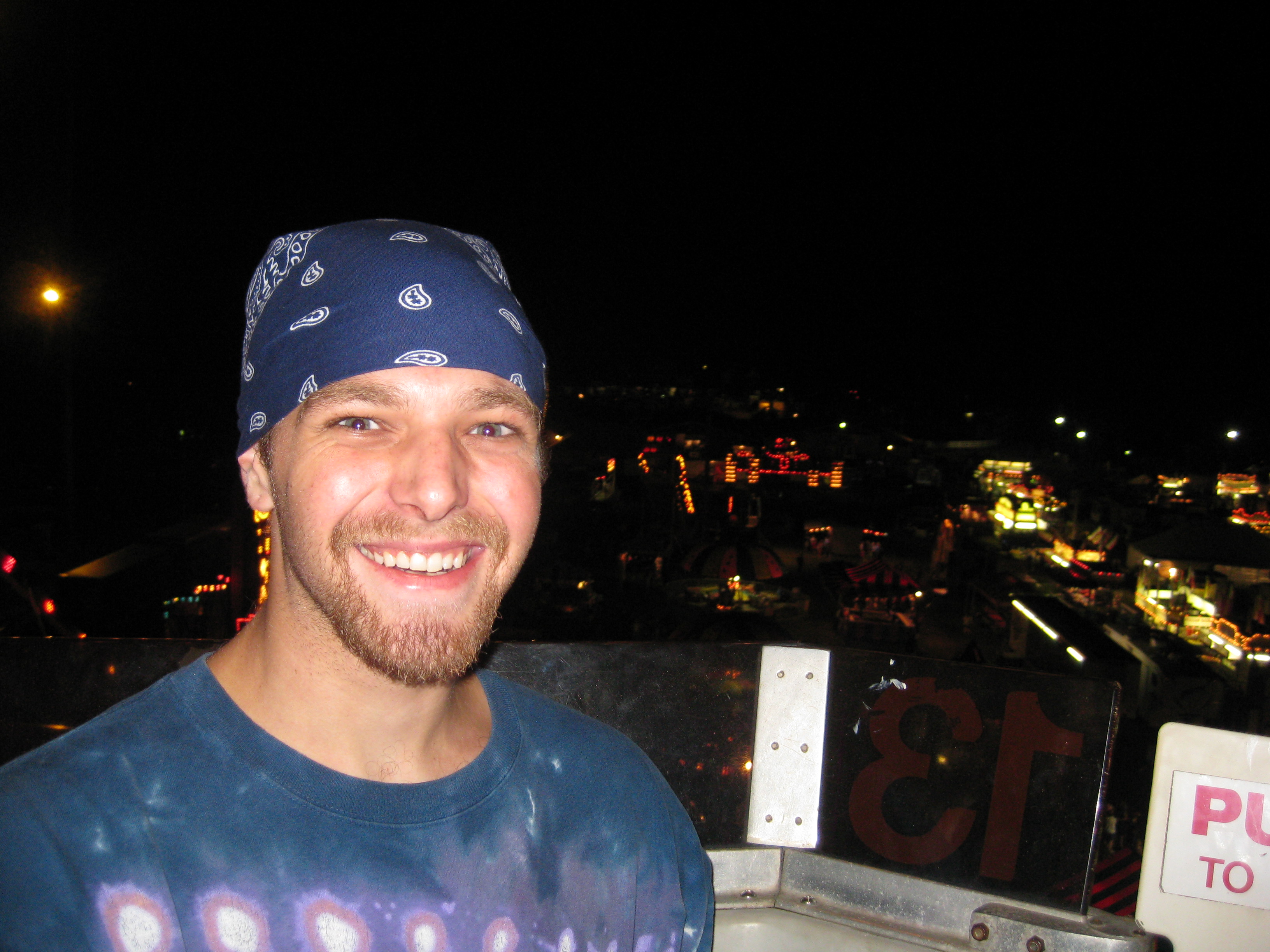 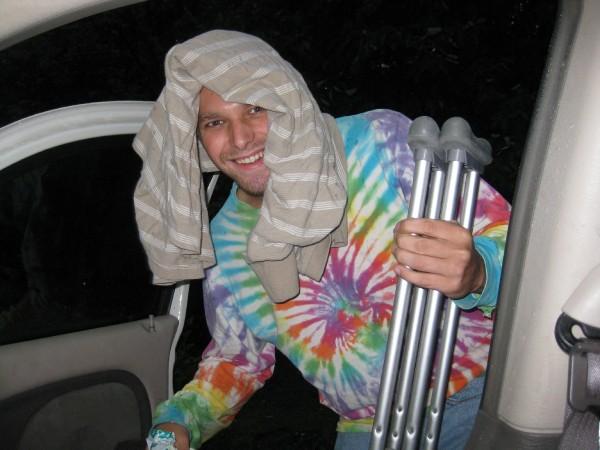 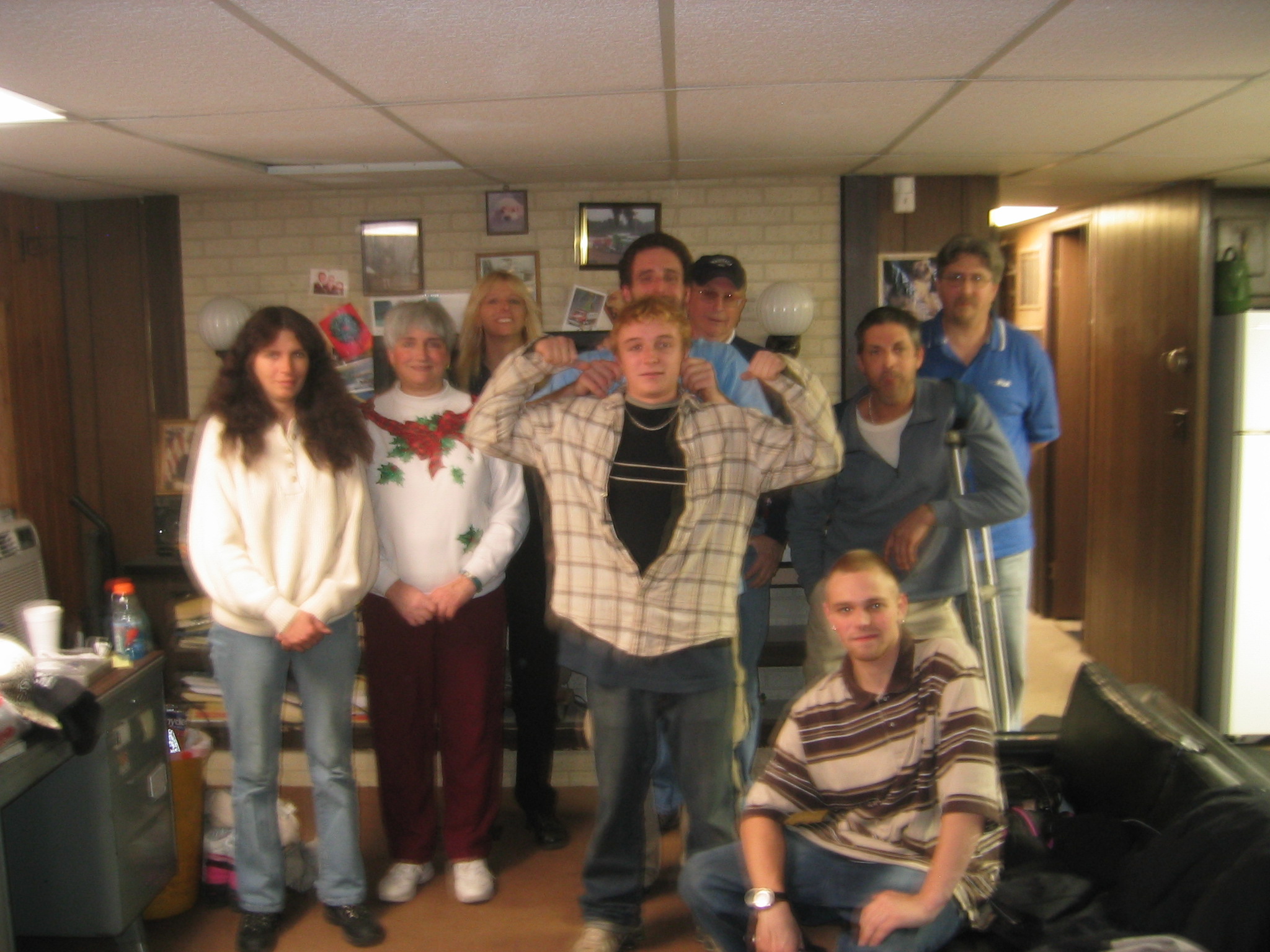 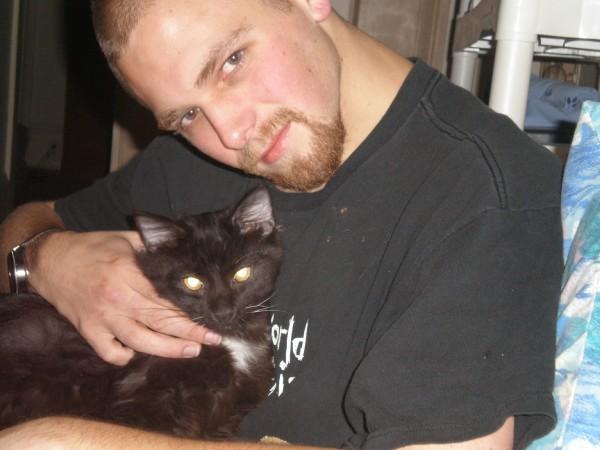 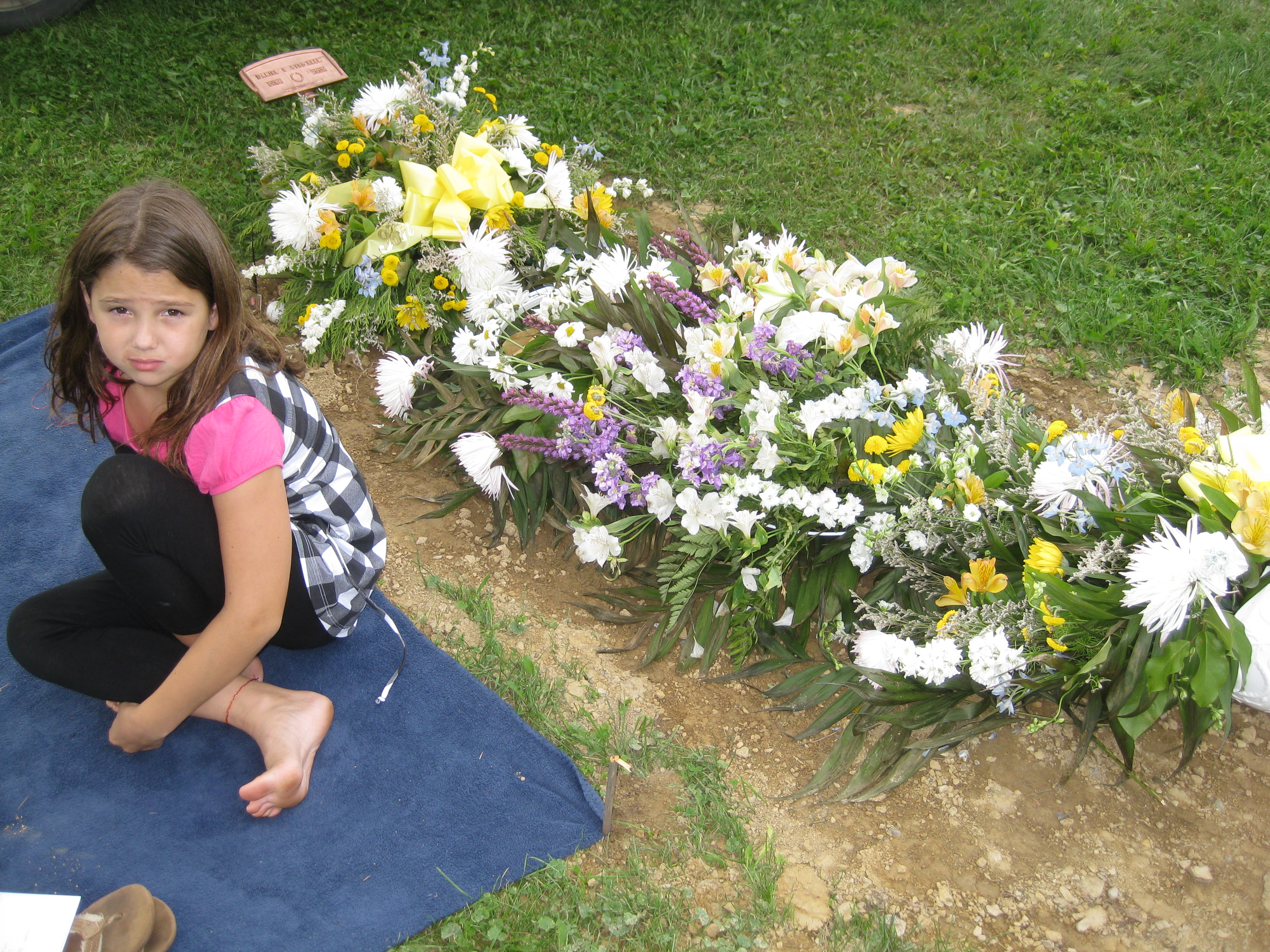 I lost My Son Danny on his 21st Birthday Aug. 30th 2009. My Sons father out of 100 times that he "promised" to do something with my son only came through on maybe 3 or 4 of those "promises". My Dad called Danny's Dad to make sure that he didn't blow Danny off for his 21st Birthday. On Aug. 30th 2009 My Sons Father Dan and his Dads GF Joyce took My Son Danny to a bar for Dannys 21st Birthday. Through My investagator and the Police Report I have learned that while at the bar My son had became intoxicated and his Father claims that it was him that shut My son off and not the bar. They stated that he was drinking Long Island Ice Teas (approx. 5 shots a piece) and "Double" shots of ????? Then My son lost a contact lens and was finally shut off. Danny would not ride with his Dad and his Dads GF back to thier house which according to mapping sites is 4 mins. away so a bar patron gave Danny a ride to his Dads house where Danny had told me earlier that evening that he was staying at his Dads that night since they are going to be drinking. When Danny got to his Dads from the bar I was told that he got out of the car and went straight to the ground. Dannys Dad and his Dads GF Joyce pulled in approx. 5 mins later and said that Danny was laying in the yard with no shrit on and instead of taking him in the house and making sure that he was going to be Ok they decided to bring him to see me but Never told me that they were coming and I live approx 35 mins. away. They started driving up Interstate I-79. According to the Police report Dannys Dad and his Dads GF that night stated that Danny and his Dad got into an Arugment and they stated that his Dad Dan SR. "Kicked him out of the car" his GF Joyce was driving and she went ahead and pulled over and they left My Son Danny out of the car along the Interstate Highway (2 fences and 4 lanes of cars going 70 MPH) 2 miles from the Portersville Exit. How could they do that after just picking him up off of the ground??? The lab results came back and his BAC was in the Top two that the women at the coroners office Ever seen at .359, he had no cell phone and it was approx. 10:45 PM on a Cold Dark Night (on his Birthday of All days). Both his Dad and His Dads GF then got off of the Interstate at the Portersville Exit (where they "could" and "should" have left him safely only 2 mins. later and called me to pick him up if they didn't care about his saftey enough to take him the rest of the way) and then they returned to the Bar where they continued Drinking until they received a call from the Pennsylvania State Police saying that My Son Danny was Hit and Killed by a car going 69 MPH on the Interstate Highway where "They" had left him. The drivers statement was taken at the seane and he stated that he had just set his Cruise Control to 69 MPH and looked down to change his radio and that he was "probley" in the right lane. When he looked up there was a man standing there with his hands in front of him like "don't hit me" but the driver stated that he had No time to react by braking or swerving to avoid hitting My Danny. Danny went straight through the windshield of the car and when the driver did brake My Son was then thrown back out of the car to where he landed back on the Concrete and died on the side of the Interstate Highway. With My Sons BAC at .359 I would have had to take My Son Danny immedatly to the hospital for detox and still may have lost him. I read where a women on here lost her 18 year old Daughter at the hospital with a .30 BAC. Danny's Dads GF has always been a Bit&h but I couldn't belive that because I asked her who was driving and she said that it was her and that "doen't matter" I told her that it is Going to matter and while I was 10 mins. into the first viewing for My son she had the Police call me and tell me that she wanted Harrasment charges againt me and a police escort to the Funeral. WHAT????? The officer told me that he had No Intention on doing that but to please be civil (which I would Never disrupt My Son Funeral - not even because of the careless Bit%h that left him for dead) I also searched her name to get thier address so I could send them the bill for half of the headstone and found that she has a Facebook page - without being "one of her friends" I was only able to the one photo that they have displyed for anyone to see and the photo is My sons Dad and his Dads GF from 2006 with Joyces Birthday Cake in front of her and they both have the biggest smiles on thier faces. How could they keep that photo up after what happened to My Son Danny while in there care on his Birthday. I Miss Danny so Much!! His Birthday is going to be a Nightmare for me. I am going to have to to deal with it being the day that I gave him life and the Day that do to his own Fathers Negligence he is Gone. I do feel alone in this Whole Worst Nightmare and My family is not supportive at All. I Will Love Danny Forever and a Day - I Miss Him so Much!! My Heart goes out to Everyone of you that are suffering from the loss of a child. ((((((HUGS))))))

Your son looks like a very fine young man that anyone would be proud to call " son ". I feel your pain ... I think we all do. Bless you!

Mary Ellen said…
SO SORRY FOR YOUR LOSS OF YOUR SON, I MYSELF LOST MY YOUNGEST SON JOHN 36 CAME HOME FROM WORK AT 4 SAID TO HIS WIFE I'M FEELING LITE HEADED WENT NEXT DOOR TO HIS MOTHER INLAWS AND SHE WWENT TO TAKE HIS BLOOD PRESSURE MY JON FEEL OVER AND WAS GONE ,HE WAS OUR BABY THAT HAPPENDED JAN 14TH 2009 AND THE THIS APRIL 30TH MY HUSBAND OF 37YRS PASSED AWAY AT HOME W/ HOSPICE HELPING WE WERE BOTH STILL GRIVING FOR OUR SON AND NOW I'VE LOST THE LOVE OF MY LIFE I HOPE YOUR DAYS GET BETTER FOR YOU I CAN ONLY SAY SOME DAYS FOR ME ARE BETTER THAN OTHER DAYS HUGS TO YOU MARY ELLEN

Chelle said…
Dear miss Cindy, i am so very sorry for your loss and the horrible events after that you had to go through, no one should be put through that. I can't imagine the feelings and emotions that you must have right now. Know that Jehovah God is aware of your pain. Death is not a natural occurrence, it is only because of the sin of Adam in Eve "that death was brought into the world" Romans 5:12, but do trust and have faith that you will see your son again just as Jesus resurrected many while he was on Earth there will be a time when "all those in the memorial tombs will hear his voice, and come out" John 5:28 and when this happens the bible promises in Revelation 21:3,4 that death will be no more, nor pain nor mourning nor outcry" You and i will see our dead loved ones again! Miss Cindy pray, "for Jehovah is hearer of prayers" Psalm 65:2 ...and i will keep you in my prayers. and i hope that this has comforted you in at least a little.

Nilsa Edgar said…
I know he is the driver of that jeep because his girlfriend is telling everyone it was him behind the wheel.i hate what he putting me thru and i hate how she died.She only lived 2 sec and every bone in her body was crushed.Did he help her no !!! he left her there to died. She was 29 yr old and had 4 kids that she will never see again, because of what ottoway harrison did to my baby girl. That why I know what you are going thru Cindy because i in the same boat that you are in i want justice for your son and for my daughter .

Nilsa Edgar said…
I just want to say for your lost and as well i lost my daughter to a drunk driver she was returning back home from visiting her boyfriend in rehap when a jeep without his headlight off and drunk and on drug hit my daughter killing her and her mother in law and injurting a 13 yr old in her back seat. And to top that he said he was the driver of the jeep that killed my daughter.now its been 5 month and no one charge on this case because they are waiting for dna that was taken from the jeep to see who was the driver. i kn

valerie moore said…
cindy, what a beautiful young man. my prayers are with you. my son,dusty passed 2 days before your danny. i am agonozing over the 1 yr anniv approaching. i sympothize with all of us loving mothers who have lost their precious sons. val

Randolph L. Schrader said…
Cindy, David and I postings were not meant for You. They were directed to the Topic started by Tom. I'm sorry that you thought the remarks that were coming in was directed to you. You posted just in time to hear the backlash from us commenting on Toms posting. Again I am so sorry for your loss. The statements being made are for Tom. Hugs to you. Hugs are good.

Garry said…
Cindy, Just got your email. We had a somewhat similar case near Chicago a couple years back and I want to tell you how that unfolded . Please email me on this site and I can personally send you my personal email or phone number so we can talk about it. My prayers for your peace, Garry.