What not to say after a miscarriage

What is it about a miscarriage that makes it so difficult to say the right thing? Women who miscarry report that they’re frequently the target of callous and hurtful comments that dismiss or trivialize their loss. While the list of offenders includes friends, colleagues, and medical professionals, the worst culprits might surprise you; often family members, especially their own moms, mothers-in-law, sisters, and sisters-in-law.

Death of a Loved One: Coping with the Anniversary

For me, the anniversary date of the death of my late husband was never as bad as I thought it was going to be. Early on, each year, it would be the couple of weeks that led up to the anniversary that always knocked… Continue

Jen, I feel like I'm slipping backwards. Just having such a hard time and still don't want to accept that I will never talk or hug you again. I am trying really, really hard....but I need your help. If you can give me just half of the strength and courage you have I know I can do it. Things just don't seem right with you not here. I still get that confused and lost feeling like I don't no where I belong now. I just don't know what to do. I miss you so much. People say it gets easier but it… Continue

Missing you
Jen...sometimes I feel like I'm not all here, part of me is missing and I know it is half of my heart that can never be replaced. I only hope you know how much I love you and how much I miss you. And I really hope that you forgive me for not being home when I should have been. I know you called many times, it was New Year's eve and we always wished each other a Happy New Years Eve, I just wish they would have called me to the phone. But I did get to talk to you on the way home,… Continue

This is a quote my daughter, Julie, found and sent to me. She is right about this possibly helping us.

Time does restore to us our quiet joy in the spiritual presence of those we love, so that we learn to remember without pain, and to speak without choking up with tears;
But all our lives we will be subject to sudden small reminders which will bring all the old loss back, overwhelmingly.
Elisabeth Watson

Hello! My husband passed about 7 months ago from Pancreatic Cancer. He endured surgery and treatment for about 17 months before it took his life. I now have beautiful twin grand-daughters born 3 weeks after he died. But I still have times that I am so sad and I miss him so much! We were married for 29 years. I could use someone to talk to once in a while who understands. Most of my friends are couples, so they can't fully understand. I seek out singles at church also. Anyone out there like to… Continue 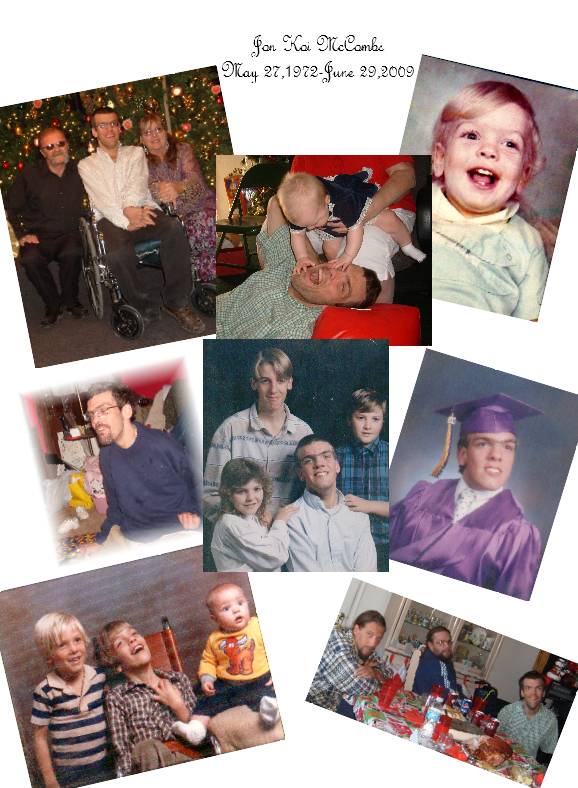 Jon came into this world with trama. He was stuck in the birth canal where his left lung collapsed and his heart stopped for 4 minutes, causing him to have Cerebral Palsy. Through all the limitations that his lack of motor skills presented, he was a true overcomer! Determined to make the best of life, he touched so many lives with his smile and his wonderful sense of humor. He made everyone who met him, re-think impatience.
He was a very… Continue

I will be posting the date, time and place where Phil's memorial will be. Please check weekly.

For info about what happened to Phil, please visit:

For more info please contact me through the blog. Thank you. - Isabella

I miss my loved ones...Does anybody else miss them too...

Felix M. Bolognese, died 7 yrs ago, Janine Donnelly,my best friend, uncle mike and Kenny, Aunt Cathy, Grandma Evelyn, Both grandfathers Joe Bolognese, and Edward Ayres, Cousins First Richie Natiello, like my big brother, little mikey bolognese and of course Heather Ayres Noonan, and my stepdad Louie Catanese, Uncle John, and Aunt Josie...... and anyone else I forgot where are you? will I see you again? I love you all....

We lost our Mom Thanksgiving morning "00. She was diagnosed with a rare disease when I was young. Things got very complicated for her as the years went on. Prednisone effects gave her Diabetes. She had kidney failure. The final blow was a fall and she fractured her back. Living on a fixed income is enough to drag anyone down. She could not take anymore. She lost the fight. The nurses @ Hunterton Medical Center,NJ were VERY good to us. I was so broken with the loss of our Mom. They let us stay… Continue

How to make memorial donations

We honor the deceased by making donations in their memory. Many obituaries designate a charity or fund selected by the family, but what if the organization is one you’d prefer not to support or worse, in conflict with your values? Do you donate anyway or ignore the family’s request, making a donation to a charity or cause you support? And what if there is no indication of where to donate? How do you choose something appropriate?

Ask yourself, "Why am I making the donation?" Is it to…

My mother died on September 12, 2009. I was with her everyday for the past 6 months when it all started with outpatient surgery... up to the second she took her last breath. Before she started sleeping nonstop, we held hands and just stared at each other. I slept by her side holding her hand. I saved her life 3 times over Doctor oversight, but she could no longer keep on fighting. At the end she was so tired, and asked that I let her go. I finally told her I would be OK, and she could go. She… Continue

I'm new on this blog and not really sure where to start. Yesterday would have been my son's 38th birthday. I miss him so much. Most people are so uncomfortable talking about him and don't even mention his birthday. I was very depressed yesterday. It will be five years in November. I believe I never really allowed myself to grieve. I used meds and food no numb out and now I'm doing it without the use of any previous things I used to numb out. I hate the pain that I feel. His death was very… Continue

I am missing you each and everyday. You were my world, my everything. I wish that you would have taken my hand when I reached for you. I never stopped loving or caring for you. My heart will never heal as it has been taken from me. My tears I shed everyday are for you and what we once had.

I pray that you are at peace.

You've watched over me since you passed and I've noticed. I seen the butterfly two days after you left and I know you are okay. You guided the police to the… Continue

LOSS OF MY DAUGHTER AND BEST FRIEND

OCTOBER 13, 2002 MY DAUGHTER DAWN (26 YEARS OLD)WAS MURDERED BY AN EX-BOYFRIEND. HE ALSO TRIED TO SHOOT HER BABY WHO WAS TWO YEARS OLD, BUT FAILED "THANK GOD". I AM NO FURTHER AHEAD IN DEALING WITH HER DEATH THAN I WAS ON DAY 1. MY LIFE PRETTY MUCH ENDED THAT DAY. I KNOW I'M NOT ,BUT I FEEL UNIQUE, IN THAT NO ONE CAN POSSIBLY FEEL THE WAY I DO ABOUT MY LOSS. I LOST MY BEST FRIEND, CHILD, MY WHOLE BEING. AND I CAN'T MOVE ON. I HAVE ANOTHER DAUGHTER 6 YEARS YOUNGER THAN DAWN WHOM I LOVE VERY… Continue