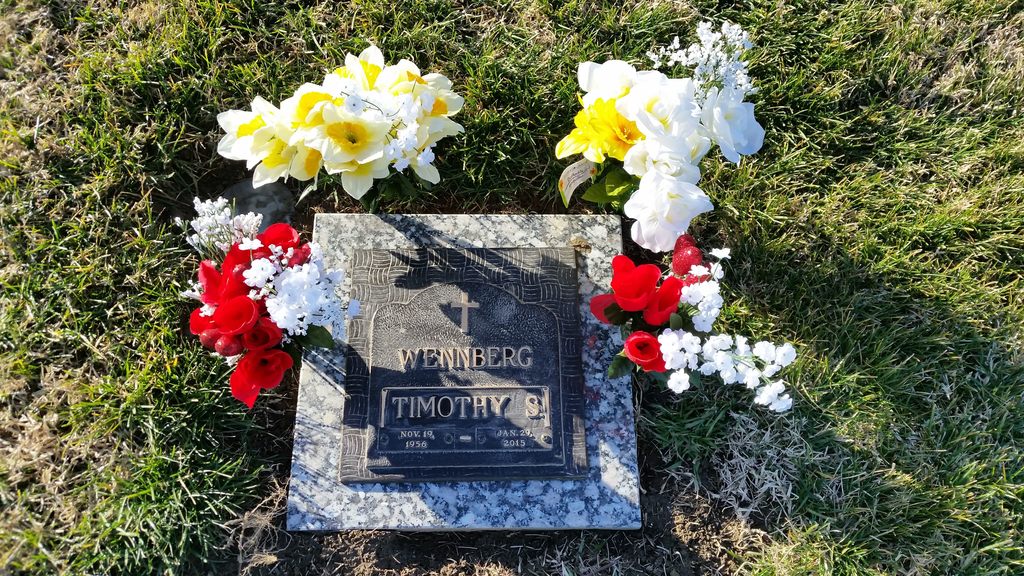 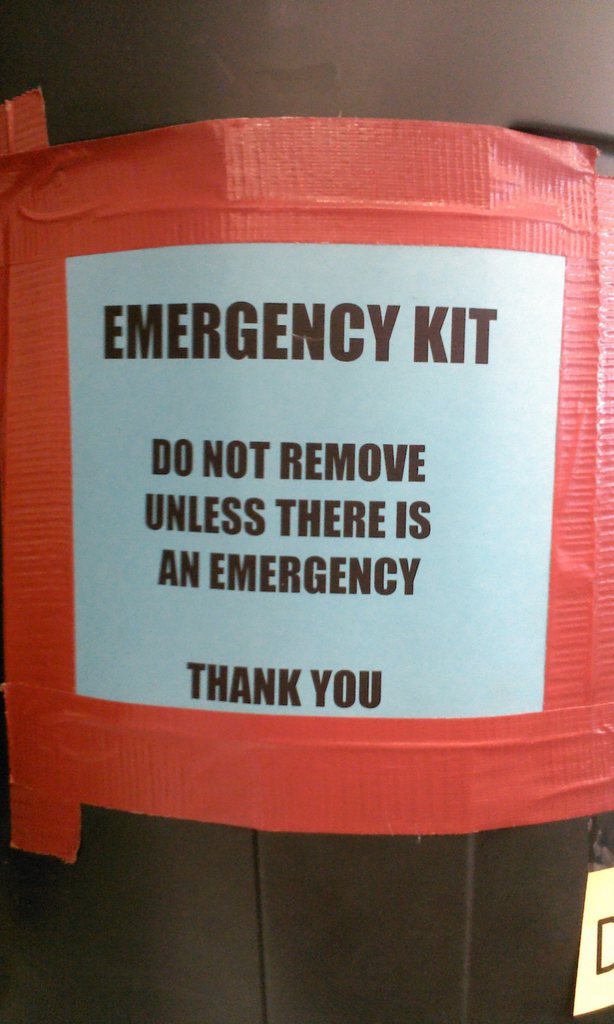 I haven't logged onto this site for a while but Heatha was kind enough to send me a nice note in hopes I'm doing alright.

I really appreciate that.

I am going to commemorate it by eating the other half of a frozen pizza Tim had made himself from scratch, dough and sauce to boot.  I found it last week.  It'll probably taste like a mastodon chipped from the tundra of Siberia but throwing it out just doesn't seem right.  Too salty for the vegetable garden compost, certainly not something the dogs may have ("no means no"), so I'll eat it.  If I'm unpleasant to be around while I do…

It was a garden party… 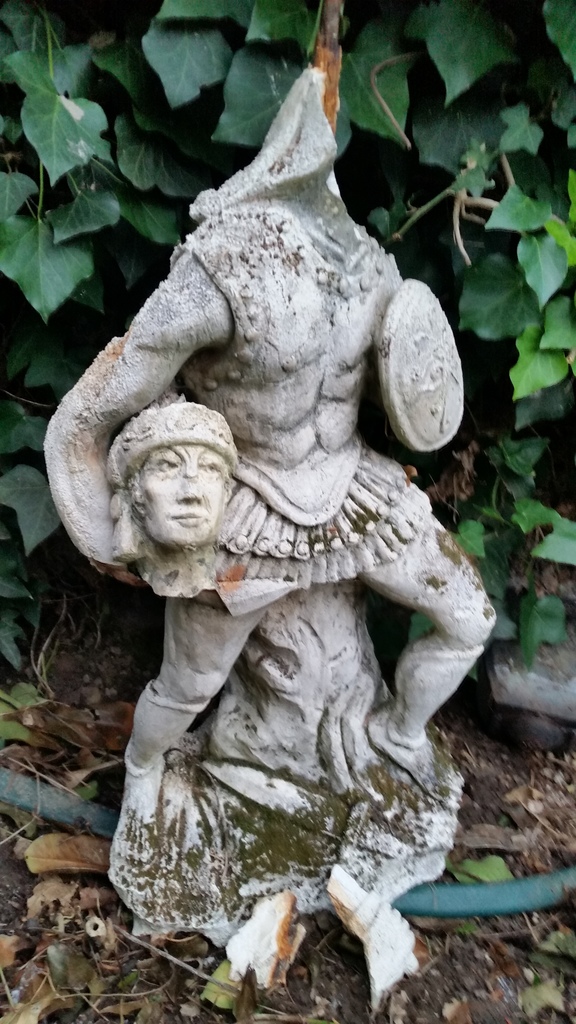 Just an ordinary day for us, Pride Day... just an ordinary photo of us riding the city's electric train to the downtown Pride Day parade.  I think we stayed for about 2 hours before heading home to see the dogs.  Every day was Pride Day, for us no need to make a big deal of it because we didn't give a damn what anyone thought.  And I still don't.  But we understood its original intent and significance; we both dealt with discrimination, ignorance, religious bigotry, downright blind hatred of…

I found this Father's Day note from the doggies 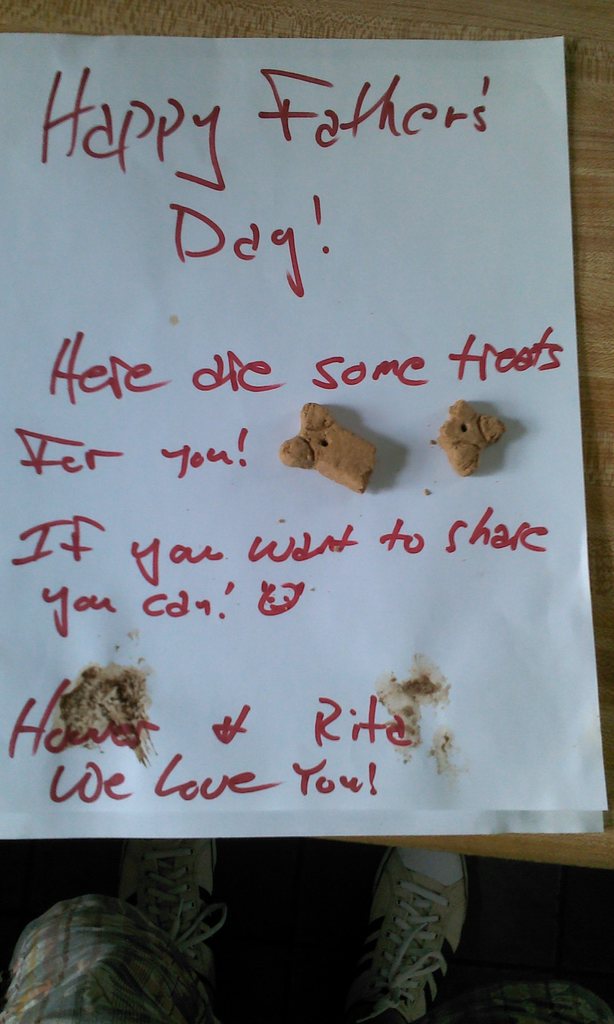 on the kitchen counter last year, next to my coffee cup, the usual place where Tim knew they'd be seen first thing in the morning, starting my day off right. 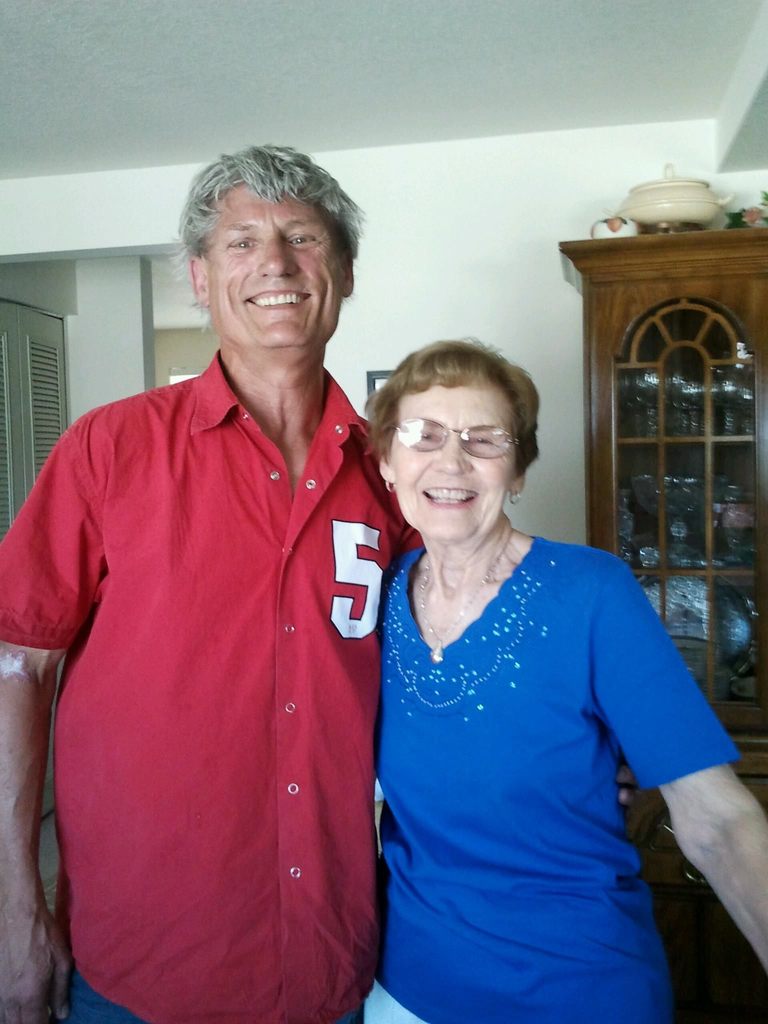 A couple years ago Tim drove my big black convertible over the mountains from Seattle to Kennewick for an overnight visit with his mom, Arlis Wennberg.  Shown is the result of 1) not using sunscreen and 2) driving a big black convertible 80 mph through the high desert of Eastern Washington.

I first met his mom in the early 1990s, shortly after we'd moved in…

Fine. Be that way. 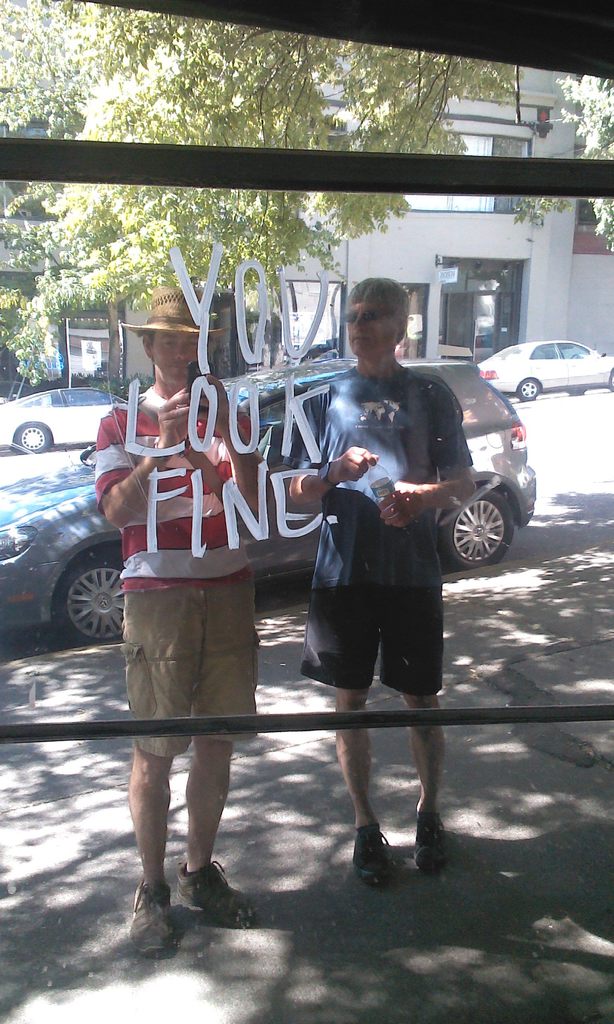 I feel like I'm just barely here.  I feel like it's all reversed, backward, looks sorta the same but not really, like I'm in some kind of parallel universe.  My family believes I'm so strong, so smart, that I have a such level head, that I'm an incredible survivor, that I'll be fine.  That's what they tell me anyway - and knowing them as I do I'm glad they feel comfortable…

Tim loved him some coffee.  I think it's a Norwegian-Swedish thing.  He also loved Tom Jones.  I took him to a concert at the Paramount in Seattle years ago - it stuck with him like we'd just come home from it.  He had excellent taste.  Most of the time.  I wasn't sure he wasn't serious when he pointed out a flavor to add to his espresso bar collection at home.  … 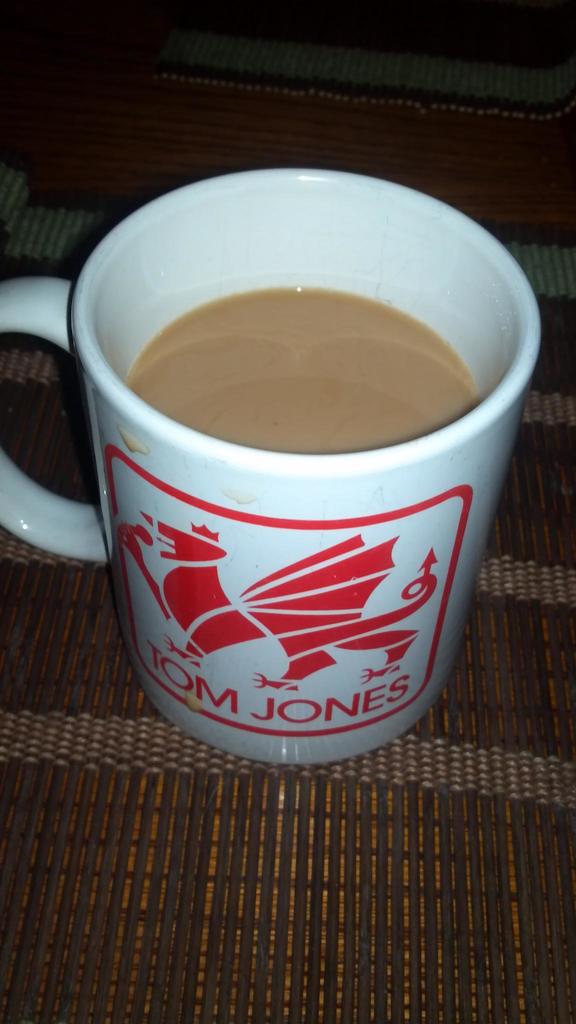 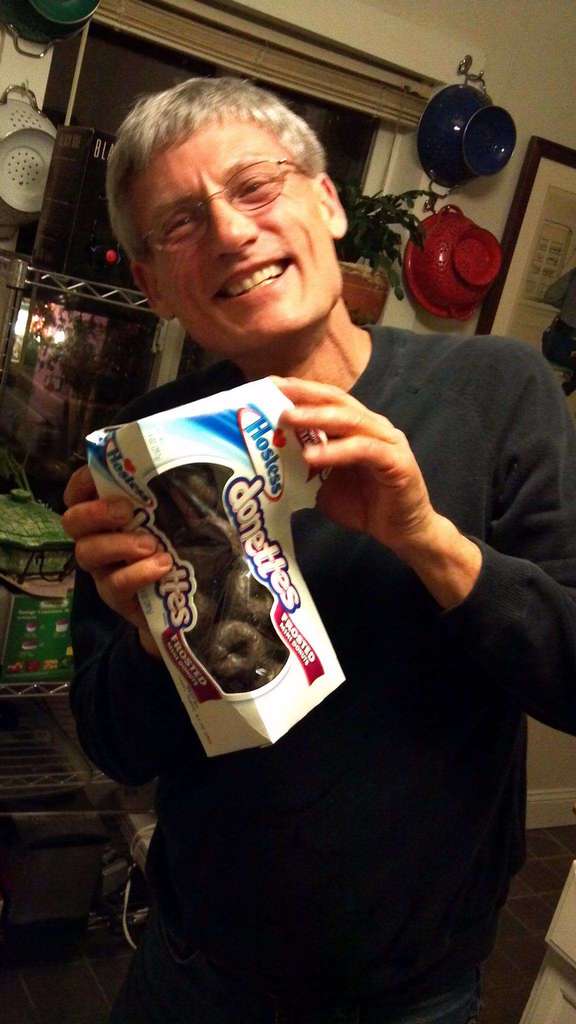 I caught him in the act, sneaking donuts that he wasn't supposed to ever be eating in the first place.  I couldn't help myself, I laughed and took his photo.  He was such an imp. 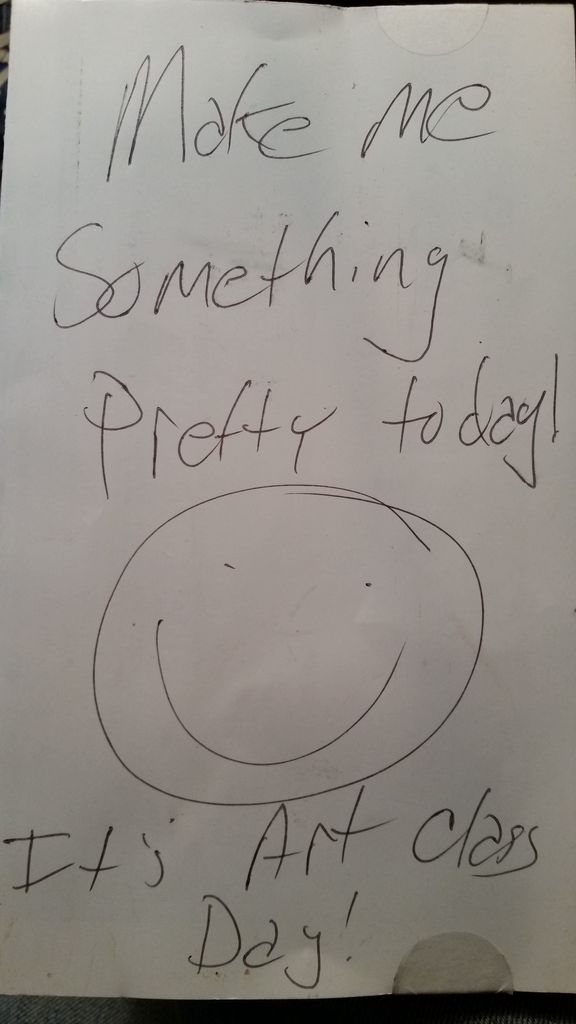 In my elementary school we didn't have a designated classroom for the art teacher, Miss Tyminski.  Instead, she would wheel around a cart laden with tempera paint, construction paper, scissors, glue and so on from one classroom to the next - for me Thursdays were always the day I could count on seeing her.  She was very pretty and very mod: dressed a lot like Samantha's…

Last summer Tim surprised me with tickets to a concert.  He really disliked public events - the event itself…

MacArthur Park Eat Your Heart Out

Tim was bound and determined to bake me a birthday cake at our campsite despite the leaky bug tent and pouring rain that didn't stop the entire trip.  He'd sneaked a box mix of carrot cake and ready-to-smear frosting into the provisions we picked up on our way.  With his Coleman camp stove and Coleman camp stove collapsible oven he pulled off the impossible.

Tim always celebrated my birthday with gusto.  Sometimes he'd surprise me with…

Tim and his kids, Hoover and Rita. 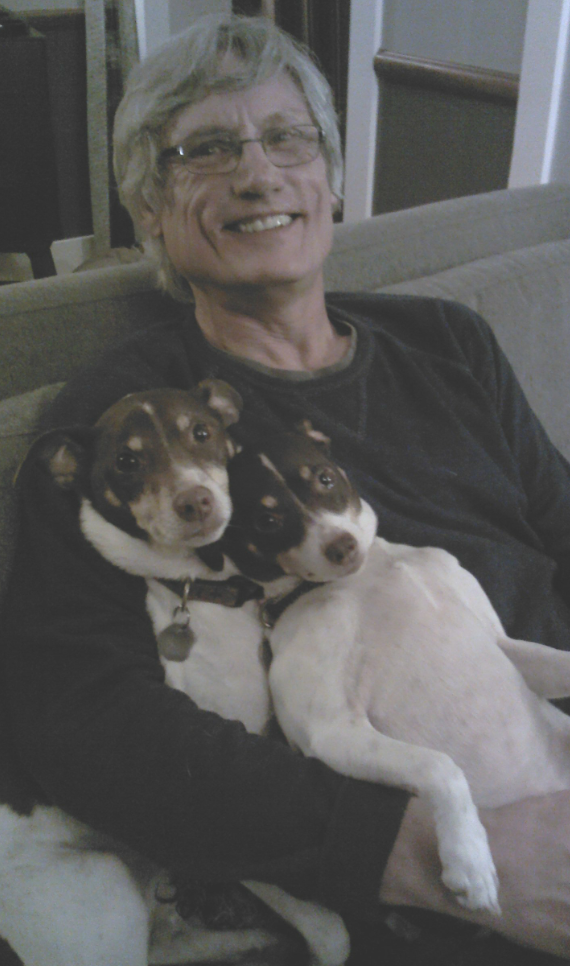 They love their Daddy very much and they miss him.

"Daddy" was sorta a joke between us... Tim being 'Daddy' and me being 'Other Daddy'.   We appreciated them equally but like most pet owners we liked to assign human traits to them, sorta a joke...

But not really.   It's not a joke when you're the one who needs someone to take care of you, when what you need…

That's my Tim in the photo.  This was taken near our house in Seattle during one of our rare snow days.  And that's Bailey's with very little coffee in his travel cup.

Tim was rare, illusive, a real life snow man - he never complained about snow, he loved it, and would stay up late into the night to watch it fall, hoping it'd be measured in feet, sometimes (dangerously) waking me to tell me it's "snowing to beat shit!", excited to go out and just be in it.  Even cancer couldn't keep…