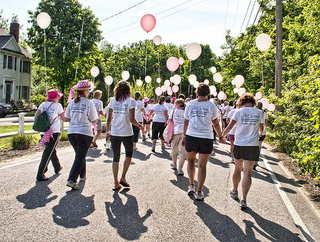 26.2 miles I walked for a man I never met. Yet I felt him by my side encouraging me as the hours passed and the challenge grew harder and harder. “Keep going,” he urged. “The pain you feel is nothing compared to the pain of cancer that I suffered from.” Jack was right, of course. Battling cancer was a far greater fight than anything that bright October day brought to me. My pain was self-inflicted. I would be rewarded with a medal. I would recover with a hot pack and some Tylenol. Jack was not so blessed, for he had lost his battle the week before. I walked for Jack and for all of the people like him that I hear about through my work at the cemetery.

I met his sister in my office when she came to purchase a niche for him. Giving up her life, she rushed into town when her brother was diagnosed. Cancer had already spread throughout his body by the time the doctors found it. Yet Jack was determined to fight. When it became obvious that this was one fight he would not win, his two sisters stayed by his side. Day and night they took care of him. He would not die in a hospital, but in his own bed in the same house they had all grown up in. It would be their final gift to their brother, to allow him to leave them in a place that held so many memories for them all.

Their parents were already gone and Jack was to be placed near to them. It fell to his sisters to make plans while still taking care of him around the clock. There were no shifts, no time off – the two women shared this task side by side, never alone. It would be wrong to call it a sacrifice, for this is not how they viewed their situation. To them it was a calling, and they exemplified the true meaning of the word sacrifice:to make sacred. Keeping their brother comfortable while letting him go was a sacred task. They never faltered and they never complained. In the final weeks there was never more than an hour’s sleep grabbed between doses of pain medication. Jack was never alone. Neither were his sisters.

They showed me the meaning of true love and commitment. It was the most beautiful love story I had ever witnessed. I had trained for seven months for my marathon and still did not know who I wanted to dedicate my walk to. Now I knew. I had to walk for Jack and for his sisters' love and devotion. 26.2 miles of love. When I grew tired, I thought of their long sleepless nights and realized that I did not know the meaning of tired. I walked. When my legs cramped and ached, I realized that I was not even touching the level of pain he suffered. The kind of pain that even morphine could not control. I walked on. When I crossed that finish line and received my medal, I knew that it was meant for him. For he was my inspiration. Jack and his sisters knew what a physical challenge meant. I only had a glimpse of it. So I walked 26.2 miles for a man I never knew, yet I felt as if we were old friends.

Nancy Weil is a leading authority on humor and grief. She serves as Director of Grief Support for eleven cemeteries and is a Certified Funeral Celebrant and Grief Management Specialist. Through her company, The Laugh Academy, she offers products to ease the stress and pain that grief can bring. Bandages for Your Heart on DVD or CD, Laugh for the Health of It on CD and her new book, If Stress Doesn’t Kill You, Your Family Might, can be ordered by clicking here.

Carol Succarotte Daniels is now a member of LegacyConnect
yesterday
Welcome Them!