Being a Pallbearer at a Funeral

Q. I’ve been asked to be a pallbearer at a funeral. What exactly is a pallbearer supposed to do? How many are there? And do I have to say yes? Frankly, I’ve only seen pallbearers in movies or on TV. 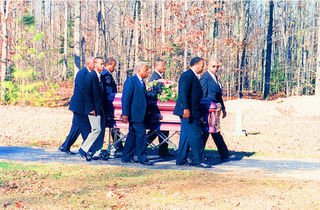 Pallbearers carry or accompany the casket at a funeral. They are friends, relatives, professional or business associates of the deceased—or sometimes members of the religious congregation. Pallbearers who do not actually carry the coffin are called “honorary pallbearers.” In the latter case, funeral home personnel do the heavy lifting or the casket is rolled out.  For example, pallbearers wheeled the coffin at Michael Jackson’s funeral in 2009.

Consider it an honor to be asked to be a pallbearer. And, yes, you should accept unless you are ill or have other physical limitations, or geography does not permit attendance. There might be six or eight pallbearers, although numbers vary. Abraham Lincoln had 22 pallbearers when he died in 1866. A 1915 photograph from the Cattle Raisers Museum in Fort Worth, Texas shows nine cowboy pallbearers on horseback at a funeral in Montana. The ten coffin bearers at John F. Kennedy’s funeral represented the Army, Navy, Air Force, Marines and Coast Guard. At another funeral, the deceased’s thirteen grandchildren were pallbearers.

Pallbearers may serve at Jewish (especially Jewish Orthodox) funerals, as well as at church funerals. Some funerals have both pallbearers and honorary pallbearers. You’ll never see pallbearers at a memorial service, however, because there is no casket. The term “pallbearer” derives from the Latin word “pallium,” a cloth used to cover the deceased back in ancient Rome. Over time, “pallium” was shortened to “pall,” a (usually velvet) cloth that covers a coffin, bier or tomb. At a military funeral, the flag covers the casket.

Do arrive at the funeral early to allow time to receive instructions from the funeral home staff on how to proceed. For example, you may or may not be asked to help carry the casket to the hearse after the funeral. Similarly, you may or may not be expected to escort the casket from the hearse to the graveside. Plan to wear a dark suit and tie. For women, who may be among the pallbearers today, a conservative dress or navy or black suit is appropriate. As a pallbearer, you will be seated up front. It is customary for the family to send you a personal note of thanks at some time after the funeral.