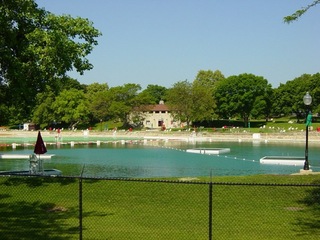 I grew up swimming in a former limestone quarry. Centennial Beach in my hometown of Naperville, Ill., had been converted from quarry to oversized recreation area in the 1930s (to celebrate the town’s centennial). Just over a mile from my childhood home, it was better than any neighborhood swimming pool because of its large size.

I wasn’t much of a swimmer in my younger years. While I had swimming lessons, I just wasn’t very strong and taking the deep water test really wasn’t something I was prepared for. At the east end of the quarry resides the deep end with a 15-foot drop. It’s there where most teens to this day still play pier tag on the floating wooden rafts covered on top with fake turf. Each day at 3:00 pm in the summer, young swimmers are invited to take the deep water test where they swim from the north end to the south end and back without stopping. Once you past the deep water test, you’re free to swim in the deep end. I tried it one summer afternoon after fifth grade and, well, I didn’t quite make it. It was a struggle and, while I might be dramatizing my experience, I still picture myself with my arms flailing in the deep water. The lifeguard who came to collect me suggested I try another day.

Several years later, well into junior high and a running career, my friends and I began to meet on a grassy area at the deep end of the place we simply called “the beach.” My strength had increased. I could make it back to a ladder from anywhere in the deep end. When a summer job during high school working around the corner from the beach required a deep water test, I aced it, swimming around the deep end for twenty minutes. I probably could have gone for forty minutes. I can still picture the strong, confident swimmer who passed the test that day. It was a challenge, but not a struggle.

Still today when I think of the word struggle, I picture myself in the deep end with flailing arms as I try to keep myself afloat. But when I turn struggle into challenge, I automatically think of the strong, confident swimmer I later became. It’s not just about the language but our perception of what lies in front of us. We can see life as a struggle or we can see life as a challenge, each situation providing us a chance to grow and an opportunity to prove our strength and confidence. Even in what may be my darkest moments, I look for challenges and embrace them. That doesn’t mean I like them, it just means I want to be strong and confident as I face them.

Comment by Michelle Rusk (Linn-Gust) on July 24, 2011 at 8:24am
Brenda, Do you want it to stop? Do you want him to stop being in your thoughts and dreams? Many people are very appreciative to have a loved one in their thoughts and dreams but maybe it hurts too much for you. Ask him if he's trying to tell you something but maybe more than anything he's just letting you know he's near. He wants you to know that he's still with you in some way.

Comment by Brenda Lee Long on July 23, 2011 at 10:35pm
This storey remided me of Lake Como In Smyrna de.That is a very wonderful place for my husbund GuyLewis Long&I We walked there alot Later in life We road our bikes down!realyMiss Him It has been almost 3yrs. Istill Miss Him Every Day