Coping - Death of a spouse after long illness

I am John, I am an Australian, I am 72 years of age and I lost a dearly loved wife in August. Betty, my wife, was ill for 11 1/2 years. I cared for her for the first ten of those years. She suffered strokes, was diagnosed with emphysaema and then, just 16 months ago, I had to recognise what I already knew but found hard to accept - she was developing general dementia. Following an aged care assessment, I had no real alternative other than to place her in a nursing home. In fact, it was a wonderful place for her and became her home away from home. Just three minutes' walk from our front door in the small country town in which we live, it was easy for me to visit her every morning and afternoon. In fact, right up to - and in the two months since - Betty's death, I have made quite an attachment to the home.

Men are in a minority in nursing homes. Ours had a high percentage of women residents but, over time, a number of men became resident, too. There were continuous therapy sessions available for the women... but none that really suited men. I spoke with the CEO and the DON, asking whether it may be possible to set up and operate a therapy group or groups for any of the men who may be interested. Yes, was the short answer, if I had the capacity and the ability, they would be very much in favour. And so it is that I do two woodworking afternoons a week, usually with two to four in the group so I can effectively supervise. It proves to be great therapy for them, offering mental and physical stimulation, creating an interest, establishing an objective and providing a sense of achievement. They are chuffed at seeing the finished articles, especially so when the items sell. (As a Government-funded, non-profit organisation, we charge the cost of materials plus $5. That's enough to keep us going.)

Now, to the bottom line. (Takes me a while to get there, doesn't it?!) Not only is it therapeutic for the men in the group, there is a therapeutic benefit for me, too. Because there can be no sharp tools, saws and chisels, etc., I need to pre-cut and pre-drill everything at home. I then take the pieces in for sanding and assembly. It means, in short, I am provided with mental and physical stimulus, designing the hobby horses, doll's carts, saddle stands, letter boxes and so forth. I, too, am chuffed seeing how well it all goes down with 'my' men. Oh, and it keeps me off the streets!

Seriously, I can recommend it as a worthy and fulfilling pastime for any man - or woman, dependent on the therapy required - to become involved. It is certainly helpful to me through my time of loss. 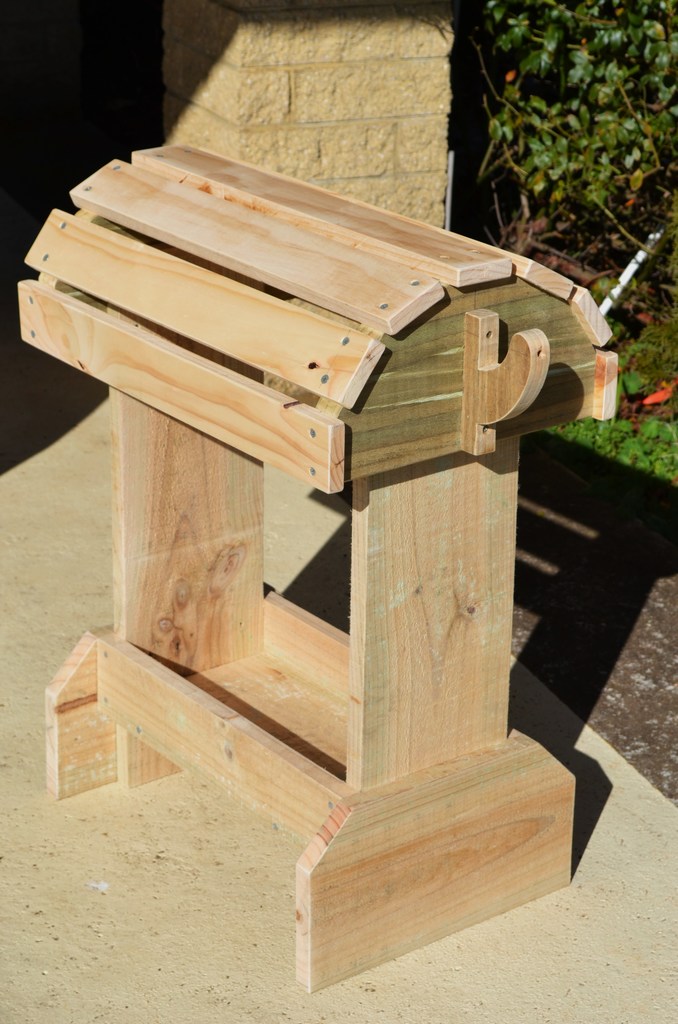 I thought some among you might like to see a couple of the projects I designed and that we assemble at the men's group I run at the local nursing home.

The first is a saddle stand. Living in a rural area, we have a lot of horse people. Many, after use, simply place the saddle over a rail, not best for its shape. I looked online for a suitable plan but found nothing that met our requirements. Instead, I found a photo of a saddle stand that looked close to what we wanted. It was then a simple matter to extrapolate photo into plan; we are all pretty pleased with the final outcome.

The one in the photograph is a single, 525mm long, but the same design can be made into a double simply by extending it to 900mm.

The second item shown is a wheelchair-friendly artist's easel. We made a number of regular easels when requested by a facilitator but there was an obvious need for something better suited to those in wheelchairs. The photo shows the end result, an easel with a broader angle in leg design to clear the width of the widest chair but with the legs then 'bent' to the vertical so as not to become a tripping hazard. The tray across the front is adjustable for height. The front wheels of the wheelchair sit on the bottom plate for the sake of stability.

Our easel was 'christened' last Friday by a lovely lady with Huntington's...and was a resounding success. We may do others as required.

I am not presenting this to laud myself or those with whom I work so much as to engender a sense of what can be in others. I lost my wife and her death was a dreadful blow; I will not allow it to be an ending, though, so much as a new beginning. If you - and this is meant for both sexes - have any skills or talents, why not put them to use in a similar vein. It is a form of great personal help to me. I find it therapeutic while, at the same time, being beneficial to those who are a part of the men's group at the nursing home.

I trust you find some benefit in doing this, or similar.

Be of good heart,