Getting Ginger was one of the few times I openly defied my dad. Mom wanted a dog, he didn’t. After their bird Livvie died suddenly in August 2005, he made it clear he didn’t want to attach to anything or anyone anymore. Period. But I thought because Mom wanted a dog, she should have one, sending me to the Albuquerque shelter where an employee led me to a fat, sad-looking white Labrador Retriever whose eyes held no happiness. He had suggested this particular dog because I explained my mom couldn’t move very fast as polio at six years old had taken its toll on her ability to walk steadily and quickly. I didn’t think this dog could make it around the block, much less from the house to the car. But when I took her home and she immediately stuck her head into a large bucket of treats, I had some idea of what was ahead for all of us. 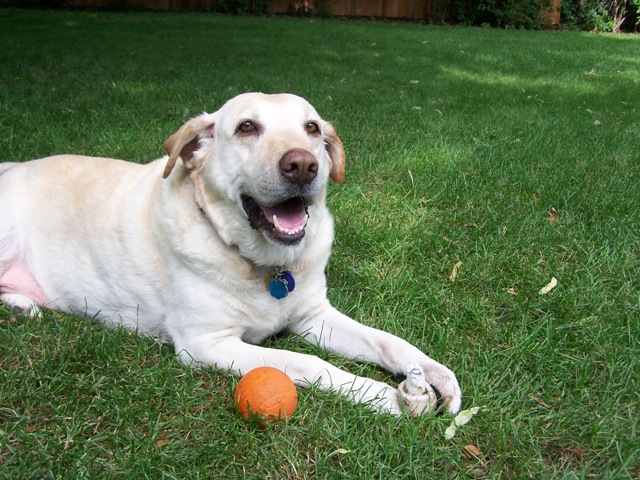 She became Ginger, as in Ginger and Marianne (my mom’s name) of Gilligan’s Island-fame. Ginger stayed with us for Thanksgiving, then the week before Christmas when I visited Chicago for Linn Family Christmas, we announced to Mom she had a dog coming. My dad wasn’t in the room when we gave her a “dog shower” but later he saw the photo album and asked about her. “Mom’s new dog,” I said uncomfortably, but with a brave face. I knew that Ginger would be his smoking partner. I envisioned him walking out the garage door with his cigarette and her following him.

We never had the chance to find out though. He died suddenly on New Year’s morning and instead of Ginger flying under the plane when a friend was slated for a trip to Chicago several weeks later, Ginger and I were Chicago-bound for my dad’s funeral. I never would have suggested a dog to Mom right after Dad’s death but there was Ginger, comfortable in her new home. Still, saying goodbye at O’Hare a few days later was traumatizing. Ginger couldn’t understand why Joe and I, the family she thought was going to keep her, were making her stay in the car while we piled out with our luggage.

Ginger became Mom’s co-pilot in a time of sadness. Her collar and nails tapped the hardwood floors, replacing the noise of Dad’s shuffle and the opening and closing of the door between the kitchen and the garage.

Somehow, Ginger became more than a companion for my mom. I’m still not quite sure how it happened but during that following year I began writing Ginger’s Gift: Hope and Healing through Dog Companionship, a personal story of how my adopting four dogs in less than three years led me to get Ginger for Mom.

The book made Ginger somewhat of a celebrity. She attended my book signing in my hometown of Naperville, Illinois, where she let everyone pet her. She and I appeared on the “WGN Noon News” television show that broadcasts nationally. Mom acted her stage mom part and brushed her in the green room while the stage crew fretted that she might relieve herself on the set carpet (which she didn’t). And her photo won third place for “The Happiest Dog” category in an Albuquerque photo contest for dogs that had been adopted from the local shelter. When I went to collect her award, a Frisbee, I explained that she lived in Chicago and the women giving out the awards laughed and said it sounded like she was on a business trip. Ginger took one trip back to Albuquerque, the Christmas after her adoption, for an epic snowstorm and to bark so much underneath the plane that the pilot announced, “For those you in first class, if you hear a dog barking, that’s just Ginger.” Mom sunk deep in her seat and pretended it wasn’t her dog.

It was thought that Ginger was a puppy mill producer, that she had several litters of puppies before being set free in the South Valley of Albuquerque. Until the spring of 2011, she lived a quiet but happy existence with Mom and a second yellow Lab, Daisy. Suddenly though, her health began to spiral out of control, culminating in a surgery to remove cancer, something she never recovered from. When I saw her in late July, my several hours at the house, just long enough to sleep and shower between my uncle’s wake and funeral, she never moved from her dog bed. The life that had returned to her for those few years after her adoption was gone again.

The last week of August, her health continued to deteriorate. I knew I had to go home, that her days were short, but my schedule and the seven-day advance purchase kept me from getting there earlier than September 1. One day before, on the afternoon of August 31, Mom went to check on Ginger, who had been in the backyard sunning herself, and found her dead.

Just over 24 hours separated us saying goodbye. Later though, I began to realize that it wasn’t goodbye. Ginger’s still here, her nails silent on the hardwood floors, her spirit and memories of those happy years lingering with us.