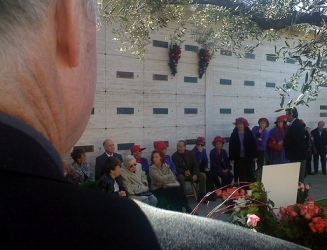 A. I was asked a similar question when I was interviewed on the national radio show “The Michael Smerconish Program” a few days before Senator Kennedy’s funeral. The fact is your “ordinary” standing actually gives you a chance to shine when surrounded by illustrious company who may be experienced public speakers. The best eulogies come from the heart and capture the essence of the person. If you had a close personal relationship with the deceased, you have unique experiences you can talk about, such as fishing in the creek together when you were growing up or playing poker every year after Thanksgiving dinner. And how many people know how frightened the person was about going to the dentist or how the deceased was addicted to cashew nuts and dark chocolate? It is little moments that mean a lot, and human traits we can all identify with that make the person come alive to the audience and allow grief to surface. When that occurs, it then becomes easier to celebrate the person’s life, even when that life was an imperfect one. If you can inject humor with which others can connect, you add to the “gift” you are giving to mourners.

Incidentally, eulogies, which are speeches or written tributes praising someone who has died, were not usual for non-public figures until the wonders of modern life dispersed families to different parts of the country—and also made us too busy to visit with each other as often as we might like. I personally never heard a eulogy at a funeral I attended until roughly two decades ago. Eulogies were less necessary than they are today because friends and relatives lived near enough to naturally congregate to reminisce about the dead. Often families got together and prepared the body for burial themselves at home. Today, the popularity of eulogies has grown to the point where not one, but several people may deliver eulogies at a funeral. When spoken with sincerity, the words help bind us together, share our memories and sadness, and begin healing.