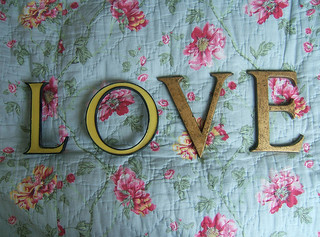 The huge box in the foyer sparked curiosity and excitement as my daughters made their way in from school. Almost in unison they asked, “What’s in the box?” “It’s our legacy,” I replied as I pushed the box into the living room. I slit the tape and pulled back the flaps, reaching in to pull out an old down quilt. Unimpressed with a faded quilt, the girls went off to find a snack while I sat back and admired the contents.

The down quilt had been my grandmother’s and she had sewn the cabbage rose cover herself. It had endured countless moves with my 86-year-old mother and now, as she prepared to relocate near my sister, she asked if I would like it.

I was thrilled to take possession of the quilt that represented the warm shelter of my childhood. I’d spent countless hours nestled in its folds in my grandma’s bed when childhood fears disrupted my sleep. Grandma never seemed to mind my late night interruptions. She would pull back a corner of the quilt and I would crawl in. Grandma’s mattress had an indentation in the center from years of use and I would happily roll towards her softness and sleep deeply, cuddled next to her warmth.

Years later, when my mother moved to Florida, I would sometimes pass the quilt in her closet and I could smell a lingering scent of grandma. Just a whiff of that quilt brought me a sense of comfort. And so I couldn’t help but think about that scent as I pulled the quilt into my lap and buried my face deep into its folds to recapture my childhood. Surprisingly, there was no lingering scent of grandma in that spot so I moved on, sniffing around the entire quilt.

A few minutes later, I called my mother. When she heard my voice, she wanted to know if the box had arrived. I told her it had and I was very disappointed. “What’s the matter Robbie?” she asked. I told her I was sitting in the living room and I had smelled the entire thing and there was no longer any scent of grandma. She began to roar with laughter and couldn’t speak for a bit. Finally, when she regained control, she told me that was the funniest thing she’d heard in a long time.

My husband returned home from work and he too was interested in the box. I repeated the story about the missing scent but he didn’t laugh. “Don’t worry,” he told me. “When you need comfort in the future, you can wrap yourself in the quilt and you’ll feel your grandma’s love.”

I couldn’t have known how soon I would need that comfort. My mother moved to California and within six weeks, she became ill and died unexpectedly. In the weeks and months that followed, I would often think how, just weeks before her death, she lovingly packed up the down quilt in that large box. She drove by herself to the post office and mailed the box so I could have a special memory of my grandmother.

Many times over the years, when I’ve felt a need for comfort, I take the quilt down from my closet and wrap myself in it. After all, it’s my legacy.

It's amazing how certian scents can bring back strong memories and feelings of the ones we have lost in death.  I long for the time when the scripture at Revelation 21:4 will be fulfilled where it mentions that "Death will be no more neither will out cry or pain be anymore the former things have passed away"  My mother passed away over 26 years ago and i can pass by something or smell something and it brings back memories.  Our brains are remarkable in that it senses and connects things together.  I long for the time when i will see her again as the Bible promises I will.  May all those who have lost dear loved ones find comfort from the scriptures and the promises from our Heavenly Father.

Losing a loved one is never easy even when it comes as a relief after a long and debilitating illness. We feel guilt because its over now and our loved ones are now resting in peace but we feel guilt because we feel guilt. Paradoxical.  Death is not natural. Even scientist can't explain why our self replicating bodies start to degenerate. I don't know if you read the Holy Scriptures it gives us the reason we finally die. Rom 5:12 But we can take comfort in the fact that they are resting comfortably as Ecc9:5,6 says deeply asleep unconscious of anything. My mother has been dead since 1996 I still miss her I know she will be resurrected when he calls

To all of you that have posted:

My heart breaks for all of you.My mom passed away this past march of alzheimers.From the very beginning,I knew that someday the enevitable would come.The last 2 weeks of her life were more than I could bear to watch.I have 4 brothers,and I was her only daughter.Of course our pain is very deep,but somehow it is different for me.I grieve everyday for her,especially this time of year.It's the first christmas without her.I think my life is forever changed without her here on this earth.Sometimes I wish it is all a bad dream,but it's not.My father is still alive and well,and I thank God every day .. You are all not alone in your grief.Maybe we can all support each other thru this web site.

aubri is now a member of LegacyConnect
6 hours ago
Welcome Them!