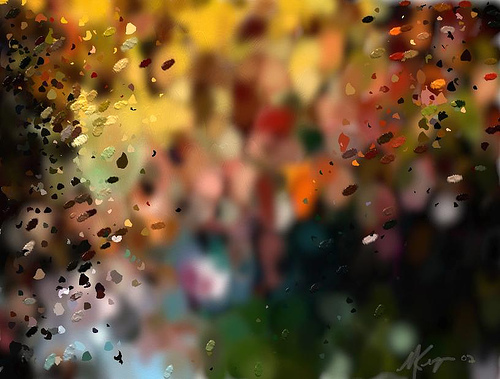 But Denise’s 20th high school reunion snuck up on me. Perhaps because she didn’t actually graduate with her class – she died in March 1993, three months before graduation. Her cap and gown, with a diploma, were delivered to my parents by the principal and her guidance counselor. At the time, my mom was upset. While she knew the school was doing something very nice, she didn’t think my sister deserved the diploma because she hadn’t finished one last required course (Consumer Education). It was one of the few times after Denise's death that I saw my mom annoyed at my sister. Mostly Mom was just sad.

When Denise was a freshman in high school, I was a senior, and I ran cross country and track with some of her classmates. Several of them are Facebook friends, and one asked me to write something about Denise for the booklet they are putting together for the reunion.

My first thought was: What do I say? It's been twenty years. All of our lives have gone on yet she remains the girl she was that March morning in 1993 when she died. I admit I have a twinge of envy when I watch the lives of her classmates, knowing we never got to see who she would become.

Meanwhile, there is more change coming in my life. Next year I will leave my hometown, the place I replanted myself after my divorce a year ago, and my mom will be going with me. My dad died in 2006, Denise is gone, my other siblings live in other areas around Chicago. For the first time since 1974, I will have no family ties to Naperville.

I believe that life brought me home to Illinois for multiple reasons. But I sense that this place is part of my past and it’s time for me to move forward. This doesn't mean I leave my sister or my dad behind; it means I take their memories with me as I live in the present and look toward the future.

Writing about Denise twenty years past her death feels much the same. We remember that she is with us, we try to learn the lessons that life taught us, but we go forward on the journey to the new and wonderful things that life has in store. Denise's death doesn’t define me or her class or anyone else, but we haven’t forgotten.

Michelle Linn-Gust, Ph.D., President of the American Association of Suicidology, has spent the past nineteen years educating people worldwide about coping with loss and change following the suicide of her younger sister. Her eighth book, Conversations with the Water: A Memoir of Cultivating Hope (due out December 12, 2012), chronicles her grief journey as she moves forward beyond the suicide and loss field. Her first book, based on Denise’s suicide, Do They Have Bad Days in Heaven? Surviving the Suicide Loss of a Si..., inspired siblings around the world in their survival after a loved one’s suicide. Learn more about Michelle at www.inspirebymichelle.com.

It is very hard for me to open up to other's about the loss of my beautiful mother. She was my life and I'm lost without her. My birthday is next week and I'm dreading it. We laughed so long and so hard. She was the only one who understood my sense of humour. She passed away from kidney failure and breast cancer. I'm on meds for breast cancer myself. I spent so many year's caring for mum. The reality that she has gone is a hard concept to come to terms with. Going back, I lost my beautiful friend of 26 years to a brain tumour in 2000. Mum was there for me all the way.  If I didn't see her, we spoke at least 4 times a day on the phone. I have her ashes in a beautiful pink, silver rose urn. She is a Pisces and always asked me to throw her in the ocean, which I promised I would do. Grief is such a lonely journey. Hit's you for a six. One step forward, 2 steps back. I feel as though I lost myself when I lost her. She was a wonderful mother. So many memories flooding my brain. I have to go now. I know she is in heaven, I know I will see her again, it's just that I miss her so.